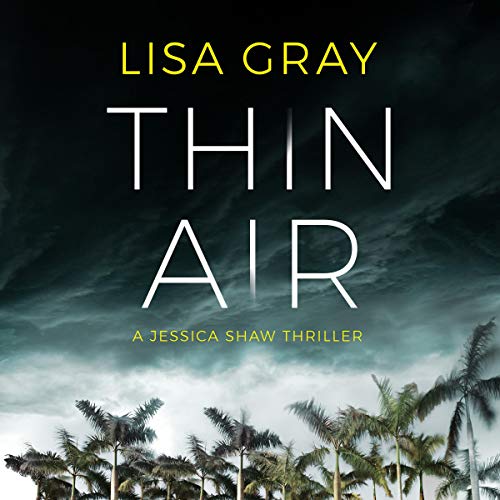 Private investigator Jessica Shaw is used to getting anonymous tips.

But after receiving a photo of a three-year-old kidnapped from Los Angeles twenty-five years ago, Jessica is stunned to recognize the little girl as herself.

Eager for answers, Jessica heads to LA’s dark underbelly. When she learns that her biological mother was killed the night she was abducted, Jessica’s determined to solve a case the police have forgotten. Meanwhile, veteran LAPD detective Jason Pryce is in the midst of a gruesome investigation into a murdered college student moonlighting as a prostitute. A chance encounter leads to them crossing paths, but Jessica soon realizes that Pryce is hiding something about her father’s checkered history and her mother’s death.

To solve her mother’s murder and her own disappearance, Jessica must dig into the past and find the secrets buried there. But the air gets thinner as she crawls closer to the truth, and it’s getting harder and harder to breathe.

“Thin Air is an exciting whodunit that kept me guessing until the end. PI Jessica Shaw is so capable and strong, I couldn’t get enough of her!” --T.R. Ragan, bestselling author of the Lizzy Gardner series

“Thin Air is an assured and fast-paced debut with a compelling central character and plenty of twists to keep you guessing until the very end.” --Victoria Selman, author of Blood for Blood

What listeners say about Thin Air

Readers annunciation and oration is terrible!

Performance isn't worth a decent book. reader is really terrible with an incredible lack of relaying speech with with any clue about people talk.

Dumbest 2 detectives ever to get a book deal.

Can definitely tell this is a debut book. Idk where to begin. The writing is VERY sophomoric. Dialog between the 2 detectives is so cringe worthy, add to that the narrator making the men sound like neanderthals and it’s complete. Omg! It was like a 3rd grade play. “Sudden light was in the sky, “Lightening” said M, “Yes, Theres a storm comin’ replied D. The narration otherwise was also pretty flat . The idea could have been a good story but this thing went everywhere,trying to have twists I guess. New characters kept popping up out of nowhere that added nothing but confusion. The final REAL “bad guy” reveal was another what/who the....?! There was even another couple “twists”, just didnt stop! I tried,even started over 4-5 times after losing interest, kept falling asleep. Save your hours,your money or your credit.

The story line was interesting however there were some plot points that lacked believability. Audible portion was awful. The person performing sounded like a computer except when she was performing the Male characters in which case it was a very bad impression of a Male voice. I had to stop and read rather that listen because it was that bad.

Was this a robot narrative?

The book story is good, but it was narrated by a computer not a person. This was the worst narrative I’ve seen. I had to stop listening on Audible and finish it reading on kindle.

OK the way it was but if you want to improve the performance aspects, you really need a male voice for the male dialogue. The same female reader attempting to sound like a male really did not work well.

New Author for me

I have never read or listened to anything by Lisa Gray before, but I will be putting her at the top of my list now. I loved the story and her metaphors were great. I look forward to reading and listening to more of Lisa Gray's books.

nothing special. Somewhat predictable. Disappointing. not much else to say about it. would not recommend

A very interesting, attention holding read. I’ll be reading more of Lisa Gray’s books. The characters are memorable and something I especially appreciate in a story was the way the names stuck with the characters in my mind. Easy to follow.

Well made book. Don't expect a lot of action but she keeps you guessing. The characters are laid out in a well paced manner, giving each one a chance to make a case for your attention. I listened to this on the ride home from Florida and when the book came to an end I wanted it to keep going. Looking forward to the next entry.

Author has potential. Looking forward to improvements in the second book, hopefully in character depth and making everything less predictable. Narrator is just a bit monotone at times but good overall. Worth a listen.

Have no idea what the story is as I gave up after a few minutes. The voice sounds like an automated system so it’s hard to get past that.

Did not enjoy this book I enjoyed in any way

This was not a book I could get into at all. I wasn’t keen on the narration or the storyline

Unfortunately this book was very disappointing because, for example: Shallow characters, predictable plot, boring story line devices. A rehash of plotlines of sixty years ago.