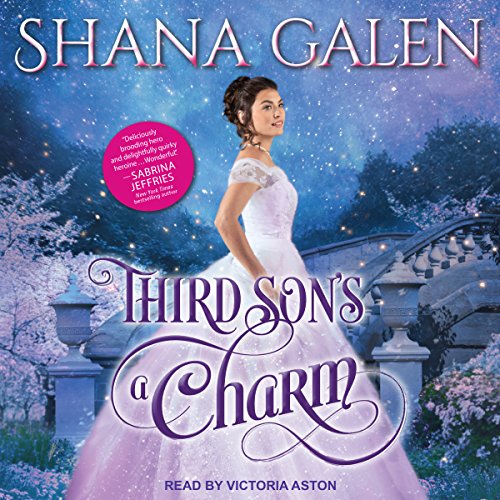 Fiercely loyal to his friends and comrades, Ewan Mostyn is the toughest in a group of younger sons of nobility who met as soldiers and are now trying desperately to settle back into peaceful society. Ewan trusts his brawn more than his brains, but when he's offered a job watching the Duke of Ridlington's stubbornly independent daughter, he finds both are challenged.

Lady Lorraine wants none of her father's high-handed ways, and she'll do everything in her power to avoid her distressingly attractive bodyguard - until she lands herself in real trouble. Lorraine begins to see Ewan's protectiveness in a new light, and she can only hope that her stoic guardian will do for her what he's always done - fight for what he wants.

What listeners say about Third Son's a Charm

This was a very good book. I really enjoyed it. Especially loved Ewan's character. He was a man of very few words, but they always meant something. I liked Lorrie too. Sometimes I wanted her to chill out, but then I got used to her character. They did make a great match.

There was a couple of twists and surprises that made the book better than just the normal romance which I liked very much. Some great dialogue, even though Ewan had less words than most. LOL

As for the narration, this was my first Victoria Aston listen and she did a great job. The men sounded like men and she read with emotion. She has a very nice reading voice too.

I am looking forward the the next book in this series.

A great new series by a fabulous author. I love Shana Galen’s book and this beginning of a new series is very good. I love Ewen. A big guy with few words and what seems to be dyslexia. Lady Lorraine does some dumb things but this is a book and I enjoyed reading it without psychoanalyzing her.

The narrator did a fine job. What kept this from being 5 stars is that it was a bit too long. And I like be long books so that’s difficult for me to state.

Bring on the next Survivor.

Too long but still enjoyable

I yearned to put on my editor’s hat and edit about 20 minutes from this book. It felt as though scenes were repeating and making points that had already been established. I did not need to be told and shown multiple times that the h talked a lot and the H could not read. Just show it as a natural part of the story.

The story and performance are both solid. Sex scenes are explicit but the language is not vulgar.

It may have been a passable book but the narrator was such a turn off that it became a rare DNF for me.

The Duke's daughter Lady Lorraine was a determined, high-spirited challenging person. She often put all decorum aside.
Declaring she was in love, she tried to elope when her father refused to give his blessings on the marriage.

Ewen was the third son of an Earl that barely acknowledged him. Due to "the letters jumping all over the page", he was unable to read. His father, brothers and cousin all thought him a dolt. Only his mother had shown any hope for him, but she died when he was young so he was left on his own. His one talent was that he was big and strong. (He was also good with numbers). This, plus, being an Earl's son, got him a position in the military. Furthermore he was fearless and recruited in the Special Forces part of the military. There were thirty men recruited into the group, but only twelve returned... Returned with nightmares of all the horrors of their experiences. They were war heroes, especially Ewen.

When the men's time in service was up, they returned and became partners in owning and running a not so honorable men's club. Ewen was a "bouncer". He also sometimes helped with the financial figures when his friend was unable to balance the books.

Ewen was approached by the Duke to be a body guard for his daughter. At first, he refused, but when he earned he was to protect her against his rake of a cousin, whom Ewen hated, he accepted the position. … Little did he know how this would affect his life.

Lorraine is a fickle girl, whose "air-headedness" and candor is hilarious! It seems impossible anyone could dislike her character, although promiscuous. Ewen and his companions are also a strange but delightful mix of personalities and friendly bantering.

The characters all seem so real and the situations genuine. With so many 'players' within the story, the author and narrator, both, very smoothly flows from one scene to another ensuring the characters are clearly distinctive. The Cover image and Title are a perfect "fit".

The Narrator, Victoria Aston, does an fantastic job in her various voices, emphasis, and all-around delivery.

I avoid most books with explicit sex and profanity. However, the profanity was used sparingly and was very brief. The story surround in the scenes - and especially the delivery of the narrator - was so well-written and entertaining, I found it impossible not to listen to it. It was very captivating from the first page to the last.

Victoria Aston did a fantastic job narrating this delightful story. Shana Galen has crafted an intoxicating story of suffering, lack of love or warmth from family, and a very capricious young woman who was stubborn, smart, and extremely talkative. The interaction between the two main characters is priceless. Don't miss this one, you'll be sorry if you do.

Cant help but love the Hero of the story and the heroine is not so bad herself either.

This is a very good story, I like the heroine spunk and hero’s fortitude. I thought the parents side reconciliation is also sweet. The narrator was quite good too.

This is a great story. Just goes to show that everyone need love no matter what upbringing you have. What job you do.

The premise of the book (& this series) is intriguing but, beyond the first chapter this book dwindled to insignificance. A little spoilt petulant teenager, a gold-digger, a dyslexic illiterate war hero turned bodyguard. That’s it. It’s quite tedious in the telling. Not even a good love triangle... irresponsible parents (on both sides), really not encouraging to continue the series.