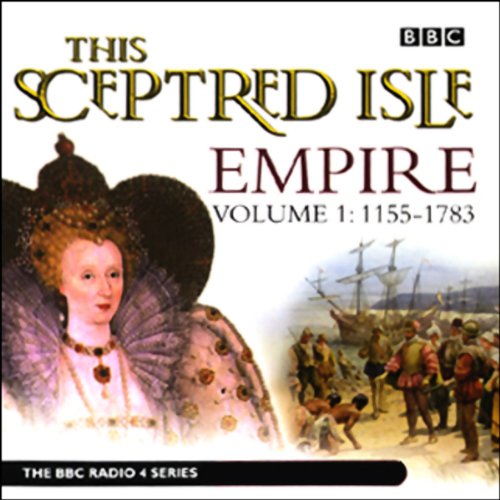 Britain had the biggest empire the world has ever known. At one time a quarter of the global land mass was British. Over a third of the world was insured at Lloyds. At his coronation, more than 400 million people saluted George V. Truly, the sun never set on this historical phenomenon. Whatever the day, whatever the hour, somewhere on the globe, the empire worked and played the British game, often absurdly so. The story of the British Empire is one of enormous personalities, adventure, scientific and maritime development, and the building of one of the most complex international administrations the world has ever seen. The series shows the history of exploration from the 16th century, but more importantly from the mid-18th century to the period shortly before the First World War.
©2005 BBC Audiobooks Ltd. (P)2005 BBC Audiobooks Ltd.

What listeners say about This Sceptred Isle

excellent into to british empire

This 90-part history of the British Empire is, at once, an “easy-listen” & profoundly educational. A work that ran on BBC in the UK, it traces how a resource- & population-poor society in England moved over several centuries to being the greatest colonial power in the world. By use of biographical & historical vignettes, with flashes of sardonic humor, the work is an outstanding introduction for the novice on this subject matter but it can also stimulate and educate those quite familiar with this history. The work takes us from the early days of conquest & colonial administration of Ireland & the Americas, through mainstream & colonial conflict with European continental powers, India, Asia, Africa, and elsewhere. As a radio program, it features stronger production values that many other audiobooks, making it a very enjoyable listen to which the reader may return many times to particular segments. And making it a springboard for further readings on the subjects discussed.

Well writen and informative. Easy to listen to. The narration is one of the best in the Audible library. The only audiblebook that successfully integrates multiple narrators. If you enjoy history or are an anglophile you will want to listen to this book.

Better than high school history in the U.S.
The narrator was well paced and held my attention.
The real motive for the Boston Tea Party

Well researched and related to both the contemporary as well as our post-modern world. Highly recommended.

I stumbled into this series accidentally while looking for history of Australia, and I am so glad that I did. This series is well-paced and informative. Its use of readers of original source material to illustrate the events as they happen is perfectly timed to allow you to understand the mindset of the people who enacted and lived the events. History buffs might find that this is too light for them, but as I definitely needed a refresher it was perfect.

My only regret is that when I got this the unabridged version was not available! I would have certainly invested in that version.

Audio quality is excellent and Juliet Stevenson's voice is pleasing and easy to listen to.

An enjoyable listen but flawed by forcing 21st century perspective on historical contexts. Example: Early 1600's piety was just another form of bigotry.(America's Pilgrims) Each episode (chapter) begins with a review of the previous episode and I found that annoying. Perhaps that could be edited out of future BBC Audible offerings. Worthwhile if kept in perspective.

I bought this title to tackle my shameful ignorance of our imperial history, and I have learnt a great deal! This is a wonderful book that I am enjoying dipping into every so often. Juliet Stevenson is a excellent narrator. If you like history and want to know more about the origins of the British Empire, I highly recommend this volume.

What made the experience of listening to This Sceptred Isle the most enjoyable?

I bought this to support an undergraduate history module on Empire - partly to use as a source of citations, but also to give me a broad overview of the lifetime of the British Empire. It's certainly succeeded in that - have thoroughly enjoyed it, have used it several times for citations, and looking forward to the next two volumes.

What other book might you compare This Sceptred Isle to, and why?

Arguably, you could compare it to works like 'Empire' by Niall Ferguson (also available on Audible).

Which character – as performed by Juliet Stevenson – was your favourite?

There aren't characters as such, but the title makes regular use of primary sources. So the way the narration is done is that Juliet Stevenson acts as the narrator, the constant presence, if you like - and when a primary source is needed, it's instead read by a different actor, either male or female depending on the gender of the writer of the primary source. For example, a male actor would read an extract from Samuel Pepys' diary, that sort of thing. All of this reading of primary sources works very well, and Juliet Stevenson's narration is excellent throughout. NB : One of the male actors for the primary sources sounds suspiciously like Rob Brydon... I was half expecting him to break out into an Anthony Hopkins, or a Michael Caine - but he never did :)

Good. As good as could be expected.. I am working my way through whole series. Thank you Mr Lee