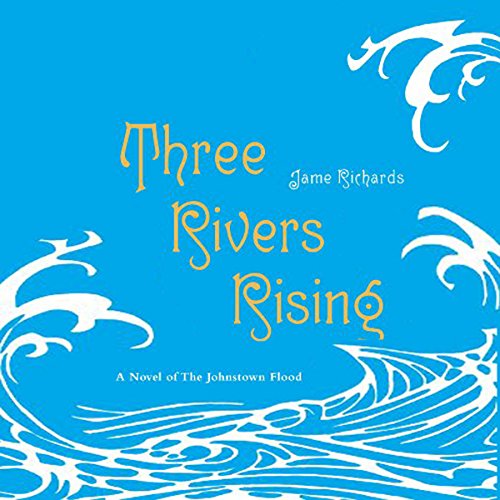 Sixteen-year-old Celstia spends every summer with her family at the elite resort at Lake Conemaugh, a shimmering Allegheny Mountain reservoir held in place by an earthen dam. Tired of the society crowd, Celestia prefers to swim and fish with Peter, the hotel's hired boy. It's a friendship she must keep secret, and when companionship turns to romance, it's a love that could get Celestia disowned.

These affairs of the heart become all the more wrenching on a single, tragic day in May 1889. After days of heavy rain, the dam fails, unleashing 20 million tons of water onto Johnstown, Pennsylvania, in the valley below - the town where Peter lives with his father. The town where Celestia has just arrived to join him.

This searing novel in poems explores a cross-class romance and a tragic event in U.S. history.

Set in the late 19th century, Jame Richards’ debut novel Three Rivers Rising focuses on a community of aristocrats vacationing on Lake Conemaugh at an exclusive retreat near Johnstown, PA. When 16-year old Celestia is seduced by Peter, a hired hand working at the South Fork Fishing and Hunting Club, gossip fires throughout the community as the young couple watches their secret romance become public scandal. Listening to Eileen Stevens and Joshua Swanson narrate Celestia and Peter’s forbidden relationship is an emotional journey — one that illustrates the difficulties of class relations in this coming-of-age tale.

The quiet lives of this community are further disrupted when the South Fork dam fails, flooding Johnstown and the surrounding communities and claiming over 2,000 lives. You feel each character’s terror and pain as the grounds of Lake Conemaugh were destroyed underneath their feet. There are five parallel narratives — Celestia, Peter, a young mother named Maura, nurse Kate, and Celestia’s father Whitcombe. Each experiences the flood individually and with difficulty, which is highlighted by the affecting, emotive narration. To hear this story from five different voices makes the Johnstown Flood all the more real and horrifying.

Three Rivers Rising is an enchanting fictional love story laid over the backdrop of the Johnstown Flood of 1889, an event that is remembered as one of the worst disasters in American history. Richards’ book is written in verse, which makes the narration all the more complementary to her writing style, as the performances skillfully emphasize the rhythm and sound intended for each line.

In the midst of tragedy, the characters struggle to reclaim the tranquility in their lives before their ill-fated vacation on Lake Conemaugh. The scandal of Celestia’s affair with Peter fades as the catastrophe of the flood intensifies. Three Rivers Rising is a captivating character study that really pulls the listener into its characters’ conflicts. — Suzanne Day

Highly Recommend! I loved listening to this book. The writing is beautiful and dramatic. It felt lovely and real. I felt like I could feel joy, sorrow, pity, love, and frustration with all the characters. The verse format did not seem out of place as a listener; the narrators performance gave it rhythm and flow.

I enjoyed it because if was fiction mixed with facts--but the narrators seemed to me to be bland not showing a level of excitement that I would have expected with situation they were caught in. Emotional level at about 1 star!!