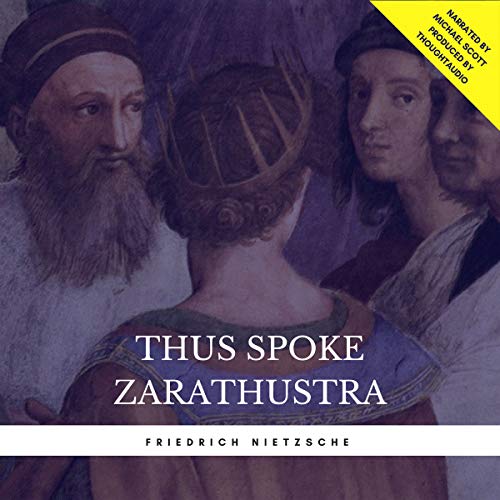 "Thus Spoke Zarathustra" is a 19th century literary masterpiece and key philosophical work by Nietzsche. Zarathustra descends from his cave in the mountains after ten years of solitude, brimming with wisdom and love and wants to teach humanity. The individual lessons and sermons delivered by Zarathustra cover most of the general themes of Nietzsche's mature philosophy, though often in highly symbolic and obscure form.

As I take the long march through more academic works (such as history by Robert Caro, awesome but hundreds of pages deep), and as I bog down sometimes in my own redundant ditches of thinking and moods, even as the fall seasons deepens, it is wonderfully refreshing to switch to something quite different. This book serves wonderfully for that, sometimes posing odd angles of thought like a blast of air in the face, or poking into one's certitudes with a sharp broomstick jab. Plenty in the PC crowd will be affronted, as with the sweeping statements on what women supposedly are. But this buffeting of norms can be bracing, if approached in the right sort of spirit. If I wanted confirmation of my anodyne biases, I would look elsewhere. Currently selling for 66 cents, this is incredible. Yes, as a story, it is threadbare, because the story is a mere prop for the ideas, which are pretty wild.
I can't say this will resonate with you, but for me, at the typical (perhaps mentally fatigued, small-minded) instant I turn this on, it is like a skyhook has grabbed me and dragged me aloft, for a different view. Others might find it sing-song and pretentious. It takes me to a very poetic and visionary sort of place.

that was odd, interesting but odd. not sure what else to say but just that