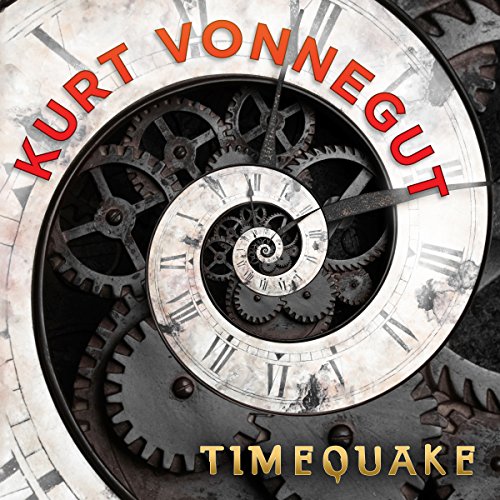 According to Kurt Vonnegut's alter ego, the old science fiction writer Kilgore Trout, a global timequake will occur on February 13, 2001, at 2:27 p.m. It will be the moment when the universe suffers a crisis of conscience: Should it go on expanding indefinitely or collapse and make another great big BANG? For its own cosmic reasons, it decides to back up a decade to 1991, giving the world a 10-year case of deja vu, making everybody and everything do exactly what they'd done during the past decade - for good or ill - a second time.

As a character in and a brilliant chronicler of this bizarre event, Kurt Vonnegut casts his wicked wit and his unique perspective on life as he's lived it and observed it for more than 70 years.

What listeners say about Timequake

Timequake was one of the first books my wife ever gave me. I don't know why it took me so long to read. I WAS a huge fan of Vonnegut 20 years ago when we first got married and I loved my wife. Clearly, I at age 23 I wasn't a fan of Vonnegut enough or trusted my wife's taste in books enough. I think I was just fearful Vonnegut was just mailing a final novel in. This was one of the last things he published, and I think it was his last novel (I might check this and find out I was wrong, it happens).

Anyway, I think all three of us were right. My wife was beautifully right in buying me Kurt Vonnegut. Kurt Vonnegut was right in writing it. I was right in waiting. I wasn't ready for this book. I'm now 20 years closer to death. I am now a father to two pimply teenagers who are sleeping tonight waiting for their parents to pretend still they are Santa and bring them goodies on Christmas morning. We are all pretending the best we can. We are all making the best of this short spin on Earth. I am now in a place where I can functionally GET the older Vonnegut better. I can get better his take on free will, money, morality, and art.

Timequake isn't a great novel, but it has absolutely brilliant parts. I love its lines and sentences better than I liked the book. It has a fantastic message about extended family and friends and community that I absolutely adored. It has so many good lines (yes, I said that before, but now I'm going to pull back the curtain):

&quot;Only when free will kicked in again could they stop running obstacle courses of their own construction.&quot;

&quot;Let us be perfectly frank for a change. For practically everybody, the end of the world can’t come soon enough.&quot;

&quot;I define a saint as a person who behaves decently in an indecent society.&quot;

&quot;...when things were really going well we should be sure to notice it.&quot;

&quot;Pictures are famous for their humanness, and not for their pictureness.&quot;

The narrator appears to not have understood the text and mispronounced many words. There was an earlier version of the audiobooks read by Lawrence Pressman that was excellent but can only be found on CD now.

As a huge Vonnegut fan, this piece reminded me of all the things I love about his writing but something felt off. The foreword admits the original draft was considerably cut down and still this book could not escape the faults of a genius aged. Witty, inspiring, yet missing the cogency of Slaughterhouse 5 or Galapagos. Sharper than God Bless You Dr. Kevorkian, but does not crack Jr’s top 10.

This book was SUCH a joy to listen to. The narrator did a great job of bringing Vonnegut's words come to life.

Kurt Vonnegut is easily one of my all-time favorite authors. This book is a perfect example of his genius. The book expertly wavers between a work of fiction and an autobiography.

I don't actually have much to say about this book aside from the fact that it was absolutely fantastic. It REALLY is a must-own for any fan of Vonnegut. Actually, even if you're not familiar with Vonnegut, it is still a must-own.

Although I give this book an EASY five stars, I still enjoyed Breakfast of Champions, (another book by Vonnegut), just a tad more. BUT - I actually enjoyed this book a lot more than the author's most famous books, "Slaughter House 5" and "Cat's Cradle". Why this book isn't more well known baffles me.

struggled to get past the tenth chapter... Slept through most of it. Usually love me some vonnegut, perhaps my mood wasn't in the right galaxy, or nebula if you will.

This book was incredible, and the actor reading it skilled. I'd highly recommend it to anyone who enjoyed Vonnegut's older books like cat's cradle, or slaughter house 5.

I've always enjoyed reading Vonneguts' prose and none of it ever disappoints. While the voice actor/readers voice is average at best, I enjoyed listening to his work read aloud for the first time. Wit, intelligence, excellent insight into the broad spectrum that is the condition of mankind. As his alter ego Kilgore Trout makes a welcomed appearance--you are brought along for an exceptional weaving of Vonneguts own history and life while at the same time experiencing "the time warp". Ting-a-ling you son-of-a-bitch... Ting-a-ling.

What disappointed you about Timequake?

This is a book about absolutly nothing. I was very excited about the premise of a "Timequake" and there were so many places that the story could have gone. I am sorely disappointed that the Author didn't have much of an imagination about where this could have gone.

Has Timequake turned you off from other books in this genre?

I will be returning this title.