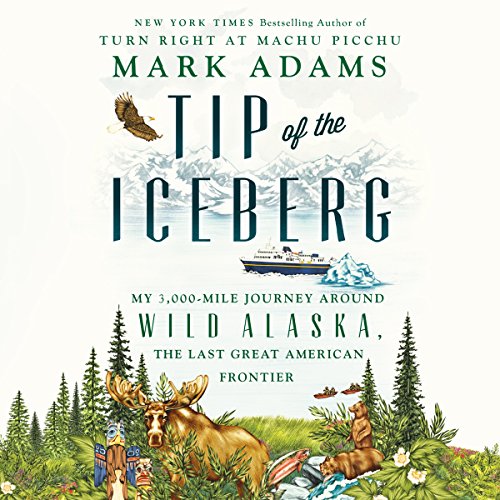 From the acclaimed, best-selling author of Turn Right at Machu Picchu, a fascinating and funny journey into Alaska, America's last frontier, retracing the historic 1899 Harriman Expedition.

In 1899, railroad magnate Edward H. Harriman organized a most unusual summer voyage to the wilds of Alaska: He converted a steamship into a luxury "floating university", populated by some of America's best and brightest scientists and writers, including the anti-capitalist eco-prophet, John Muir. Those aboard encountered a land of immeasurable beauty and impending environmental calamity. More than 100 years later, Alaska is still America's most sublime wilderness, both the lure that draws a million tourists annually on Inside Passage cruises and a natural resources larder waiting to be raided. As ever, it remains a magnet for weirdos and dreamers.

Armed with Dramamine and an industrial-strength mosquito net, Mark Adams sets out to retrace the 1899 expedition. Using the state's intricate public ferry system, the Alaska Marine Highway System, Adams travels 3,000 miles, following the George W. Elder's itinerary north through Wrangell, Juneau, and Glacier Bay, then continuing west into the colder and stranger regions of the Aleutians and the Arctic Circle. Along the way, he encounters dozens of unusual characters (and a couple of very hungry bears) and investigates how lessons learned in 1899 might relate to Alaska's current struggles in adapting to climate change.

“Great nonfiction... takes a topic you thought you knew well and makes it new again.... [Adams’s] storytelling is guaranteed to make you want to get off your beach towel and book passage somewhere in the great wild north.” (Outside)

“Adams gives readers an eye-opening look at the past and present history of a fascinating region.” (Publishers Weekly, starred review)

What listeners say about Tip of the Iceberg

I loved the chapters about the bear warnings and bear encounters. I learned so much from this book while being truly entertained.

The Iceberg is Massively Satisfying

Never a dull moment. An engaging survey of Alaska through the lenses of history, geography, biology/natural history and sociology. The prose is crisp and engaging. I’ve purchased copies as gifts and am listening to it for a second time.

Time to go to Alaska

What a wonderful book! History and current events wound together in perfect harmony ! I want led to visit Alaska before, now want to experience Alaska!

Alaska with humor and realism

Adams did a great job narrating his book. I’m always skeptical of authors not from Alaska trying to present a version of it, but Adams really did his research, and presented an impressively realistic version of Alaska with humor, while impressing upon the reader the issues Alaska faces with climate change. I love that Adams didn’t downplay the decrepit look of places and strange characters. He got those spot on. But also showed despite the bizarreness, Alaskans know how to live in and around nature and survive, despite whatever the elected leaders are doing.

Mark Adams does a good job narrating his book about exploring Alaska via Harriman’s late 1890’s cruise that included John Muir as a passenger. Interesting to experience both the original expedition and modern day Alaska through Adam’s eyes.

Enjoyed this very much!

Good adventure/travel story with some interesting history. could have used a little better editing to make the 2 stories more clear.

Overall a very nice history presented in a story form that makes it feel like historical fiction, even though it is not. There were some comments expressing this taste about the climate change commentary at the end, I did not feel these to be inappropriate. I am fairly apolitical, but reality is reality. In fact, there was much objectivity presented regarding facts that imply much natural cycling, including references to lost glaciers long before the industrial revolution.

This was good enough to pique my interest to further explore the life of John Muir.

This is my third Mark Adams book and I have to say I just love his writing. He always makes me feel so involved in every story. Very glad to hear the author reading his own works. Enjoyed this one very much and will definitely be listening to it again.

Not an adventure story

Much reference to Harriman expedition. Some references to bears. Mostly discusses the towns and people you would encounter while making this trek. Reads much more like a road trip journal than an adventure.