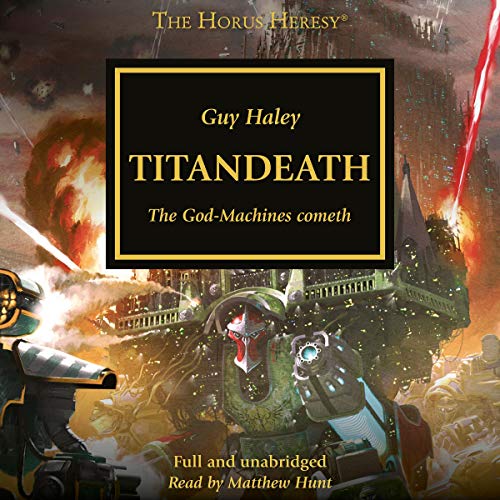 War is unleashed on Beta-Garmon as the armies of the Emperor attempt to hold back the tide of Chaos in the last major clash before Horus reaches Terra itself - and the God-machines of the Adeptus Titanicus are on the front line.

Read It Because: The long-awaited and much-teased battle of Beta-Garmon is here, and with armies of Titans clashing in brutal no quarters combat, Guy Haley has crafted a remarkable tale.

The Story: Horus’ armada gathers, and he has defeated all enemies sent against him, even the Emperor’s own executioner. One barrier remains before he can strike for Terra and lay waste to the Emperor’s dream.

The Beta-Garmon system occupies the most direct and only viable route to the Solar System and Terra. To break it, Horus assembles a war host of incredible proportions and Titans in untold numbers. To lose here is to lose the war, and Horus has no intention of turning back. But the Imperium understands the importance of Beta-Garmon too. A massive army is arrayed, comprised of near numberless army cohorts and a mustering of Titans to challenge even the martial might of the Warmaster.

Titans fight against Titans as the God-machines of Loyalists and Traitors alike go to war. This conflict will be like no other before it, a world-ending battle that will determine the next phase of the war.

the worst 40k book ever.

skip this one. you won't learn anything new or cool about Titans. in fact this book ruins a lot of the lore surrounding the princeps themselves. also you can expect lots of current year politics. in other words this book is one giant feminist rag. none of 40K is based in reality but this is a Step Beyond stupid into the retarded. HORRIBLE

Diving into the grains of the machine cult.

While this is not the entry level parlance dictionary into the heresy you might be looking for:
The premise that this is supposedly 'the worst book of the Horus Heresy' seems to be predicated on it following a Marshall Sorority within the mechanicus and collegia titanica.
As we get a deeper look into the world of the dark mechanicum, the intercollegiate politics of the crusade and biological childrearing within the cult. All the while fleshing out the khan, dorn sanguinius and Malcador and giving us a last check in with both horus and legio Mortis.
I can only surmise that the view that this book focuses solely on missable characters could only be sourced from someone either wilfully overlooking, or being entirely ignorant of the Transhumanist nature and implications of that within the mechanicus. As well as the importance of the primarchs involved in the conflict.

a somewhat boring conclusion to a huge set up

the Battle of Beta Garmon has been alluded to as a massive battle between the biggest forces of Titans in the HH and ever after.

I was really excited for this entry. it isn't bad. there's an interesting personal story throughout the whole novel, but we are here to see this massive battle unfold and this story feels very small. the few set piece battles that occur are essentially glossed over and the sense that this massive campaign over the course of a few months isn't really conjured here. more time is spent on describing how the battlefield is cleaned up than that actual battle itself and the presence of two primarchs are barely felt at all.

overall I was pretty disappointed. Tallarn and Mechanicus and Vengeangeful Spirit do a much better job of capturing the essence of what a Titan fight really feels like.

as always though Keeble is the best narrator I've ever heard. Guy Haley's stuff is generally passable but not on the level of Abnett and Dembski-Bowden.

Guy Haley delivers another fantastic work of science fiction. exciting. heartbreaking. And fantastic stories of giant robots smashing each other.

Great book. Guy Haley did a great job of depicting the men and women who command the God machines of the collegia titanica.

If you like titans this is the book for you

Great buckets of delicious titan lore ooze from this work.
The narration is also on point.
Will ve re-listeling to this soon.

25 pages of how it feels to fight a titan per 5 pages of action.

Amazing voice acting engages you fully into what it means to fight inside of a metal god of war. Voids go down and titans fall in one of the best warhammer novels I’ve ever listened to. The biggest Titan on Titan battle in the history of the empire of man takes place with two primarchs involved. If this doesn’t make you consider taking out a second mortgage to afford the Warlord model I don’t know what will.

literally only like three or four characters had voices that seemed appropriate, others were terrible.

Repeating the same line over and over is not good writing. Unfortunately, way too many books have this flaw. Common, and bad.

Possibly the dullest of the series

Titandeath proves once again its near impossible to conjure any excitement around machine warfare, and it's almost a relief when the action moves away from the deathly dull Titan crews to anybody else. Fully two thirds of the book is devoted to uninspiring characters and scenarios, the better to garner sympathy for their fates or motivation for their choices. It doesn't work: origin stories this far into the series only work if they bring something new and vital to the mythos and this is the first reason Titandeath fails.

The second is the scope: limited to just a single House and a prolonged engagement with nothing of the wider war or individual unit actions. The war then ends abruptly, though how the deciding blow arrived or the role of the Khan in the outcome is left to guess.

The one highlight is Sanguinius - the assault from orbit is nothing short of phenomenal and reads like the opening of a Mission Impossible film. Gone is the stilted and often hackneyed script that typically accompanies the Lord of the Blood Angels and instead we see him unleashed (all too briefly) in the books real highlight. Otherwise a slow start, unexciting middle and an abrupt, weak ending.

The war we have all waited for!

Jonathan Keeble once again delivers a action packed addition to the Horus Heresy series. With the story of Beta Garmon constantly teased it has always been widely expected to be a event of dire apocalyptic proportions.

The story centres around three primary characters who represent the different mindsets and the different goals of the campaign. A titan princeps of the Imperial Hunters who tries desperately to make her legio's mark of the conflict ridden worlds. Another Princeps of the infamous Death Stalkers attempts to reach higher states of glory with the Warmasters forces and communion with his blood thirsty God engine. The last is Sanguinius, primarch of the Blood Angels legion. Whom exhaustively tries to unify the feuding forces under his father's banner even though his has become more and more disillusioned with the war and his own part to play within it.

when combined with action packed engine war, obsence amounts of lore and a host of rich and well designed secondary characters. TitanDeath is a fine edition to the closing series of 30k books and a must read for any Fan of the Horus Heresy, Titanicus range or just one of Grim Sci-fi action.

loved it. nice steady start into a glorious battle. Brought personality to the titan legions.

Very well performed, only issue being at the beginning of the book the amount of names of the titans can get confusing

You know the kind of book you pick up and is hard work, you have to work at it to read. This is actually like that listening to it, I have munched my way through a lot of the Horus Heresy books by listening to them. This has taken nearly 2 months! There is no plot to it, negligible story a lot of indulgence to the woes of being a Titan princips and walking. The names of all the characters are complex and very similar (as are the titans) they dawdle around in like a monstrous collection of oversized Eeyores moaning. So you have no idea who’s who and who is doing what - no sorry you have a clear idea of what they are doing ‘moaning’ and complaining about the woe of life. I was advised to read the book, by someone who hadn’t read it, because it would give you an idea of what it was like piloting a titan. If that is what it is supposed to be like I think most of them died from boredom. Jonathon Keeble does a good job of a performance, but essentially you can roll a turd in glitter, but it’s still a turd. I was going to give this an overall two stars to allow for Jonathan Keeble’s performance being good. But the book itself is so bad I feel that even giving it one star is too generous (I can’t give no stars for the story because the app won’t let me otherwise I would). Seriously do not buy this book the plot is simple **SPOILER** matriarch Titan house wander around failing and moaning and getting shot at by traitors they have some scraps everyone dies and the traitors carry on to Terra minus a few moaners who got blown up The End. Move on to the next Heresy book with an extra credit in your account (if you paid £28 for this book ... #massivefacepalm).

Pretty boring and over long

If you love titans and battles then maybe this is for you. Not so much if you like the primarchs, heresy, story and space marines.

The build up to beta garmij has been huge but what was this??

death on an epic scale

This was another fantastic installment of the Horus heresy. When titans go to war, you have the making of heart pounding story with death on an epic scale. This book really sets the scene for the siege of Terra.

Never been much of a Haley fan but this story is excellent, manages to give a human perspective on these most inhuman of war machines and the people that live their lives around them. J-Keebs is just the cherry on top. Well worth a credit.

the performance was great, chaos titans are great, main characters are very, very forgettable. still worth a listen.

This book really give you a insight into the enormous scale of the war for beta garmon. Bringing the titan legios to the for front of the war. A truly thirilling story and would definitly recommend if you a fan of the series.

not bad but not great

Really enjoyed his last couple of books, I used to avoid Guy Haley but his latest Heresy Novels have been great.

Keeble is a fantastic narrator, as always.