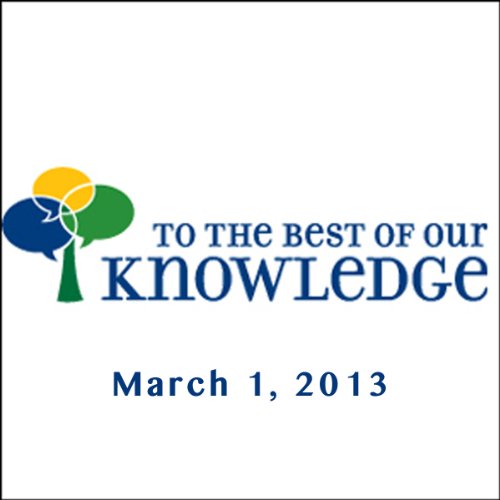 To the Best of Our Knowledge: American Invention

In this hour, if we’re going to talk about invention in the US we need to talk with Nathan Myrhvold. He was Microsoft’s first Chief Technology Officer. He holds 17 patents with Microsoft and 117 with his company Intellectual Ventures. But he’s not just a billionaire tech-nerd. He’s also explored the world’s volcanoes. Studied penguin digestion. Found several T Rexes. Built a section of Babbage’s Difference Engine. He’s even the World Barbecue Grand Champion. Anne Strainchamps caught up with Myhrvold to talk about inventing and his six-volume, 2400-page, 52 pound cookbook called Modernist Cuisine.

Next, why has America stopped inventing? That’s the provocative title of a book by Darin Gibby. Gibby’s a patent lawyer and points out that Americans invent less than half of what we did a century ago. Half. Why? Are we less creative then we were 100 years ago? Gibby says the problem lies in one place and one place only – The US Patent system. He tells Anne Strainchamps the current system has got to go.

Then, in a recent interview with Wired magazine Bill Gates said that if he were a teenager today, he would not be into computing, he’d be hacking biology. He said, “If you want to change the world in some big way, that’s where you start – biological molecules.” Hacking biology, huh? Well, it’s not science fiction anymore. Welcome to the 21st Centrury and the Biopunk Movement where biohacking and kitchen table biotech are the norm. Steve Paulson sat down with journalist Marcus Wohlsen, author of Biopunk, to find out more about these DIY bioengineers. Like, is this legal?

After that, don't ask Anna Dietrich if she invented a car that can fly. No one can do that she says. She did, however, invent a plane that can drive. It’s called the Transition. This car/plane or plane/car, whatever you call it, was dreamed up over beers with a bunch of fellow MIT students. The Transition’s recent introduction at the 2012 New York International Auto show was the talk of the town. Did Anna Dietrich have a moment where she just sat back and said, “Wow, I invented that.”

Finally, Robert Glasper is a Grammy nominated jazz pianist. He’s also the musical director for the rappers Q-Tip and Mos Def. And he’s the pianist for R&B singer Malwell. In his own work, he brings all those genres together into a new form – I’m not sure what you call it. Glasper calls him new album Black Radio. He tells Steve Paulson it’s a reference to the black box of recordings that survives a plane crash. [Broadcast Date: March 1, 2013]