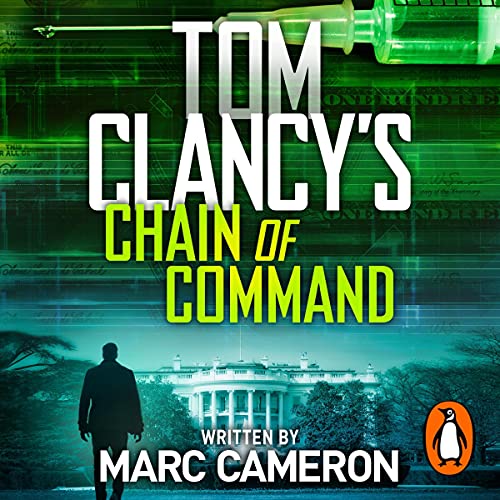 America is under attack from within. Patients in hospitals, clinics and at home are dying when the drugs they need for survival turn out to be ineffective copies. A corrupt pharmaceutical billionaire has spent millions supporting radical groups while using the chaos they engender to cover his money-making schemes, but for a man with such towering ambitions, the only real goal is power.

To get that, he'll have to eliminate the only impediment in his path - Jack Ryan. The question is, how do you attack the most closely guarded man in the world? For a man who has built his fortune on underhanded dealings and misdirection, the answer is as simple as it is shocking.

He'll have to kidnap the first lady.

What listeners say about Tom Clancy’s Chain of Command

Easy storyline and predictable outcome.
Make something happening to the characters or this book series will die out

Enjoyed the audiobook, but English accent is iffy.

I've enjoyed the Ryan series, looking forward to the next one coming out, hopefully soon.

Another Clancy novel not to miss. Definitely 5 *+

To keep you on the edge, this definitely will. Brilliant story and narration. That will be wanting more until the very end.

Brilliant story fast moving and gripping. A joy to listen to. Cannot wait for the next one.Thank you.

I really enjoyed this book - a real edge of your seat political thriller which keeps up the pace throughout. There is a lot of detail which adds credibility without feeling overwhelming. I’ve not kept up with all the books in the series although this still works as a stand-alone read. The narrator was really good and really brought the story to life.

this book is all over the place.

it seems to be saying look at this look at that look over here it's trying to pull the magic trick but doesn't seem to work. enjoyable enough but not worth a reread.

Honestly was looking forward to this new book but it fell flat for me the story line wasn’t so bad but I mean why involve the campus if they are not on a front seat of the action , it’s a shame to have this tittle on the Tom Clancy collection , If it weren’t for Scott brick wouldn’t have finished this book

could have been Tom Clancy himself

Great story, extremely well written and well read. can't wait for the next one A1