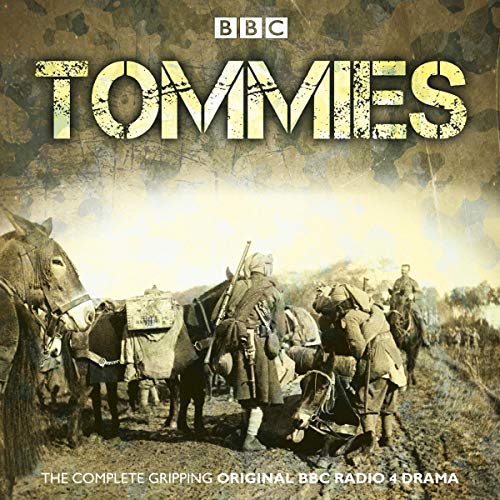 A major BBC Radio 4 drama series following the lives of those on and behind the battlefront of World War I.

Meticulously based on unit war diaries and eyewitness accounts, each of these 42 episodes of Tommies traces one real day at war, exactly 100 years ago.

We follow the fortunes of Mickey Bliss and his fellow signallers from the Lahore Division of the British Indian Army as they experience life - and death - on the front line. Meanwhile, Dr Celestine de Tullio battles to save soldiers suffering from gas gangrene and trench fever - and experiences the fighting firsthand when she enlists in the Serbian Army and commands a dangerous offensive.

They are all cogs in an immense machine, one which connects situations across the whole theatre of the war, over four long years. Through their voices - and a host of others - we hear untold stories about the conflicts in Gaza, Gallipoli, Salonika, Serbia, Mesopotamia, Russia, Macedonia, Italy, Turkmenistan and Tanzania as well as on the Western Front.

Lee Ross, Pippa Nixon and Indira Varma are among the extensive cast of this gripping series, created by Jonathan Ruffle, who produced the acclaimed real-time radio dramatisation of Len Deighton’s Bomber. Based on actual historical records, it paints a vivid portrait of daily life for soldiers and their families during 1914-1918 and sheds new light on the reality of the Great War. Also included is a bonus behind-the-scenes feature about the making of Tommies.

What listeners say about Tommies

I was so excited when I found "Tommies." I tried to finish, but I just couldn't. It's a great idea in theory, but it didn't translate for me. For starters, it's disjointed. There is an overhead narrator that keeps interjecting random storytelling ideas, like places, names, thoughts, while the characters are having conversations. It's like Scrooge when he is observing all the moments in his past, present, and future life in "A Christmas Carol." It's very distracting. Again, I wanted to really like this program, and I'm sure some will. It just wasn't for me.

A Somber Look At World War One

I thought this series was incredibly well done. However, I would add the caveat that it might not appeal to those with only a passing interest in World War One. For the history enthusiast so, Tommies is radio drama gold. From the mundane to the terrifying, Tommies gives you a glimpse inside the lives of the men and women who fought, bled, and died during those cataclysmic years. The sound effects alone make this a great listen. I particularly appreciated that it covered some of the forgotten fronts like Africa and the Middle East. If you enjoy reading (or listening to) stories about the First World War, then get this series without further delay.

Great, but there is a chapter missing

I listened to much of this series when broadcast and I'm glad that Audible have the entire selection. It's a ground breaking look at the great war from a unique perspective.

A reviewer mentioned that one of the chapters was missing. This appears to be fixed as I compared the version streamed via the echo and my own download. The download was incorrect so anyone with this issue can delete the download and retry it. I note however that the additional documentary about the making of the series is not yet included - I hope this can be added in because it would be interesting to here what the crew have to say.

A stunning work of art

Originally, I was gutted to find that despite the title of the CD this wasn't the complete series at al. However, this seems to have been rectified in the months since then and I am able to give it five stars.

This series is a stunning work of art. I was blown away by it when I heard it on Radio 4, and was desperate to own it, so I was delighted when it was released on audible. It is painstakingly pieced together from documentary evidence so that each day actually depicts events known to have taken place. It's a quite incredible feat.

Everything about this series is amazing - the acting, the writing, the sound production are all incredible. It is completely gripping, and you learn so much from it (especially if you listen to Home Front too, which gives the view from the home front.) Each episode flies by as it is so compelling. I really do think this should have won every award going and a copy should be kept in the Imperial War Museum.

Excellent series. Each episode is around 40min long. At the end of each episode forward 1min and your at the start of the next one. It is a glimpse of different days of ww1 through the eyes of alied soldiers and glimpses into the role of women on the front. All of these day diaries link up into a connecting story line. The nirater also explains how equipment is used and how it improves over the duration. Very well performed and great listening. Well done BBC 4

So glad to have the entire series to listen to after catching the last few months on BBC Radio 4. 39 episodes were broadcast in all, each of 45mins, plus a 15min behind the scenes programme. The Download contains 42 episodes at approx. 45mins each. So, although the 15min extra is absent, there seems to be 3 episodes more than were broadcast, unless there are duplicates. Far from being incomplete, this download seems to be supracomplete. I hope to confirm this once I have listened. Thanks Audible.

Really takes you back in time to WW1. Great characters and story. Def worth a credit

This collection truly engages the reader. The horrors of the First World War are described in great detail. The physical, emotional and psychological traumas experienced by the soldiers at the front make this emotional and at times harrowing...the characters and settings throughout the stories bring the realism to life such as the idea of promotion within the rank and file being described as the filling of dead men’s shoes. The armies and their supporting cohorts were treated like animals, their lives expendable on the fields of battle...the staff at headquarters moving thousands of soldiers and equipment as pieces on a chessboard...madness ensued. The presentation and the quality of the actors added to the standard of this production.

I dipped into this over a few weeks and it was my companion on long walks, doing chores etc and I enjoyed every minute.

I couldn’t imagine the horrors of the war and the conditions the soldiers lived in but this series took me there.

Worth my time and my credit. Will relisten in the near future.

an amazing story and a fitting tribute to all the men and woman from top to bottom that had to fight in one form or another.

A harrowingly addictive series. Sadly beautiful and informative account of those who gave their lives for their country.