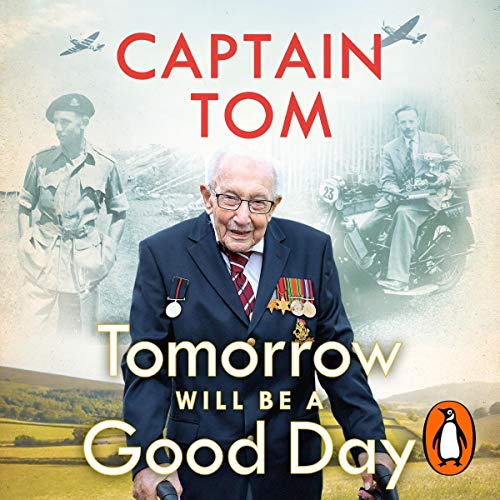 The extraordinary, heartwarming autobiography of Captain Tom Moore, the man who captured the nation's heart in lockdown.

Captain Tom Moore is an inspiration.

At the height of the Covid-19 pandemic in early April this 99-year-old Second World War veteran came up with a big idea: he'd walk laps of his garden to raise money for the NHS. Despite using a walking frame as well as having had recent treatment for cancer and a broken hip, he was determined to hit £1000 by his 100th birthday on 30th April.

By the time the telegram from the Queen arrived, he'd raised over thirty million pounds.

In this, his official autobiography, published in support of the creation of the Captain Tom Foundation, he tells us of his long and dramatic life. How his spirit was forged on the battlefields of Burma where victory was snatched from the jaws of defeat. How he fearlessly raced motorbikes competitively. How, in his 90s, he took off for the Himalayas and Everest, simply because he'd never been. And, finally, how this old soldier came to do his bit for the NHS, becoming the nation's hero in our darkest hour.

A modest, decent, charming man with a can-do attitude and a twinkle in his eye, Captain Tom's story is that of a man whose insatiable curiosity and appetite for life have led him around so many unexpected corners - finding both adventure and joy.

He only wanted to help other people - and yet he has inspired a nation to believe anything is possible by reminding us all it is never, ever too late.

What listeners say about Tomorrow Will Be a Good Day

What a special guy and a fascinating book. A trip through memory lane with areas that I'm familiar with in the North of England.
RIP Tommy Moore.

What a fantastic book. Such an amazing story, what a full and packed life Captain Sir Tom Moore has had. Loved it.

What a man, what a life! This book is absolutely delightful from start to finish. Well done Captain Tom. Highly recommend.

I enjoyed this so much, Derek Jacobi, for me fell into being Capt.Tom Moore, I am not sure if it was intentional but it made it all the better and drew me into the book more. The honesty, love and kindness of Capt.Tom Moore as he represents himself provides warmth, history, interest and easy listening. What a gentleman.

loved it, especially finding out about captain Tom's life not the least about his time in the army

Absolutely loved this book. What a truly inspirational gentleman. Thinking of you Captain Sir Tom

An excellently narrated and humbling book. A must read /listen for all, young and old

The Man has lived a grate life love hearing the stores of war, love and family funny and hart warming.

I really enjoy this brilliant book. I couldn't wait to finish it. Very easy to listen. Great to hear about the history of Tom's life. Wonderful and gentleman

What a hero captain Tom Moore is!!
As a member of the conservative party, he proves that Tories aren't all heartless, as the media like to portray! An Inspiration to us all!🇬🇧

One life can affect so many, and at any age too. I am half his age and can feel passed by at times, but his life really took shape in his 50s, i am so glad he wote this. R.I.P.

spellbinding story, so interesting to hear about his life and how times were back then.