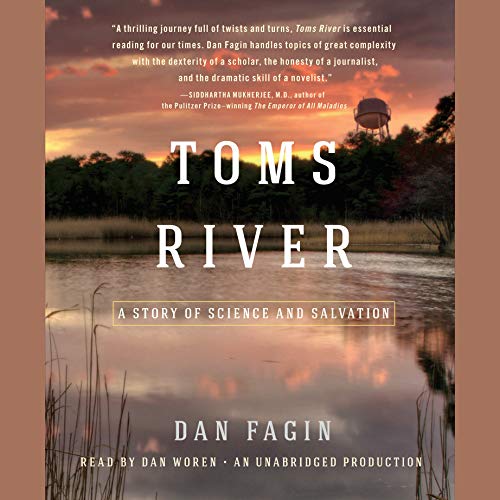 The riveting true story of a small town ravaged by industrial pollution, Toms River melds hard-hitting investigative reporting, a fascinating scientific detective story, and an unforgettable cast of characters into a sweeping narrative in the tradition of A Civil Action, The Emperor of All Maladies, and The Immortal Life of Henrietta Lacks.

One of New Jersey’s seemingly innumerable quiet seaside towns, Toms River became the unlikely setting for a decades-long drama that culminated in 2001 with one of the largest legal settlements in the annals of toxic dumping. A town that would rather have been known for its Little League World Series champions ended up making history for an entirely different reason: a notorious cluster of childhood cancers scientifically linked to local air and water pollution. For years, large chemical companies had been using Toms River as their private dumping ground, burying tens of thousands of leaky drums in open pits and discharging billions of gallons of acid-laced wastewater into the town’s namesake river.

In an astonishing feat of investigative reporting, prize-winning journalist Dan Fagin recounts the 60-year saga of rampant pollution and inadequate oversight that made Toms River a cautionary example for fast-growing industrial towns from South Jersey to South China. He tells the stories of the pioneering scientists and physicians who first identified pollutants as a cause of cancer, and brings to life the everyday heroes in Toms River who struggled for justice: a young boy whose cherubic smile belied the fast-growing tumors that had decimated his body from birth; a nurse who fought to bring the alarming incidence of childhood cancers to the attention of authorities who didn’t want to listen; and a mother whose love for her stricken child transformed her into a tenacious advocate for change.

A gripping human drama rooted in a centuries-old scientific quest, Toms River is a tale of dumpers at midnight and deceptions in broad daylight, of corporate avarice and government neglect, and of a few brave individuals who refused to keep silent until the truth was exposed.

"Fascinating...a gripping environmental thriller." ( Kirkus Reviews)
"At once intimate and objective, Toms River is the heartbreaking account of one town's struggle with a legacy of toxic pollution. Dan Fagin has written a powerful and important book.” (Elizabeth Kolbert, author of Field Notes from a Catastrophe)

What listeners say about Toms River

Amazing story of grit and unrelenting drive by some of the town's residents put an end to the slow poison administered by Ceiba geigy (Novartis) and union carbide (Dow chemicals) to the town over 4 decades through their extremely toxic waste generated by their ambitious synthetic dye manufacturing. At the end, town's claims did not get vindicated in the courts as cancer causation could not be proved clearly enough. Tedious at times just as the saga had been to the town perhaps. Meanwhile, corporate greed and apathy continue to rule as they move their poison machine to developing countries..

I have lived in Toms River twice – first while in high school, from 1984-1989, and it is my current residence since 2000. When my family originally moved to New Jersey in 1984, we lived not too far from where the first break in the Ciba-Giegy pipeline occurred. The story Fagin tells is the background story of my high school and college years. Many of the players he mentioned are real people to me - Bill McVeigh was my history teacher in high school and the ex-navy seal who owned a dive shop in town whose advice was sought after by the Greenpeace disrupters was the father of one of my brother's closest high school buddies. While doing some student teaching in a Toms River elementary school located in the core zone, there was a young girl in that class 6th grade class with leukemia – we knew people in town who had young kids with cancer. The book doesn't say, but Bill McVeigh, the Toms River High School East history teacher who lived on Cardinal Drive (which backed up to Ciba-Giegy’s property) also died prematurely from cancer a few years ago, at far too young an age.
As a resident of this town, Fagin’s book rings resoundingly and disturbingly true to me and my memory of the events as they unfolded. Small town politics mixed with corporate greed and people who knew if they lost that job at Ciba that there wasn't much else in town with a comparable earning potential made for a perfect storm – just the right combination for good people to look the other way or stop asking hard questions. Ciba was the big bad wolf, but more disturbing to me, actually, was the Riech Farm site, which I don't recall getting the same press and which caused far more pollution and contamination for a considerably longer period of time, with absolutely no regulation. That Furnicola never paid a dime of the $40/day he told the Reich’s he’d pay them to allow him to store the waste drums on their property is par for the sad and disturbing course of the story. Definitely not the kind of thing one wants the hometown to be famous for.
That research is so cumbersome and so expensive to conduct on cluster cancers (and I suspect a potential link to an area Austism cluster as well), is beyond frustrating to me as a community member. The truth is out there, and it’s always complex. Always. Too expensive or too cumbersome is a b.s. excuse to keep turning a blind eye, and not looking at the NUMEROUS locations where similar events have occurred, because, it’s just too hard and too expensive to prove, and the corporations have way deeper pockets to obfuscate than the general public does.
I would recommend this to anyone who lives in Toms River, or in an area where you suspect disease due to industrial waste teratogens. Fagin’s research is excellent and his attention to detail was well appreciated by me. He discusses complex medical and statistical issues, but does so in a way that makes them understandable and relatable. The story of how the offending chemicals were discussed, how their production evolved, and why they were so in demand, along with the historical exploration of how we’ve come to our current understanding of how cancer occurs, were also very well done.

Would you listen to Toms River again? Why?

No, I feel like I got everything I needed out of the story in one shot.

I loved to hear the very researched and interesting story of what CIBA-GEIGY did to Toms River, NJ - I was on the edge of my seat for the first half of the book

What does Dan Woren bring to the story that you wouldn’t experience if you just read the book?

I wouldn't have had the time to read it. However on my hour and a half drive to and from work, it was perfect to listen to.

Yes, but it would need to be seriously edited for that to happen.

I really loved the beginning of this book, and have recommended it to everyone I know... That being said, I decided to stop listening to it midway thru... It didn't need to be as long as it was - There was a lot of information repeated over and over with slight differences, and I just didn't want to hear them again. Now, I LOVED to hear the accounts the first time tho, so I do recommend the book... I just wish it was at least half the length it was...

A really great science book with a engaging background story. This books tells how a small town suffered of ambiental pollution while recounting the emergence of the modern industry chemical giants, the development of cancer epidemiology, environmental pollution and much more. The "scientific intermissions" among the story are very well explained and really contribute to the comprehension of how the public understanding of environment pollution, economic development and health came to change from the 1950's to modern times.

I was surprised with the quality and description of science intermingled with the town story. It is a dense and long listening, full of names, chemistry and dates, but told and read in such a competent way that it is easy to follow. The author has picked the perfect time period and health drama to tell the development of the discovery of the link between cancer, environment and epidemiology. I see this book as a half way between The Imortal Life of Henrietta Lacks–with more science and a less personal touch on the human story–and The Emperor of All Maladies–with less about cancer, more about the comprehension of the environmental factors associated to its emergence and a more engaging human side.

Wow, how did I miss Toms River?

I thought this was a fascinating and well-written book. I never found it boring. Of course I have been in the environmental, health and safety business for over 30 years, so it is right in my main area of interest. Somehow, during that period, I missed all the Toms River press, I really liked the way he brought in the science in an easy to understand fashion, especially the epidemiology discussion..

A Story of Science and Salvation that got boring

What was most disappointing about Dan Fagin’s story?

This book started strong and was very compelling. The last third of it was beyond tedious to the extent that it diluted the message.

"Tom's River" has left me speech.

I know people from Tom's River. I've never heard about it's legacy, what a story. Every concerned American should read this book.

A fascinating account of one towns struggle to connect a rash of childhood cancers with the local chemical plant and its waste effluents. Interspersed with the history of cancer cluster study and epidemiology, specifically environmental, Toms River is a compelling story even for those without a scientific background.

When I was a little girl we drove through the town of Tom's River nearly every summer Saturday on our way to go crabbing at Island Heights. Adulthood had me moving around the country and I lost touch with the town, the one with the charming name. And then I found this book. Not only do we get a great telling of the story, an understanding of a most interesting legal process, a sense of the pain of aftermath, and finally we are left with the question, what if anything can society reasonably do. For those readers who might be interested, I would happily host a blog to revel in a full fledged discussion of the book's many angles. To Dan Fagin, thanks for a fantastic experience.

An excellently executed well rounded true story which you wish was fiction. I'm sure this is the tip of the iceberg that we have already hit but we are too busy feasting and dancing on deck to notice. So well done and presented but a long and arduous story to endure....a must read though

Even though this fine piece of environmental journalism is a horror story, I didn't shrink from it. Events and eras unfold in a compelling way.