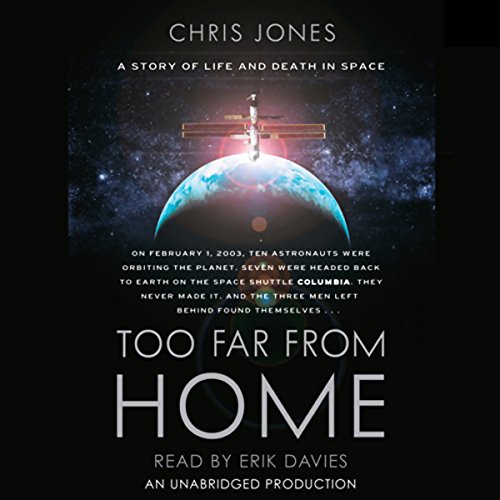 Too Far From Home

Here is an incredible, true-life adventure set on the most dangerous frontier of all: outer space.

For a special breed of individual, the call of space is worth the risk it entails: men such as U.S. astronauts Donald Pettit and Kenneth Bowersox, and Russian flight engineer Nikolai Budarin, who in November 2002 left on what was to be a routine 14-week mission to maintain the International Space Station.

But then, on February 1, 2003, the Columbia exploded beneath them. With the launch program suspended indefinitely, these astronauts had suddenly lost their ride home.

Too Far from Home chronicles the efforts of the beleaguered Mission Controls in Houston and Moscow as they work frantically against the clock to bring their men safely back to Earth. Chris Jones writes beautifully of the majesty and mystique of space travel, while reminding us all of how perilous it is to soar beyond the sky.

"[Jones'] story combines gripping narrative and strongly defined characters....Jones' reporting is filled with details of life aboard the space station...That sort of frank talk enhances readers' identification with the astronauts, making their drama all the more engrossing." (Publishers Weekly)

Would you listen to Too Far From Home again? Why?

This book was interesting on many different levels. Loved the characters, loved the descriptions and especially love the way in which the book is written.

What does Erik Davies bring to the story that you wouldn’t experience if you had only read the book?

The narrator of this book really brings out the mystery and exciting narrative within this story. i really felt as if I could imagine the ISS and the feelings of the astronauts, also brought out extremely well in Erik Davies's narration.

I really felt the tension building within this story and did feel genuinely nervous in parts. That is the beauty of this book.

I would recccommend this book to anybody who loves a good real-life space adventure with plenty of suspense and also plenty of rich detail. loved it.