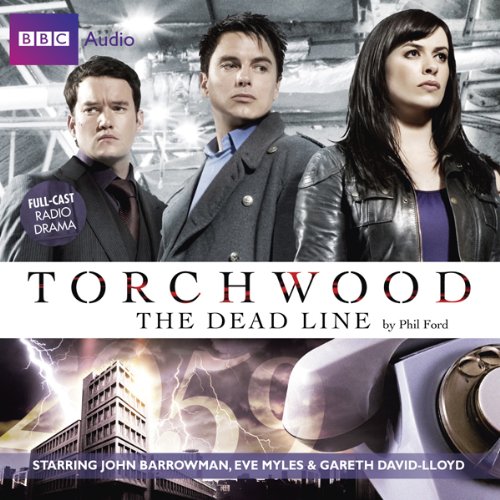 When a Cardiff hospital is inundated with patients that have fallen into coma-like trances, Torchwood move in to investigate. They find that the trances were triggered by phone calls, all of which were made from a number that hadn't been active for over 30 years. Determined to find out who's been calling the unfortunate victims, Jack rings the mysterious number - two, zero, five, nine - nothing. It's a dead line. Until it calls Jack back, he answers - and falls into a deep trance...

With the help of one of Jack's old girlfriends, eminent neuroscientist Stella Courtney, the team has to race against time to find the source of the 'infection' and save the patients...

What listeners say about Torchwood: The Dead Line

I absolutely love that this was a dramatization with the actual actors who play these roles narrating this audiobood. You could completely believe this was a missing episode. The dynamic between the actors in their roles was just as present audibly as it is visually on the TV screen.

This story is just as enthralling as any Torchwood episode the BBC aired. I didn't want to hit pause once on this story.

If you are a Janto fan... you do not want to miss this. If you just love the series pre-Exit Wounds, then you'll love this story as well. For Torchwood fans, this is well worth the time and money/credit spent.

Honestly, at times I wasn't sure if I was listening to an audiobook or the TV show. Incredibly well written and superbly dramatized by the original cast (always a pleasure). Sound effects and superb writing, not to mention voice acting, make it easy to picture the action almost as clearly as seeing it on screen. Highly recommended for all Torchwood fans - though some familiarity with the characters and basic premise of the show is necessary, as not a lot of time is spent explaining things.

An exciting and surprisingly moving entry

Jack, Gwen, and Ianto set out to find out why people are dropping into deep coma-like trances after answering a call from a phone number that was last used in the 1970s. The story is surprisingly active, features some nicer interactions between Gwen and Rhys and a surprisingly moving monologue from Ianto regarding Jack that makes certain events in Children of Earth that much more tragic. Would recommend this to any fan of Torchwood but especially those that are more familiar with the hub and especially the events of Season 2 as otherwise the casual listener may spend some time playing catch up regarding some relationships. The cast per usual performs superbly in all regards. Gareth David-Lloyd is particular good.

One of my favorites

I listen to this one over and over - the script is awesome, and the acting was, of course, perfect

I loved the narration. I thought it was a great touch hearing the story performed by the actors.

I just wasn't feeling this story. It was interesting, but it had no substance. To me it seemed like nothing really happened.

What made the experience of listening to Torchwood: The Dead Line the most enjoyable?

We always knew how Ianto felt about Jack, but not always how Jack felt about Ianto. It was beautiful to find that out at the end. But Ianto's pain at seeing Jack in a trance-like state was unbearable.

The fact that the "virus" was transmitted through telephones, especially when everyone lives on their phones all day long, was frightening. And, adding that it was a type of "virus" also connected to the use of computer software in today's world. This type of thing could really happen. Hummmmm. Very interesting.

The voices of the Torchwood team make it almost viewable. You can almost experience them on the screen in front of you even though it's only audible. Inflections in the voice translate into drama that you can feel. Sometimes novels cannot portray that much emotion.

The part where Ianto opens up and tells Jack how he really feels and the possibility of loosing him one day was heartbreaking. But Ianto tells Jack believing that Jack can't hear him. These two don't talk to each other much or not much about their relationship at any rate.

Can't believe I'm talking about love between two men, but it is portrayed so beautifully that your heart aches for them. Maybe one day we'll be able to put aside the stigma's of homosexuality and just call it what it is - love between two people.

The way that Gwen orders Reese around is interesting, but Reese isn't just a follower, he helps Gwen along the way - two very important pieces to a good marriage, even though you belong to a secret organization trying to save the world in the 21st Century.

Gwen and Reese have had many ups and downs throughout the Torchwood series but it's nice to know that after all this time, they are still very much together.

Did an audio book actually make me tear up? Yes it did! This felt just like an episode and I loved it.

Even though Jack was not in most of the story you learn about Jack and Ianto's love toward each other. The main story was interesting. Loved it.

I downloaded this for a quick Torchwood fix and was not disappointed! It used the same music and actors in the television series and it's the length of one episode-45 minutes long. Classic Jack Harkness all the way!

Good story with most of the cast. story was weĺl written and worth a listen.