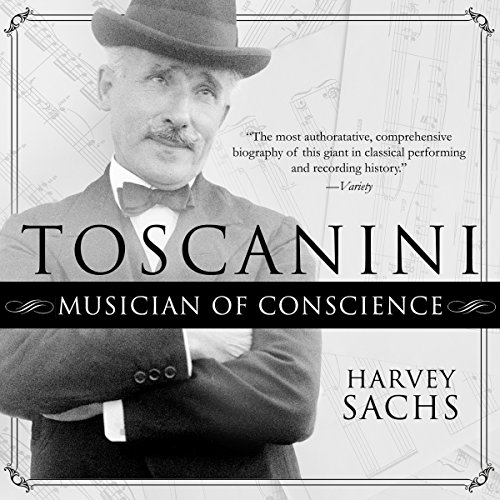 During a 68-year career, conductor Arturo Toscanini (1867-1957) was famed for his fierce dedication, photographic memory, explosive temper, and impassioned performances. At various times he dominated La Scala, the Metropolitan Opera, the New York Philharmonic, the NBC Symphony, and the Bayreuth, Salzburg, and Lucerne festivals. His reforms influenced generations of musicians, and his opposition to Nazism and fascism made him a model for artists of conscience.

Thanks to unprecedented access to the conductor's archives, Harvey Sachs has written a completely new biography that positions Toscanini's epic musical career and sometimes scandalous life against the roiling currents of history. Set in his native Italy, across Europe and the Americas, and in 1930s Palestine, Toscanini soars in its exploration of genius, music, and moral courage, taking its place among the greatest music biographies of our time.

A great biography of a great cultural icon

Toscanini's was a grand, important, fascinating life, worthy of no less the conscientiousnes he brought to his art in its telling. Sachs has so done in bringing to bear his many years of meticulous research, and now also the treasure of T's correspondence and secretly recorded episodes of his home life, in his ultimate Toscanini biography.
The book could have been reduced by at least 150 pages and ten hours had Sachs not insisted on citing every composition and every soloist of so many of T's concerts within the text.
The narration is excellent except for Paul Boehmer's annoying pregnant pauses before obsessively wrapping his lips around every foreign name and word.

Great book; unable to finish due to technical issu

I thoroughly enjoyed the book right up to the point about 3/4 way through the audio when there was a technical problem such that I was unable to finish the book. Apparently, there is an issue with the recording itself. Note: I had never before nor have I since experienced an issue with Audible audiobooks. I contacted Audible, but the issue was never resolved as far as I know.