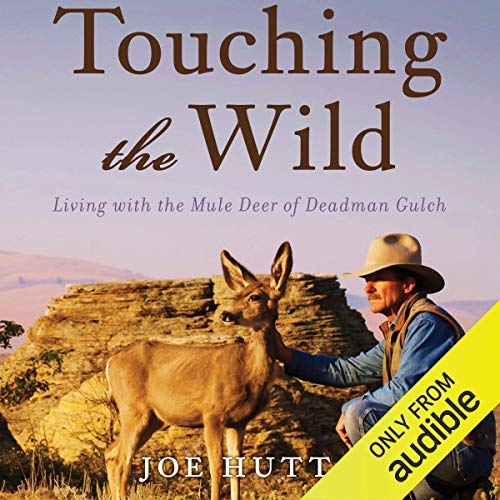 Emmy Award - winning filmmaker, writer, and naturalist Joe Hutto has done it again. Touching the Wild is the enchanting story about one man who has lived with a herd of mule deer in the Wind River mountains of Wyoming for almost seven years. Why, you may ask, would a person choose to do such a thing? His response: how could you not? For Joe Hutto, close proximity to wild things is irresistible. In Illumination in the Flatwoods he unveiled the secret lives of the wild turkey to great critical acclaim. In Touching the Wild he turns his acute sense of wonder and affinity to one of the West's quintessential "big game" animals: the mule deer, a species in peril due to environmental factors.

Wily, thoughtful creatures, mule deer are not inclined to make foolish friendships with their primary predator - man. But due to the intense curiosity of one small doe, and the resulting introduction to an entire herd, Joe Hutto has been allowed unprecedented access and insight into the minds and behavior of this special animal. Spending every day among the herd, he develops uncanny connections with the deer, learning individual and group dynamics as well, unveiling just how much we have in common with these delicate beings. Each season brings new joy as fawns are born and heartache as matriarchs pass away, or hunting takes its toll, or a fawn is orphaned. But what overwhelmingly emerges from Touching the Wild is the enormous respect Hutto has for all wild things and the recognition that we have so much to learn from them about their world, ourselves, and the fragile planet we share.

The Wild Turned Into Words

I absolutely loved this book and have already listened twice. Hutto captures concepts of a life lived in the wilderness and encounters and deep connections made with wild creatures with such perfection I was left speechless. My personal experience of imprinting, raising and ultimately coming to know and love several generations of geese was echoed beautifully in the writing.

To me, this is nature writing at its best. The narration was excellent, the story captivating. Recommended for anyone interested in exploring a world, immersed in the elements, where humans, birds and animals are fully themselves and deeply connected. Wonderful.

A masterpiece of its kind. Beautifully written, heart-rending story of a species I didn't know existed - now, I am deeply worried it may disappear. You will make friends with many characters in this story. The fact that they have 4 legs is really totally irrelevant! Thank you Joe Hutto for this wonderful gift!

3/4 of the listen was excellent!

What an amazing story....until author got self righteous and very condescending. His bias was way to much for me. 👎🏼