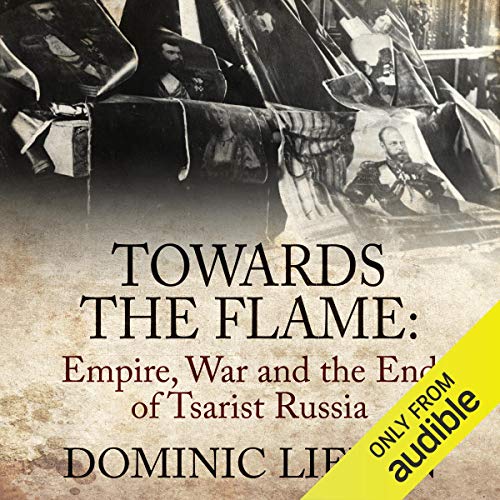 The Russian decision to mobilize in July 1914 may have been the single most catastrophic choice of the modern era. Some articulate, thoughtful figures around the tsar understood Russia's fragility, yet they were shouted down by those who were convinced that despite Germany's patent military superiority, Russian greatness required decisive action.

Russia's rulers thought they were acting to secure their future, but in fact - after millions of deaths and two revolutions - they were consigning their entire class to death or exile and their country to a uniquely terrible generations-long experiment under a very different regime.

You must listen to the final chapter

Would you listen to Towards the Flame again? Why?

There is so much detail that you have to revisit many chapters to ensure you have a grasp of the narrative that is unfolding.

I cannot recommend too highly this book to anyone with an interest in 20th century world history. Having read several books dealing with the events leading to the outbreak of the 1st world war, I was engrossed by the presentaltion from a Russian perspective.Half way through I had to break off to revisit Misha Gennie's excellent Balkan history to refresh myself on Balkan politics 1900-1914.
I hope all politicians read the author's final chapter, which is thought provoking and certainly puts the current Ukraine crisis into a broader historical context.

Really terrific, but not a primer for this subject

I loved this book. It's clever, articulate and hugely informative, and it's beautifully narrated by the experienced and highly skilled Sean Barrett. I found the detailed analysis of the period very stimulating and not at all intimidating in its depth and breadth, but while not describing myself as an expert on the period, I did have a fairly good grounding in the main events of the time. My one caveat would be that it's probably not the best introductory book for this area of interest, but if you do have a rough grounding in its themes it will be a most rewarding listen.

The central thesis of this book is that it is impossible to understand the World War 1 without grasping the importance of the struggle between Austrian and Russia for hegemony in the Balkans, and most importantly Ukraine. Whilst he is successful in this respect he also manages to explore the wider causes and consequences of the war. History at its best, measured, cool headed, and dispassionate, though not devoid of serious moral judgements. Exceptionally good narration, striking exactly the right tone.

WW1 is an Eastern European War

Sometimes in life you come across a piece of writing which reshapes your thinking on a subject, challenges your presuppositions, and simply overwhelms you with the detail of the narrative to the point where is becomes deeply persuasive. This is such a book. An utterly fascinating account of Tsarist Russian foreign policy, and some of the issues which left that nation helplessly spiralling to war. Professor Lieven will provide layers of detailed research, foreign policy dichotomies, and missed opportunities, which will explain why the events of 28th June 1914 could have only one sad conclusion. A brilliant book, that is undoubtedly challenging, but nothing worthwhile was ever achieved without effort.

My only criticism is that the narrator has only a little expression in his voice, and is so deep and resonating that it almost puts me to sleep. Still that probably says more about me than I wish to reveal.

This isn't popular history and it doesn't dumb down the subject for people like me who are listening at the gym. So I did occasionally struggle to keep up and do my fourth set

This book is, though, very well written. it's clear and free of jargon

the performance is excellent: just the right balance of dispassionate but interested. His pronunciation of proper names in multiple languages is admirable

I enjoyed it and learned a lot that I hadn't known. It made me revaluate what I thought I did know about why Russia entered the Great War

A more perfect audio book I could not imagine.

Wonderfully narrated. mainly diplomatic history of Europe and particularly Russia in the decade or two leading up to ww1.

Enlighting read on more recent history of Russia wirh focus or from the point of view of the first world war and what led to it.

An analysis that not only reveals the complexity of pre-WWI era, but also provides striking insights for the unsustainability of modern Russia.

Well written, interesting, intelligent and well researched position. An important and often neglected perspective on the origin of the First World War. Strongly recommend to everyone interested in the subject.

Would you try another book written by Dominic Lieven or narrated by Sean Barrett?

Not until the author learns the difference between Britain and England

If you’ve listened to books by Dominic Lieven before, how does this one compare?

Have you listened to any of Sean Barrett’s other performances? How does this one compare?

As good as ever, voice is so important for audiobooks and Sean has that gift. He also shows a good ability to handle names from a range of places. The book can seem a bit flat and droney at times, but I think that's more to do with the writing than with the reading.

What character would you cut from Towards the Flame?

There's a lot of interesting and enlightening stuff in here, but I gave it one star because the author continually refers to Britain as 'England'. Seriously..if the bloke has such a vague grasp of the country he comes from, how are we supposed to have any faith in his assessment of complex and convoluted international events?

The reason I liked this book so much was the fact that it focused on something other than the western front. Don't get me wrong, I love "Guns of August", but it is fantastic to hear a well written book about something that I previously knew nothing about.