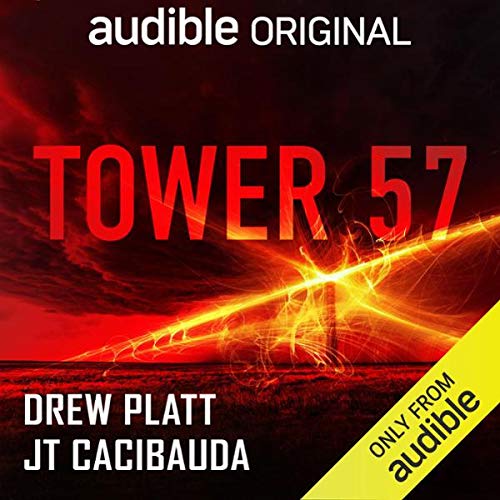 If you drive past the lights of downtown Roswell, north on Route 285 into the darkness of the New Mexico desert, you'll run across a little radio station with a single tower. This is the home of WKLEN talk-radio, broadcast through Tower #57.

Fresh out of the local community college and eager to start his career in radio production, Luther Stenson arrives for his first shift as an intern on Evening Sands, a late-night radio show focused on the unexplainable and broadcast throughout the lower forty-eight.

Luther’s first night in radio quickly becomes one he’ll never forget, when a mysterious caller known only as "Magnolia" begins to interfere with the station’s broadcast. As the night progresses, Luther and the station crew are pushed to their psychological and emotional limits as they uncover a life-threatening secret and deal with forces beyond their control. The desert is lonely at night...

In the city known for attracting millions to the uncanny, tonight the uncanny is attracted to the only light in the desert... The blinking red crown of Tower 57.

What listeners say about Tower 57

loved the plot which makes a real edge of the seat thriller but probably sketched the ending by explaining how they got through .

The story was short yet engaging. The cast did an amazing job for the characters. Overall the performance was good but some things could have been explained more to give depth and vibe to the story.

a fantastic story but the last chapter was not tied up properly (plot holes, senselessness)

Definitely worth a listen

As a short story I was gripped I don’t normally listen To this sort of book and I hope more of this kind I loved the story full Mark’s to the cast and it was free I would have gladly used a credit on it.

I am absolutely hooked on this, it has a twilight zone like radio drama feel to it with solid voice acting.

I was quickly hooked and curious about the outcome through the unfolding story lines. There were many twists and turns leading to the gripping climax and unexpected end. Well done Audible team and Mike Charsick.

This mostly played out like a B grade radio drama. However, the third episode- the night in the desert - was like something else entirely- genuinely terrifying in parts. The skinwalker should have played a bigger part throughout, as the next episodes were quite weak by comparison. It was free and, overall, worth listening to.

*no spoilers* This story begins like any old life-novel but quickly captures the reader with a supernatural mystery that uses real life events from the 20th century and intertwines them into a compelling story. The mystery keeps one entertained to the end.

I do not like being forced to submit a review before I have finished the performance as this has done.

Great story well read, left me wanting more, wish it was longer , I will listen again

Good short story ,narration was good with being a full cast makes it that more interesting when your imagination takes over . all in all good book and I think more books should be narrated with a cast although some lone narrators are great at what they do.

Interesting, exciting story. Slow start, but accelerated very well. Listened to it in one sitting.

What and amazing story and performance, can't wait to try more. The story was riveting, couldn't stop listening. And the performance and overall sound experience with music and sound effects was truly amazing, you could do really picture all the scenes.

I enjoyed listening to this story. I wasn't sure where it was going at the start but I soon got into it. It's worth a listen and...It's free so that makes it even more worthwhile.

Enjoyed this so much, listened in one sitting. Characters were well played & very believable. Give it a try, I’m sure you’ll love it too.

This was a fantastic listen and just kept me riveted. A bit scary at times but so well written and performed.

first time for one of these audio movie style books,was awesome, story was solid voice acting was great also for a free👌

OMG, what a ride, I loved it. really makes you think what they are doing, or who THEY are.

I love a good conspiracy story. This one was wellell acted and had a story that kept you interested till the end. Would have made a good episode of the X files or Twilight Zone.

I enjoyed listening to this audio play, which was well-acted and had moments of high suspense.