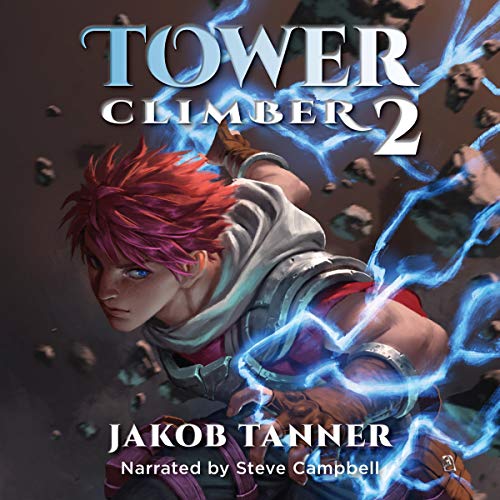 Climber academy was only the beginning....

Now an official tower climber, Max is thrust into the competitive and deadly world of the tower.

While taking on dangerous missions and defending the city against powerful monster-waves, Max must train and uncover the truth about his past.

With new information on his lost sister’s whereabouts, the stakes to ascend the mysterious tower couldn’t be greater.

But warring clans and an evil organization of rogue climbers stand in the way of Max’s goals.

Will Max be able to gain enough power to break through those who wish to stop him?

Tower Climber 2 is the continuation of the best-selling LitRPG/Progression Fantasy series by Jakob Tanner, author of Arcane Kingdom Online. The story contains RPG mechanics, stats, and ranks as a form of power progression.

Pick it up today!

What listeners say about Tower Climber 2

And it's said sequels are never as good as the 1st.. well NOT in this case! great story progression, character development a truly great continuation of the story. Practically the only things I can say in the negative is this.. IT ENDED AND I DIDNT HAVE A 3RD BOOK TO JUMP TO IMMEDIATELY!
Great work Jakob!

max amd Casey are back in this sequel... I couldn't be happier with this series to be honest. I love intelligent main character's and this one doesn't have an achimg back with lackluster side kicks. casey has some great shining moments and so doesn't the books series mascot.

it has great flow with twists and details you forgot about until the right moments. I cant wait for the third installme t!

I did receive a free code for an honest review and if I didnt I would of purchased this in a beat.

Fun story. Great narration, as always. Inventive use of Abilities. I found myself urging Max to use his powers in specific ways, and he did!

Overall, this was a great sequel to the first book with a better balance between tower-climbing elements and story development. I can't wait for the next book!

wow.
not very often does a sequel surpass the original, but man did you ever exceed all expectations. this book had me on my toes from start to finish and like always, steve did such an amazing job bringing all of the characters to life. 10/10
I have no idea how you plan on following this up but I am waiting with eager expectation.

Great book from start to finish

This book was amazing it built on what was great about the first and has improved fixed the very few shortcomings that the first book had. the narration was excellent. can't wait for the next book in the series.

second only to towers of heaven

i love this series and this book did not disappoint, it's everything I hoped for and more...
more skills, more floors, more monsters and more levels gained!

Steve is so good at narrating that I sometimes forget that he is the only narrator on this book, the voices are that good

I liked how the story started. It was very intriguing and made me curious on how that incident would play out.

As story went on, unfortunately, it gave me this sort of "filler-episode" vibe and Violet's character threw me off for a bit, I still had fun reading it, though. The adventures/missions that Max and Casey did were all exciting on each floor. It's really cool to see how they were able to enhanced their abilities and ranked up. The 2 battles at the end were pretty awesome!

Steve Campbell's narration seriously helped me finished the book. As always, I was very impressed on how he voiced the different races and monsters from each floor. I thought he did a fantastic job with U'lop!

To stop a civil war

Max and Casey are given a new assignment. They need to get to floor 10 and find out what is going on with the neighboring civilization. The problem is that neither of them have been above the Endless Forest. They pick up a mission to escort a merchant up to floor 10.

Still a great story! Both Max and Casey are really growing into their powers and being more confident. Steve Campbell does a fantastic job with the narration. I really enjoyed this series and am starting book 3 now!

This series is awesome, can't wait for book 3 to come out. awesome narrator as well.

Easy to listen to, I wish book 3 was on audible already, some combat seemed to end abruptly but still a great book, I will definitely read or listen to book 3

wow, absolutely loved this book. so much feeling packed into a medium sized book. it honestly got better and better with every word and to top it off, the author picked a great narator to perform this outstanding tale. cant wait for book 3

Absolutely loved it, continues on nicely from the first. For me it’s just the right amount of action and enough detail to visualise a lot. Really invested in following this series ! Can’t wait till book three hits audible ! Narrator is brilliant and does really bring the different characters alive, can clearly hear the difference between characters

Tanner keeps delivering exciting GameLit with his own unique style of a blend between Western and Eastern story telling. He keeps a low amount of gore, profanities and romance without losing character depth or excitement.