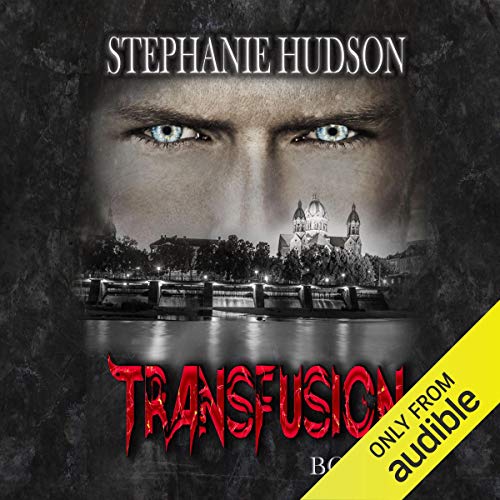 It’s been seven years. Seven long years since that cold and cruel Vampire King, Lucius, broke her heart. Her naive little heart destroyed after one painful night when she sneaked in to his Gothic nightclub, Transfusion. Seven years since he humiliated her, casting her aside and telling her just what he thought about her little obsession with him. Then he saved her life.

Well, now he is back, and this time he is out for blood, and all she can hope for is that it isn’t hers that’s on the menu. Because she is just your typical, ordinary, everyday girl who works and lives in London. Even if she is trying to make it on her own without the safety of her family. However, growing up knowing of the supernatural world and being human definitely has its drawbacks. Especially when a certain Vampire King has her in mind for a date and his dominant and forceful ways are sending her reignited obsession with him into overdrive.

What listeners say about Transfusion

I really struggled with this book. I'm not sure if it was the narrator or that the story was just not that engaging. All I know is I kept falling asleep and had to rewind several times before I finally finished.

This story was horrible!!! The Afterlife Saga was wonderful this book was so weak!!! A silly girl giving up all she had to b what independent??? Going over and over and over again how she wanted a man that wanted her mother what!! Y !!! She could have been strong like the man she was chasing... I was highly disappointed!! Please Ms Stephanie Hudson take a break and get a good story!!! Besides the word Fuck and shit it was completely childish!!! I waited for this story to go into my paranormal library which is close to 600 books. I'm done with this series. This is the worse ever,!!!

I’m so disappointed. The Afterlife Saga was amazing. So many rich characters. Now we have this book that is beyond childish and boring. I can’t understand what actually happened to the author and her ability to write such immense stories. This author is one of those authors who can usually tell one heck of a story; however, this book fell way short. Lastly, the narrator is not right for this series. Especially when reading for such rich characters as Pip! I will try to finish this but no promises

For nearly all the book Kelly did pretty good, until she destroyed Pip completely!!!! DESTROYED!!!!! How could Kelly of not done any research into the franchise and learn the characters???? Rebecca Rainsford may have set the bar high but definitely not unreachable! Kelly didn't even try! Pip is immortal, so why the hell did Kelly portray her as ancient? I can only think of 1 reason. zero effort in learning the characters. you'd think with nearly a dozen books available for reference she couldn't screw up Pip completely. It's possible Kelly isn't to blame but just the scapegoat, which if true I apologize for my berating. sigh.....what an insult to our beloved author who has spent years developing Pip. Kelly, please don't record Pip if your just gonna insult her fans and her creator.

Okay, I did not know about the series that preceded this first book about Amelia and Lucas. I like the start of unrequited love and longing for the Vampire King and personal and professional success as a human for Amelia. She has persevered and is unwittingly by her father brought literally kicking and screaming into the supernatural world. Looking forward to the next in the series.

Good story and well written but way to much internal dialogue, that at times makes the book drag. Plus, there is no sex or real romance in the first book. I think book 1 and 2 could have been combined, removing unnecessary details. I really like the plot and characters so I still recommend this book as long as you set the aduat 1.3 speed

Great story, Great narrtion although it would have been nice if there was a male narrator for the male characters. Cliffhanger needing which means I can't wait for the next book. Hope these two end things with a new at the end of the series. Highly recommended.

the hot sexy vampire king. I loved this book. I absolutely adored it. Is it slow going but it was good in the end

This book was hard to rate

I couldn’t decide what to rate this book. The narrator was great as always. I love the meat of the story, it’s great, It’s fun and dark and captivating. I will listen to book two because I’m kinda loving our very bad boy hero.

For my taste Amelia is a “princess” and not the smartest of one. She runs away because she doesn’t get what she wants. She was raised in a bubble and is not wise in worldly things. Plus she needs to learn to let things go, just my opinion. But none of this hurts the story too much so give it a try.

So I haven’t even been able to make it through the second book of the first series. Those books were filled with long chapters of useless information. This book is a spin off of the Afterlife series and is sooo much better. The narrator is very good and the book itself is just all around better. The storyline is good and it doesn’t seem to run on and on with needless information.

I was really looking forward to a further story about the vampire king, but found it to be a 12 hours of a wittering female and her sexual fantasies. With phrases from shades of gray being used. Please Stephanie use your own imagination. If book 2 is also inane she will lose her readers.

female characters are not strong, too much whimpering over love, your heart is broken but easily eager to forgive and forget

I’d like to start off by saying that this was good to an extent. SPOILERS

The main character Amelia spends way too much time thinking about her feelings and telling us about this guys eyes and physical appearance even in the most annoying of times, for example during an ‘action’ scene so much so it messes with the flow of the chapter. She puts so much focus on the past and little on the present. She tries to come off strong but is in fact weak and whiny, having never lost her princess status. All throughout the book she cannot control herself around this man at all. Then towards the end she concocts this plan to sneak away, suggesting a hidden strength only to become weak and pathetic a chapter later. I found Amelia to be incredibly frustrating at times.

Second point is that is is unnecessary for this to be two books let alone three. Cut out some of the useless repetitive emotion stuff and this whole series could have been one 10 hour audiobook easily. That being said I will not be purchasing the second the book or the third. I did listen to this in one day, increasing the speed at points I found particularly boring.

The narration and story telling was excellent and the plot and aim/objective of the book is great. I just feel it was too long and sometimes boring listening to the emotion segments.

I would recommend this if you like the helpless female, emotion controlled types with little action.

I love all Stephanie Hudson books. This one didn’t disappoint and the narrator is so much better than the person they used to narrate the Afterlife series. It’s lovely having a continuation of the Afterlife world but following a different thread. Lucius was always one of my favourite characters. The story is excellent and well written. I prefer it when there’s more story than just relying on sex scenes. I get sick of too much sex in all books and tend to skip past those parts. I hope the next book continues in a similar vein.

the only critical point i have is that its a shame a male voice couldn't read the part of Lucius. The voice needs to be masculine, it did jar somewhat in an otherwise good performance.

Loved it! The femail lead I love and the male too. I loved the chemistry and sexual tensions between them. So much depth to this saga. I have already red the books out. And really wanted to listen too. Absolutely fantastic and well written.

Thrilling !!! What an amazing book .. storyline is fantastic.. fallen in love with the characters ..Kelly Burke did a great job. Stephanie Hudson u have done it again!! .. I crave more !!! Can’t wait for the next audible x

Loved the book and the narrator also, but I wished she'd done her homework about the other characters ahead of reading this book. To have Pip have a grandmothers voice was ridiculous. Please future narrators even if you haven't read previous books at least research them. It could help!