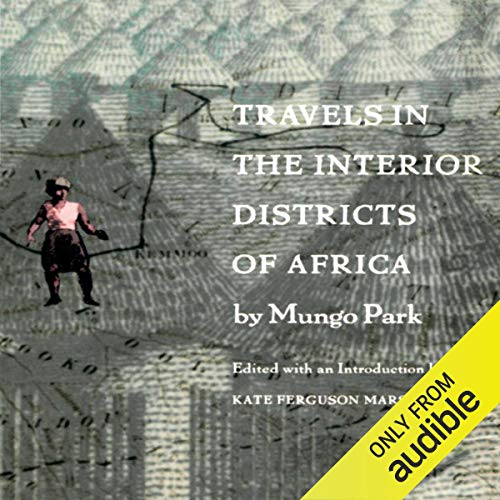 Travels in the Interior Districts of Africa

Mungo Park’s Travels in the Interior Districts of Africa has long been regarded as a classic of African travel literature. In fulfilling his mission to find the Niger River and in documenting its potential as an inland waterway for trade, Park was significant in opening Africa to European economic interests. His modest, low-key heroism made it possible for the British public to imagine themselves as a welcomed force in Africa. As a tale of adventure and survival, it has inspired the imaginations of audiences since its first publication in 1799 and writers from Wordsworth and Melville to Conrad, Hemingway, and T. Coreghessan Boyle have acknowledged the influence of Park’s narrative on their work.

Unlike the large expeditions that followed him, Park traveled only with native guides or alone. Without much of an idea of where he was going, he relied entirely on local people for food, shelter, and directions throughout his eventful 18-month journey. While his warm reaction to the people he met made him famous as a sentimental traveler, his chronicle also provides a rare written record of the lives of ordinary people in West Africa before European intervention. His accounts of war, politics, and the spread of Islam, as well as his constant confrontations with slavery as practiced in 18th-century West Africa, are as valuable today as they were in 1799.

Park’s narrative serves as a crucial text in relation to scholarship on the history of slavery, colonial enterprise, and 19th-century imperialism. The availability of this full edition will give a new generation of listeners access to a travel narrative that has inspired others over two centuries and will enliven scholarly discussion in many fields.

A Stranger Alone in a Strange Land

Audible had a tall order for this narrator: A Scotsman who can realistically inhabit the mind of a an 18th century explorer who is virtually the first “white man” to explore inland Africa, on foot and canoe with a couple of companions, and soon, alone, encountering the roots of the slave trade—and its moral consequences. He also barely survived.

I am in awe of Steven Brand’s performance and interpretation, as well as the tremendous care he took with all the African languages and antiquated English he was given in the text.

"Travels" inspired the imaginations of audiences since its first publication in 1799 . Writers like Wordsworth, Melville, Conrad, Hemingway, and T. Coreghessan Boyle have all acknowledged the influence of Park’s diary on their work.

A gentleman in the jungle

A very diffident, self-effacing member of the British scientific classes (in the "Age of Wonder") was the first European to write of his explorations and adventures in Africa, with its warring tribes, its tradition of slavery and thuggery, its tropical diseases, hyenas, wolves, and natural beauty. His diary, reproduced here, captivated readers in his time, and still surpasses almost every travel story ever told. It reminded me of "Incidents of Travel in Central America, Chiapas, and the Yucatan," except in this true-life adventure, the author put his life at risk almost every day, with a stiff upper lip, of course.

was clearly as remote as the dark side of the moon to the European of the same time period. As such, this story of a single man’s exploration must stand as one of the most remarkable s courageous journeys in history. That said, the last three hours of the book are devoted to a somewhat tedious critique and reconstruction of Park’s route...in an apparent attempt to further instruct contemporary explorers. Nonetheless, it’s importance as a first source historical document cannot be overemphasized. Particularly illuminating is the indictment of Arab and African slavery indigenous to The continent long before the first white man ever attempted to explore the interior regions. These observations should provide remedial thought to present day revisionists who wish to attribute African slavery to the Europeans and Americans Alone. Not to say Parks excuses or apologizes for Eur
White abduction of natives into slavery. Far from it. But it is clear from his observations that years before the cotton gin when New World slavery became really economically viable continental Africans Arabs and Moors had practiced the pernicious institution for centuries.