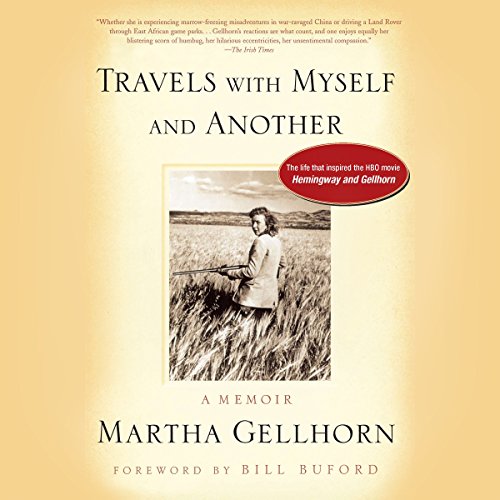 Including a foreword by Bill Buford, Travels With Myself and Another rediscovers the voice of an extraordinary woman.

"Martha Gellhorn was so fearless in a male way, and yet utterly capable of making men melt," writes New Yorker literary editor Bill Buford. As a journalist, Gellhorn covered every military conflict from the Spanish Civil War to Vietnam and Nicaragua. She also bewitched Eleanor Roosevelt's secret love and enraptured Ernest Hemingway with her courage as they dodged shell fire together.

Hemingway is, of course, the unnamed "other" in the title of this tart memoir, first published in 1979, in which Gellhorn describes her globe-spanning adventures, both accompanied and alone. With razor-sharp humor and exceptional insight into place and character, she tells of a tense week spent among dissidents in Moscow; long days whiled away in a disused water tank with hippies clustered at Eilat on the Red Sea; and her journeys by sampan and horse to the interior of China during the Sino-Japanese War.

"Travels With Myself and Another is [Martha Gellhorn's] most intimate book and not well-enough known. As Bill Buford wrote in his foreword to a 2001 reissue of it, in the complexity of her observations 'she prefigures the works of people like Bruce Chatwin and Paul Theroux and Jonathan Raban and the renaissance of first-person adventure writing.'" (Dwight Garner, The New York Times)

"Whenever I meet someone who has not yet discovered this book, I attempt to describe why it's so marvellous...delicious reading." (Stephanie Nolan, The Globe and Mail)

What listeners say about Travels with Myself and Another

Although there are interesting moments, most of the time she is complaining about service in hotels, restaurants and elsewhere. Her endless racist comments about Africa are loathsome.

Travels with myself and others

Dark side of travel

At first the voice of the narrator seems too young for the age from which Martha Gellhorn writes. But after a few hours one becomes a accustomed to the narrator who hits the right note of edginess and humor.
By the end of the book I reconciled her focus on the negative aspects of travel with her opening observation that listeners seem most interested in the dark side, what goes wrong.

Rebecca Lowman is an awesome narrator. The book is fine, but stretches get tedious gives a sense of Gellhorn as a person

Martha Bellhorn bares all as she describes the highs and, much more common and irksome, lows of "pioneering" travel escapades peppered throughput her life. This makes for a one-of-a-kind thoughtful read delivered via a strikingly authentic performance.
The reader feels as if she is really there!