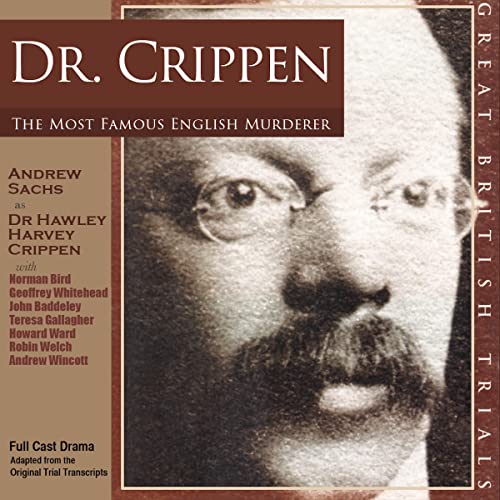 The Trial of Dr Crippen—the most famous English murderer.

Mild-mannered Dr Hawley Harvey Crippen committed one of the most notorious English murders of the 20th century.

In early 1910, he dismembered his wife's body and buried the remains in the coal cellar of the house they shared in Hilldrop Crescent, London. Arrested with his lover, Ethel Le Neve, who was disguised as his son, as they tried to escape to Canada aboard the SS Montrose.

His subsequent trial at the Old Bailey was expected to be a mere formality, but Dr Crippen pleaded 'not guilty!', and so begins this strangely moving tale of passion and despair.

The series Great British Trials provides a fascinating glimpse into some of the most notorious crimes and trials of the last 500 years. Using the original trial transcripts, eyewitness accounts and contemporary newspaper reports, we witness the actual events that made each trial a cause célèbre of its day.

What listeners say about Trial of Dr Crippen