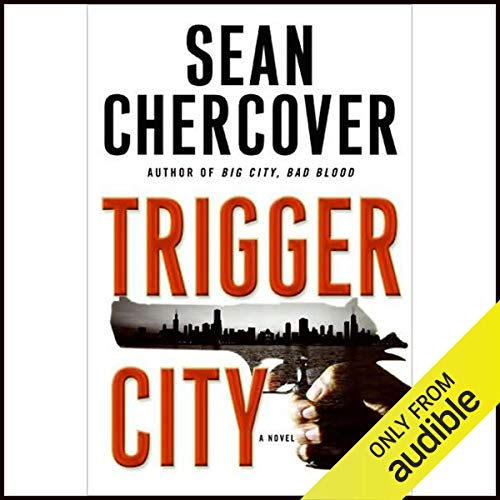 The facts: A lonely woman was murdered by her disturbed coworker. The police have investigated. The case is closed. But facts are not truth.

A routine investigation of an open-and-shut case is just what PI Ray Dudgeon needs to recover from the physical and emotional consequences of confronting the Chicago Outfit - until "routine" spirals out of control. The victim was no quiet, unassuming, unlucky single woman; she lived a double life in the shadowy realm of covert intelligence...and she died for the truth.

Suddenly, Ray's ensnared in a conspiracy of darkness that weaves its way through the very fabric of the nation, and in grave danger of becoming collateral damage in America's war on terror. And his greatest enemy may be himself.

Entertaining All the Way Through

Some books take a while to build up your interest. Some never get to that point. The last one I listened to, I had to give up on after a few hours - rare for me.

It was nice that this one was entertaining from start to finish. Joe Barrett was a new refreshing voice for me - you can get tired of hearing the same great voice over so many adventures by different authors.

I enjoyed the action, mystery, political subtext, and the ending. I can't figure out why this book is only showing as a 3.8. The ending may have something to do with it. Good doesn't always triumph over evil - but can sometimes do just enough to keep a little of it at bay.

This is a good introduction to the colorful, imperfect detective. Ray Dudgeon and the backdrop of Chicago makes this a ripping good yarn.

Chercover is fresh and original. The crime novel seems to have a formula that you see over in over in most books, but Chercover has taken a different approach to make the protagonist real. And having lived in Chicago for a number of years, I agree with the way he portrays this great city, and bemoans the loss of some of its gritty character.

What made the experience of listening to Trigger City the most enjoyable?

Chicago is a dirty, gritty city. There are cops on the take, and the government is corrupt. This is the background for Checover's novel, apparently the second in a series involving detective Ray Dudgeon. Chercover's first book, Big City, Bad Blood, is on my list to read next.
Ray smokes too much, drinks too much, and has awful luck with women. He has a general distaste for authority figures, but gets along well with his cop pals. He's asked to learn the "truth" of a woman's death for a grieving father, and winds up finding a lot more than he bargained for.
If you like hard boiled detective fiction, you will like Chercover's work. I liked it so much, I decided to go read the first novel in the series.

What does Joe Barrett bring to the story that you wouldn’t experience if you just read the book?

his voice characterizations were very good.

I just finished listening to trigger city and I thought it was great! The hero is a down to earth big city type that is wonderfully read by Mr. Barrett. If you like Elvis Cole, Joe Pike or Wambaugh's characters you will love Trigger City

First Chercover book and definitely not the last.

I really enjoyed this book. It was fast paced and there was a lot of action without lots wasted words. The narration was done quite well too. I will definitely add this author to my "watch for new books" list.

Would you consider the audio edition of Trigger City to be better than the print version?

Ray Dudgeon stays one step ahead of me, and I'm pretty good.

Have you listened to any of Joe Barrett’s other performances before? How does this one compare?

My first, but not last, from this author.

Main character was someone I wanted to put my arms around and say, "Life sucks, don't it?" Look forward to the next listen to learn if his life gets any better.

loved it. it's a great story. there are lotus if test and turns. really enjoyed

Ray Dudgeon Is An Old Time P.I. In Chicago

A second book in the Ray Dudgeon series. It is gritty and gets Ray into some pretty unbelievable spots. A bit conspiracy theorist story but compelling all the same. Ray is a self-doubting guy who just doesn't think he's good enough. He takes on a case to find out why Joan Richmond was murdered. Her father is a former Colonel and wants to find out more. The more almost gets Ray and everyone he loves murdered. Ray involves his detective Angelo, his best friend and journalist, Terry, and his best friend, Gravedigger Peace. All in all it is a fast moving detective/murder story that anyone who likes P.I. Stories and murder mysteries will enjoy. Not clear if there will be another book in this series but I'd recommend these first two. Sean Chercover is an excellent writer and he has the background to tell these stories and make them real.

I like audible books best and Joe Barrett is an excellent narrator. He portrays the voices very well. I'll be listening to more of his narrations.

sometimes, the story can be great, but if I can't get into the voice, then in doesn't matter. I have started searching for books bas ed on the reader. and Joe Barrett is a new favorite. like the story here too. right amount of action.