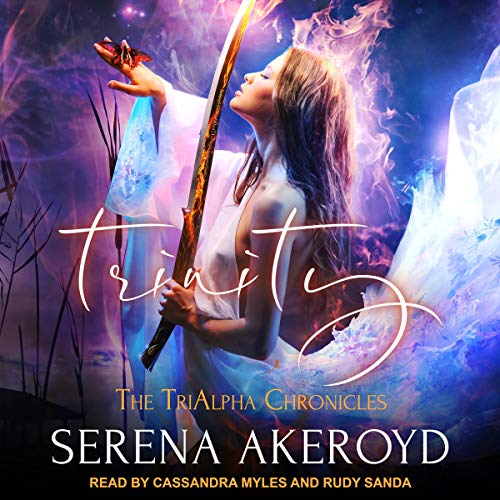 Thalia Lyndhoven was born a Pack Princess, but that doesn't mean she has to act like one. Good thing; peeing on her fathers' front lawn is way too much fun, as is making nasty Betas shiver and shake when she approaches.

Trouble is, for nearly a decade, Thalia has been alone. Exiled to her wing in the palace because her parents don't know what's wrong with her. Well, she's tried telling them but they don't listen - when do parents ever listen?

Still, what's a girl to do?

Approaching her 30th birthday, things have never looked bleaker until an Elder changes everything and in walks mate numero uno. He's nothing like anything she ever imagined, and through him, she finally sees what she was meant to do with her life.

Well, that, and kick the Pack where it hurts to take it from the 12th century to the 21st.

With her mate at her side, Thalia's realizing she's bulletproof, but what happens when her second mate pops up and destabilizes things entirely?

What listeners say about Trinity

My Ears Are Bleeding!!!

The male narrator is Horrible!! The accents are so bad it makes me cringe and flinch every time he talks! I'm gonna have to return this as I can't take any more! I recommend just reading the book instead of putting your ears through the torture of listening to his over-the-top fake southern twang accent!

This is an amazing story and leaves you wanting more. Very strong female MC!! It’s kind of more rare in the RH genre. Cassandra Myles as the female narrator was amazing but I usually love all her voices and was not disappointed in the least by this performance. Male narrator though? I hope they got him on discount because unfortunately his voice kind of ruined this performance for me. At some points I was just hoping it would switch POV so I wouldn’t have to listen to him anymore. His regular voice is good but the voices he used for the characters was really bad. Not to mention his “female” voices... *shudders*.

Absolutely loved this book! A strong independent and believable female protagonist being kick ass! i cant wait to listen to the next book!!!

This is an interesting story. I read it before it was available on audible so when I saw it here I bought it without thinking. I was happy to see dual narrators since having a Male and female for the different perspectives is always a nice touch. I enjoyed the female narrator, but after hearing the Male I would have preferred just one narrator. His voice acting is frankly horrible and ruined the series for me. His southern accent almost sounds like hes trying to make fun of it, that's how bad it is. And his female voices? Ugh. I hated his chapters Haha

Male narration ruins it - read this one instead

Narration:
Female narrator does a good job.
Male narrator is fine for the male lead (Raph), but all his other voices absolutely GRATE on the nerves. And his accents are too much.

Story: enjoyed the story for as long as I could stand the male narrator. I’ll finish the book on my kindle, instead.

Like the others I find this to be an amazing story and the female narrator did a good job.

Please for the love of all things Holy, re-release with a new male narrator or hell just have Cassandra do the whole thing.

I am stuck on book 2 I can’t go on, Rudy’s attempt at a male’s southern accent is beyond laughable, the other male voices are dull and when he does any female character my whole body cringes.

Oh how I felt her struggles!
Being like life locked up and not able to get free!

Then to finally meet him! Yes, what a relief!
Then the second comes so fast.

interesting but narration was dicey.
It was a struggle at times to get pass the villianous sounding voices assigned to good characters.

The male narrator is really much worse then what I lead myself to believe. lol

I really liked the concept of this princess being the strongest of all the shifters. I liked the two mates that we meet of hers in this audiobook. The characters are well built and the world they live in is unique from any others I have read before. The main thing I struggled with was the length. It was slow until she decided to take her place and confront her dads and the council. I liked how it was moving after that. Some good steamy scenes and hopefully lots more to come. The narrators had easy voices to listen too but the guy narrator doesn't do women's voices well at all. I think this will be a good series.

I absolutely adored this book!

I was blown away by this book, I absolutely adored every moment of it, and devoured it in one sitting! It was action packed and an emotional rollercoaster, it was impossible not to be moved by Thalia's struggle and be amazed by her. The narration was fantastic, I think this series is going to be out of this world.

Wow, this was a fantastic first book in the TriAlpha Chronicles series. Thalia is an amazing character, considering the upbringing she has had. She is totally awesome, much stronger than anyone realises. I loved the storyline and can’t wait to start the next book, Triskele. I also listened to this on audio and the narrators did a brilliant job at bringing the story and characters to life. I love this authors books, they are amazing but I think this might be one of my favourites so far. Even if you haven’t read any of her books, give this a go, you won’t be disappointed

Rally good listen though the narration wasn't the

I really enjoyed the novel but I did find it a bit difficult to cope with the narration. the Male and female voice is done a chapter at a time rather than per person so the accents and voices change for each character.

The plot itself is brilliant but I'm disappointed on the male narrator omg it's excruciatingly painful to listen to him make those horrendous deep voice, (sorry Rudy) your normal voice is amazing pls do not change it. Thank you Cassandra Myles your amazing.

Thalia is a kick ass alpha who's been shunned all her life by her own parents the tri alpha kings and her own mother.

I loved the promised of this storyline. I can't wait for mate number 3.