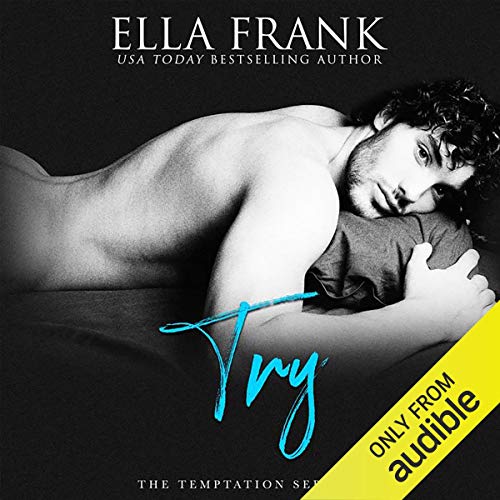 Try - verb: To make an attempt or effort to do something or in this case…someone.

Sex. Logan Mitchell loves it, and ever since he realized his raw sexual appeal at a young age, he has had no problem using it to his advantage. Men and women alike fall into his bed - after all, Logan is not one to discriminate. He lives by one motto - if something interests you, why not just take a chance and try?

And he wants to try Tate Morrison.

Just coming out of a four-year marriage with an ex-wife from hell, a relationship is the last thing on Tate's mind. He's starting fresh and trying to get back on his feet with a new job at an upscale bar in downtown Chicago.

The only problem is, Tate has caught the unwavering and unwelcome attention of Mr. Logan Mitchell - a regular at the bar and a man who always gets what he wants.

Night after night Tate fends off the persistent advances of the undeniably charismatic man, but after an explosive moment in the bar, all bets are off as he finds his body stirring with a different desire than his mind.

As arrogance, stubbornness and sexual tension sizzles between the two, it threatens to change the very course of their lives.

Logan doesn't do relationships. Tate doesn't do men. But what would happen if they both just gave in and…tried?

What listeners say about Try

I'll just straight up admit it: I'm totally in love with Logan and Tate. I cannot believe how amazing this story is. It has everything I want in a book. Creative characters that I can't get enough of, a story that's original and interesting and keeps me fascinated. And let's be real, Ella Frank is a phenomenal author. Her writing style is clean, she makes the story flow and doesn't fill up her stories with useless scenes and details. Shannon Gunn is the perfect narrator for this book. His voice is exactly what I imagine Logan and Tate would sound like. So incredibly sexy. Wow. Just wow.

Would you try another book from Ella Frank and/or Shannon Gunn?

Not a fan of Shannon Gunn. His reading has really lessened my enjoyment of a book I quite liked. Having read and loved the 1st 2 books of this series but having it read by Shannon Gunn I couldn't help think I was being read to by William Shatner's Captain Kirk. That's not a good thing in case you were wondering. While 'in character' he was tolerable (unless he was reading a female character, awful!), while narrating it was painful. Then throw in the lack of smooth transition from one chapter to the next. I'd be fine with no marking of chapter changes in my audio books but if you feel the need to do it please don't make it louder and completely out of timber with the rest of the reading. Gunn's loud and stilted 'CHAPTER 12' transitions completely jar you out of the story. A bad performance is an audio books worst enemy in my opinion and there seem to be a LOT of them out there.

Logan and Tate both are terrific characters. They are strong men with definite opinions who just blend well together.

Who would you have cast as narrator instead of Shannon Gunn?

I could see Hugh Jackman doing an amazing job.

Great book but the reading is very distracting. The reader should draw you in, not make you cringe, unless you're reading a horror novel.

repeated sexual assult is not ok and should now be promoted on audiable. end of story

If you like m/m erotica, it's a great book - but not the best audiobook.

My recommendation: read the book instead of listening to it.

Excellent story that I have read many times and Shannom Gunn added to the story with perfect narration! 5 stars!!

Loved the book, hated the narration

I wanted to re-read this great book and decided to try (pun intended) the audio (whispersync).
It was really bad! The narrator grunted and groaned OTT (over the top). It sounded like he tried too hard so it just ended up awkward and then ridiculous. I also felt the MCs voices were all wrong. Tate sounded like an old man or something. It was just... wrong. I only made it to about 20% before I had to stop. The narration totally put me off the book and since I've already read it once before I *knew* the story and loved it. I actually listened to bits of the story later in the book to just make sure, because "is it really *this* bad?" And yes, it really was. I ended up laughing out laugh at one of the sex scenes I've just read and knew was hot. The narrating of the same scene? Not so much. So steer clear, and just read this great story and fall in love with Logan and Tate on your own.

I have read this book a couple of times (yep, its that good) and I am not generally an audible fan, but I figured what the heck, I'll try it. (no pun intended!). Boy am I glad I did! Shannon Gunn has done an amazing job brining Ella's words to life and it has elevated this story to a whole new level! I also discovered the hard way it is NSFW!

Can't get enough! Have even downloaded more titles read by this narrator. Have Take and am waiting anxiously for Trust, book #3!

Where does Try rank among all the audiobooks you’ve listened to so far?

I rated this my best read of 2013 and after listening to it I'd definitely rate it even higher if that was at all possible!
Logan and Tate have so much chemistry it is amazing. The story is interesting and the sex scenes are HOT.

Shannon has become my favourite narrator. He has a really easy voice to listen to and puts plenty of emotion and nuance into his work. He also is consistent in how he portrays each of the characters speech throughout the book.

If you could rename Try, what would you call it?

It couldn't possibly be anything but TRY

only made it to chapter 5

I was on a role with great books and this one just sucked . no offense to the author but she knows nothing about gay sex . sorry had to say it . like just no storyline.. its sounded like a great read but after chapter 5 i gave up . the narrator was awful . I mean you don't know who's opinion is who's not all gay men are whores

About to start reading the whole series again. Loved it from the first hour, although took me a while to get used to Shannon Gunn. His voice for Logan was spot on though, and I could just picture him talking like that. Not so much for Tate, but once you get to know Tate's character, Shannon's take on him kind of worked too.

Can't recommend this series enough, I chain listened and really missed the characters after I'd finished, hence my imminent re-read. Shame I can't get any of Ella Frank's other works with a decent narrator, as wanted to read about Robbie afterwards, but couldn't stand Charlie David. Same goes with Finlay. Ella's writing flows and I loved her character development and dialogue between characters.

Logan and Tate develop beautifully together and all the angst they go through helps to cement their total devotion to eachother. About the only thing that irritated me was Tate's reaction to some situations as he's a thinker and a bit slower than Logan to see what's infront of his face. Tate's family scenes were horrendous, and I was glad that his mother was not featured at all after that. Not sure why Logan's nemisis was introduced other than for Logan to see how totally over him he was, as that part didn't seem to go anywhere. Cole was the best support character and I'd like to know more about his meeting with is wife. Logan's mother was just awful but a lot about him was explained with her scenes.

If you like your MM romance raunchy, heartbreaking, funny and devoted, you'll love Logan and Tate.

Lose yourself in Tate and Logan's world. Wonderful audio! Will listen time and time again

This story is super hot and really hits the spot.

The only fly in the ointment is the narrator. Narrator, Shannon Gunn, must also be movie trailer voice over guy as well because he has just the voice for it. It was way too over the top for this kind of job.

Also, the way he voices Tate is hilarious and as sexy as my big toe.

I'll listen to the sequel as I want to know what happens but I won't order any more books narrated by the same person. I can't go through it again!

Interesting premise, stretched out, repetitive in places made this book impossible to finish. Narrator OK at times, but the over-excited style generates an uneasiness and tension unnecessary for a man drinking at a bar through most of the book, who likes to pick up the bar staff.

love listening to this book, Shannon Gunn voice is so hot , cant wait to listen to more x

This is such a slow novel I just could not finish it. Nothing happens, and if they interact inbetween the sex scenes, it's highly unoriginal. The narrator was fine but he had one shortcoming: he can't perform sex scenes. He went so over the top it was annoying, if it did not make me laugh out loud.

Great story - but I prefer the print version

I have read the book many times, so I thought the audiobook would be a good addition to my library. However, the narration and I just didn't mesh, and it was all a little too much. Yes, I know it's an erotica - but I like my erotica a little less salacious.

It just felt a little too over the top for me - too many 'crescendo' sounds in the audio that let me create less of my own world and felt like too much of it was created for me.

Do you think Try needs a follow-up book? Why or why not?

Well....there's Take and Trust, so yeah!

Although the audio didn't work for me, I absolutely love the book and would happily recommend.

I didnt want to love this because I am not a fan of multiple books about the same couple so I didnt want to get invested but I couldnt put this down. It had just enough to keep me interested and waiting for the next thing to happen. I am looking forward to finishing the series.

I've done a re-read/listen of this book because the sixth and final book of the series has just come out. All six books are about Logan and Tate and their journey to a HEA. Tate starts out as a straight, about to be, divorcee. Bi Logan walks into the bar where Tate works, hones in on Tate and makes it his mission to &quot;own him&quot;. So from that premise, we go on an emotional, drama filled, only slightly angsty, beautiful journey to get an ending Tate had no idea was even a possibility and for Logan, it was never on his horizon. An excellent series and great audio by Shannon Gunn too.