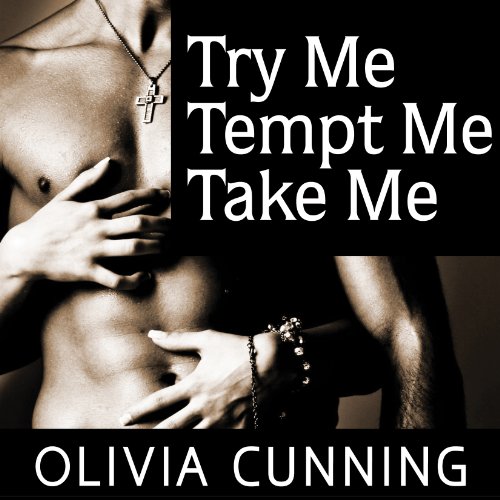 Try Me, Tempt Me, Take Me

For the five rock gods of Sole Regret, finding love is easy, keeping it is hard. This anthology contains the first three novellas in the One Night with Sole Regret series.

In Try Me, Sole Regret's crafty drummer, Gabe "Force" Banner, seduces a straight-laced accountant before she realizes she's talking to a rock star. In Tempt Me, Sole Regret's troubled lead guitarist, Adam Taylor, might finally be ready to commit to the woman who saved him from a life of despair and abuse. In Take Me, Sole Regret's enigmatic vocalist, Jacob "Shade" Silverton, tries to keep his cool around one off-limits woman from his past, but she just might be too hot to resist.

I really enjoyed this book. I just wish there was more. The stories follow the same time line and I like that. The characters are dynamic, funny, sexy and unique and appear throughout all the stories. I just wished it was longer:( This is very similar to her Sinners On Tour series,which I loved. So, if you liked that series you will like this one. If you have not tried the other, than you are missing out. I really hope that she goes back and develops each characters's story more. It just leaves you wanting more. Therefore, for story I will only give it 4 stars but for everything else it is a 5 !! I don't know what it is about her books but they just suck you in and I can't stop listening. So don't wait go get this series and her Sinners on Tour Series. Totally worth the credit.

Good but too short!!

This is three stories in one book. Each one tells a story of a different member of Sole Regret. Each story is a short story and totally hot!!! I liked them well enough but the stories all ended just as they got stared good. Nothing like the Sinner On Tour series but good for novellas. Wish the stories had been more complete but still would recommend. Olivia Cunning is the greatest!

It is truly ONE NIGHT!!!

Okay, I LOVE when an author (or publisher or whomever) puts several shorts into one book. I never want to spend a credit on a short 2 hour book. That said, I enjoyed these books and hope they put the other stories on audible but each story is just as it says in the title, ONE NIGHT! Each story is one night with a different rock star in the group. Cool? Yes Hot? HELL yes! Definitely good, but you can't get as in depth with a couple in one night. I love the Sinners books and these are good too, but not the same. Once the other stories are put onto audible I will certainly get them and listen to them as well. The narration is good, as JOK always does a great job.

The stories are good, but do leave me wanting for more I won't be getting.

I guess coming off the Sinners tour it is hard not to compare. Maybe the let down is that I was excited and couldn't wait for this to come out. I mean literally couldn't wait. It was okay, but I must admit I really expected more. I was a bit disappointed. Well, they warned us.

I must say Justine O did not disappoint she was right on. I still Like Olivia Cunning and now patiently waiting for Eric's story later this month. I agree with one of the other reviewer It would be nice if she tie this series up and give us more of their lives so we will know the entire scoop. It was just cut short and sort of left you hanging. I hate that- The sex was hot, but the story was lacking. Yes, I like it all tied up in a nice little bow.

Everything I wanted and needed

I have just finished my repeat listen of Sinners as i had this book on my pre orders and wanted to Tune-In once again to Oliver's fabulous work. She has definitely out done herself with this book. I thought it couldn't get better than Sinners but Wow was i wrong. This is another very Hot and exciting listen. The book has everything you desire form a Olivia Cunning book. Foce is my favourite Stud in Sole Regret. He is so thoughtful, forth-coming and powerful at the same time. Mmmm Yummy. Justine O. Keef Held you captivated from the first word with her amazing way of portraying each character. I imagine everyone who loves Oliver's work will Not be disappointed with this book - at all. TOTALLY SUPERB......

The story was surprisingly fun and engaging. I like Melanie, she is a down to earth girl and really snarky! I loved her dynamic with Gage. They were super fun together and the banter was terrific.

This is a really short read but it sets things up very nicely. I am intrigued by the other bad members and what will happen to each of them. I am also really interested in the way each couples story is told in three separate parts and the other guys books interconnect. Really clever for drawing in series readers who must know what happens next, like myself!

The sexy scenes are very delicious! Oh boy, they will get you panting for relief! The second smexy section when they play with the toys is my favorite!! Man does that boy know his stuff!

Book #2 - Tempt Me
Books like this one are the reason I am not into Rockstar Romances. I prefer a whole fantasy HEA where the couple meets and never touches anybody else. That is not generally the case in these rocker books, but that is the lifestyle they lead.

This is the second book in the series and it is a really interesting read. The characters are engaging and dynamic. The story is well written and interesting, many different levels. It is just the general Rocker lifestyle I am not into. If you are fine with less than faithful actions then you will feel differently than I do, granted he did explain he did not feel they were in a relationship.

The steam factor here is off the charts! Loads of hot and smexy action. I mean they had tons of sex and there was plenty of variety. Good lord they must be chaffed! This is the majority of the book and when I say it is hot, I mean you are going to have to read this one while in the cold shower!! Wowza!

The ending will leave you hanging, but that is what Ms Cunning planned, each couple's story is broken up into three parts. The whole series looks to be 15 books long, each band member has three books and the stories interlock. The first five are the first part, books 6-10 the second parts and finally finishing up everything in books 11-15. It is a clever way to draw in an audience, even with my general dislike of the genre I will probably get hooked. I always need to know the end of the story, no matter what!

Book #3 - Take Me
Shades has been a jerk throughout this series and it was no surprise to discover that is just who he is most of the time. Even when you have his POV, he is less than loveable, but there are girls out there who are into this kind of guy. Amanda seems really sweet and put together, one has to wonder what she sees in Shades. She is definitely thinking with her girlie parts.

Holy hot and heavy!!! I am talking steam up your ereader!!! Wow, once they decide to get it on, they get it on, big-time! Like the other books in the series most of the plot revolves around copious amounts of steamy smexy sex! This is another one you will have to change the panties after reading. Although, there is one scene where Shades shows he is even an egomaniac in bed.

The narrator, Justine O. Keef, does a great job I really liked her voice and characterizations. She is definitely a selling point in the audio version. If the other books get released on audio I could see myself picking them up, I am a curious creature and this series does a terrific job of drawing you in, even when you are fighting the whole way!

Loved this book! If you like sexy bad boy rockers, you will love this! Olivia Cunning is a genius!!!

First of all OC is at the TOP of my favorite authors and I love, love, love JO's narration. I pre-ordered this book as soon as it was available and waited for months. I hate to say the wait was not worth it to me. I knew the stories were short but I just feel like they were previews and incomplete. They all left me hanging and unless OC is planning to write a book on each band member like she did in the Sinners series then I'm gonna be let down. They all have things I, as a reader (listener), need from a book to feel satisfaction from that book. Maybe I should not compare this to the Sinners concept but it's hard not to. Hopefully OC is planning to finish up the Sole Regret series with more detailed books and preferably the rockers will get their own books.

If your a big fan of OC like I am then I'd say go ahead and get this one. If you've never tried her books before then try her Sinners On Tour Series first.

Really enjoyed this book as I have her other series. HOT HOT HOT with a touch of sweetness from such man whore rockers that are meeting their matches. My main complaint, however, is that the stories are not complete. Have to go through the next books to get more of the stories with each band member.

Recommend it. Worth the listen!

Series is laid out unusually !

I’m enjoying the series, so far. This series is different from most, in that, each couple’s story is broken up into different novels/novellas. I’m hoping that this style doesn’t make the couple’s’ journey seem choppy. I feel like it will affect my connection to the characters and their struggles. This author’s writing style always leans to the erotica side. I’m downloading the next book, in the series, now in order to learn what new adventure is in store for the members of Soul infraction .
As far as the sexual content, it’s really explicit so if detailed, kinky sex bothers you, pick another series to listen to.

Would you consider the audio edition of Try Me, Tempt Me, Take Me to be better than the print version?

Yes I enjoyed the narration that made it come more alive

What was one of the most memorable moments of Try Me, Tempt Me, Take Me?

the plot and the characters

Which character – as performed by Justine O. Keef – was your favourite?

Madison her Texan accent was brilliant

loved it can't wait to listen to the next volume.

good characters and plenty of sexy storylines to follow up in the next few books.