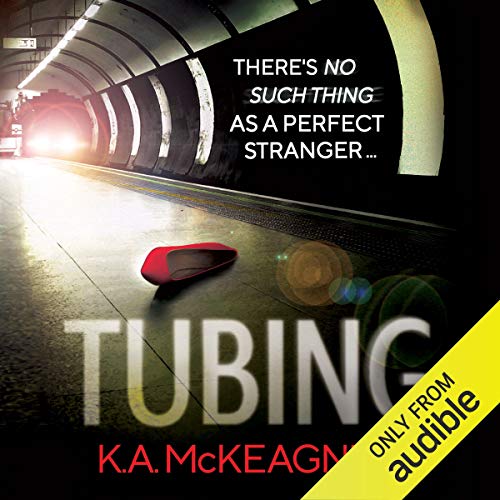 Polly, 28, lives in London with her 'perfect-on-paper' boyfriend. She works a dead-end job on a free London paper.... Life as she knows it is dull. But her banal existence is turned upside down late one drunken night on her way home, after a chance encounter with a man on a packed tube train. The chemistry between them is electric, and on impulse they kiss, giving in to their carnal desires. But it's over in an instant, and Polly is left shell-shocked as he walks away without even telling her his name.

Now obsessed with this beautiful stranger, Polly begins a frantic online search and finally discovers more about tubing, an underground phenomenon in which total strangers set up illicit meetings on busy commuter tube trains. In the process, she manages to track him down, and he slowly lures her into his murky world.

At first she thinks she can keep it separate from the rest of her life, but things soon spiral out of control. By chance she spots him on a packed tube train with a young, pretty blonde. Seething with jealousy, she watches them together. But something isn't right, and a horrific turn of events make Polly realise not only how foolish she has been but how much danger she is in....

Can she get out before it's too late?

Casual racism aside, not a bad read. Weak ending.

I liked the narrator but I was truly offended by her portrayal of a Black woman from South London and the accent she adopted whenever that character (Alisha) was present. I get that people from London can be racists and will make remarks about Black People in a flippant manner, but within the first 3 minutes of meeting Oliver, he came across as a racist fool and I was immediately put off. Especially since his remark had no bearing on the rest of the story and just felt like the author simply wanted to be "cheeky" for no reason. Charlotte also turned out to be racist fool but that doesn't matter since we barely see her and even though she turns out to have been the catalyst to all the tubing drama, we never really get to know her and that reveal was rather flat.

I don't know if the author intentionally wanted her rich, white, entitled characters to also be racists or if this comes from her own real life but I feel like my ears were accosted every time the narrator tried to sound "Black" and I have no idea why the only Black character in the story had to be from South London with that specific kind of accent in the first place. It feels like the author's own real life bias is spilling out into the book. Nevermind the fact that the only reason Alisha's character ever popped up was to offer advice, comfort or defend the main character - typical Black Best Friend nonsense. She only exists to support Polly. This book should have been set in the 80s. Very offensive but in the most unoriginal way.

The characters were all unlikeable and underdeveloped and the plot really made no sense. However, the author clearly enjoyed writing those sex scenes and I have to say I found the concept of Tubing surprising and intriguing. Had the rest of the story been written as well as those sex scenes this could've been an enjoyable book. But unfortunately it was a mess. The end was pathetic, super rushed with loose ends and the part with Polly's anorexia was disturbing and not handled well. It felt like the author seemed to know more about public sex than this very serious eating disorder. I really wish writers would do a bit more research and not gloss over serious illnesses like this. Next time just focus on what you're really excited about (in this case, obviously the public sex and anonymous hook ups) and leave the serious stuff to someone else to write. Sorry, definitely returning this one.

I really enjoyed this book!!!

This was a very easy to listen to, it’s was fun and will look out for more book from this author 👍

Really good book, was a bit concerned at first as it didn't seem the sort of book I was into, but as it went on it all started to fall into place, brilliant

First off, the book was actually written very well, and the narrator was fab. The story line had so much potential to be gritty and thrilling due to the originality of the premise. Sadly the main character was so flawed and downright horrible and selfish that I didnt really feel sorry for her- she made her bed so she needed to lie in it. I questioned all her decisions, just why would you do any of this? Not to mention how unbelievable the story was, it would simply never happen and relied on convenient coincidences to make it work. And to top it all off, the big reveal was underwhelming, petty and I struggled really to see the point... I found myself ploughing on in the first 6hrs just to see if the author would pull it out the bag with the potential for a big finish, but although the last 4hrs I was compelled to listen to in a day, I was ultimately disappointed. If you are a survivor of sexual assault this book should come with a trigger warning in a couple of short scenes too.

just couldn't get into it

voice actor seemed good enough, but I just couldn't get into the story. I couldn't finish it.