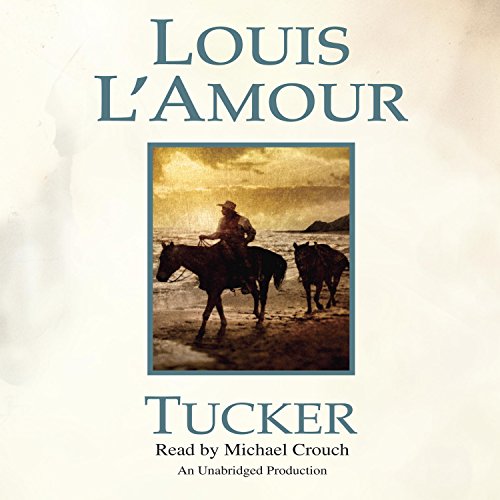 “If a man won’t fight for what is rightly his, then he ain’t much account.” With this challenge from his dying father, young Shell Tucker rode out after three men who had stolen the twenty thousand dollars his father was carrying. Two of the men he hunted, Doc Sites and Kid Reese, were his friends.

Dreaming of adventure, Tucker had wanted to join their gang. But now, with his father gone and the people back home desperately in need of the proceeds from the cattle drive, Shell was determined to uphold his father’s reputation and recover their money. He knew the odds were against him. Finding his friends would be difficult. Getting the money back would be nearly impossible.

What listeners say about Tucker

another life lesson, from Louis L'amour

Louis Glamour, read by Michael Crouch is again another fine way to spend your hours in traffic. To escape the present day city and travle in your mind horseback from Texas to Colorado to Nevada and Los Angeles in the 1870s it's always a great ride ,when you have Louis L'Amour at your side

Tucker on the hunt

What did you love best about Tucker?

What other book might you compare Tucker to and why?

Tuckers settling of the score with the thief who stole the money (when you listen, you will understand).

Tucker was a strong-willed, Who wanted to do what was right to those who trust in his father with the cattle. I enjoyed Tuckers difficult adventures that drove him to make right that was wronged.

The narrator has a suitably youthful voice. Here reads well and the story itself is quite gripping.

As with any of L' Amour's books there in a solid story that captures your imagination and makes you feel you are living it with the characters. I highly recommend it T anyone that enjoys adventure and the western genre.

This is another good L'Amour story, done in his normal style. Loving L'Amour like I do, it was very enjoyable. The narration was excellent at well.

fun book wish someone would record more Louis L'Amour books I know there are a bunch.

The story was pretty good with a convenient twist at the end. The reading of this story is what made it good. It was very easy to understand yet still spoken with excitement and softness at times.

Good story, good nararator, great for road trip. Will check out more by this author.

One of my favorite Louis L’Amour novels. Terrible narration. I tried twice to get to the end but gave up on it. I however read it again.