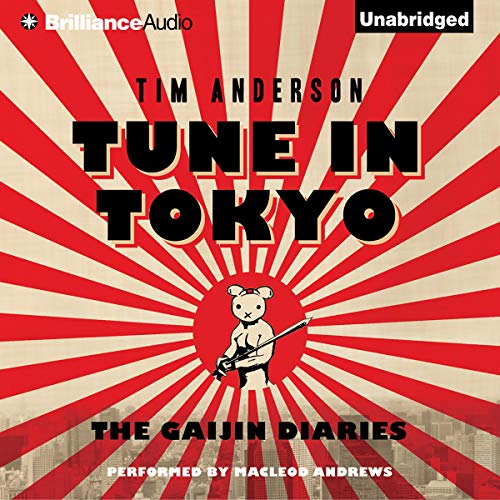 Everyone wants to escape their boring, stagnant lives full of inertia and regret. But so few people actually have the bravery to run - run away from everything and selflessly seek out personal fulfillment on the other side of the world where they don’t understand anything and won’t be expected to. The world is full of cowards.

Tim Anderson was pushing 30 and working a string of dead-end jobs when he made the spontaneous decision to pack his bags and move to Japan. It was a gutsy move, especially for a tall, white, gay Southerner who didn’t speak a lick of Japanese. But his life desperately needed a shot of adrenaline, and what better way to get one than to leave behind his boyfriend, his cat, and his Siouxsie and the Banshees box set to move to “a tiny, overcrowded island heaving with clever, sensibly proportioned people who make him look fat”?

In Tokyo, Tim became a “gaijin”, an outsider whose stumbling progression through Japanese culture is minutely chronicled in these 16 hilarious stories. Despite the steep learning curve and the seemingly constant humiliation, the gaijin from North Carolina gradually begins to find his way. Whether playing drums on the fly in an otherwise all-Japanese noise band or attempting to keep his English classroom clean when it’s invaded by an older female student with a dirty mind, Tim comes to realize that living a meaningful life is about expecting the unexpected...right when he least expects it.

What listeners say about Tune In Tokyo

I had started out getting the Kindle version and was part way through it and when I discovered it was available on Audible I got it quick! Audio books work out so much better for me that I was glad I could switch to the Audible format to hear the rest of the book.
I really enjoyed the story of the author's adventures in Japan. I thought it was an often funny story and would recommend it!
The Audible version is also a great example of how the right reader can really make the story great! He sounds a lot like Mathew McConaughey to me and does great with his accents when he's describing some of the other foreign characters in the story.
I think it's really worth the 'credit'!

Fun experences of an English teacher in Japan

This is a fun history of an average guy getting out of a rut in middle America by going to teach English in Japan. If you are interested in Japan and like travel stories, you will probobly enjoy this. Sections are not family friendly, but as the voice of the book is that of a 20 something out on an adventure, that should probobly be expected.

Good book to waste some time with.

Would you listen to Tune In Tokyo again? Why?

I've travelled and lived in Japan and love the country. This book was on a 5 dollar sale and thought it would be worth a try. The book is read by MacLeod Andrews who has a pleasant voice well matched to the tone of the book. The story itself is about a 20ish gay person visiting Japan for the first time to teach English. The book basically it a collection of experiences and interesting intervals which he encountered.

Would you be willing to try another book from Tim Anderson? Why or why not?

It would depend on the topic, I think he wrote pretty much all he could about Tokyo in this book.

The voice of the author is well suited for the tone of the book. Which in many cases is a bit cynical but funny. Speaking Japanese myself I

To book is good for some slow giggles and best enjoyed when relaxing or commuting.

Absolutely! The portrayal of my favorite country / city is spot on. For those that haven't visited Tokyo/Japan, the author does a great job at explaining everything that's culturally odd, endearing, and wonderful. It's also one of the funniest books I've listened to and the narrator completely nails it.

The best memoir about Japan / Tokyo I've ever had the pleasure of experiencing. Smartly written and, easily, one of the best narration jobs I've ever come across on Audible.

What was one of the most memorable moments of Tune In Tokyo?

Was it the drunk Australian teacher or maybe it was the Vagina Room?

I laughed all the way through.

I loved this book. The author was very engaging and very very funny.

Of all the David Sedaris wannabes, he comes close

Very easy to listen to, you can just zone in and zone out and not miss the actual story (mainly because these are little unconnected anecdotes). Perfect for quick city rides, because you can just listen to it for 7-8 minutes and still get some entertainment out of it.

Out of all the David Sedaris wannabes, this one actually comes closest to being occasionally funny. He is from Raleigh, NC - Check. He is gay - Check. He travels to Japan without speaking much of the language - Check. It won't have you roll around laughing, but good entertainment value.

Although the book is light and engaging, the experiences shared by Tim Anderson are very deep and personal. Funny from beginning to end!

find a little story about An American in Japan interesting. Teaching English at all levels.

Much ado about nothing

Tries too hard to be funny. Not much story at all which is too bad because he seems to be very observant from what little he does discuss. Very disappointing. I only made it to chapter two.

Listened to this memoir during my recent road trip down I-95 and laughed my way through NC, SC, and FL.

a funny insight to living in Japan

I picked up this audio book expecting a dry and factual travel story.. thats not what i got at all, its actually a really amusing tale of the authors life in Japan over the course of a year and a half while working as a English Teacher.. our litirary gaijin spins an interesting story of life in a way different from his suburban American roots with tales of psychotic drunken flatmates, strange customs and falling in love with a culture so alien to him.

Ok. you wont learn much in the way of Japanese language or customs from this book but you woll come away with a desire to experience the lifestyle yoursrlf someday.. a highly enjoyable read indeed.

I really enjoyed it. It gave me Sex and the city vibes, except the author has "an affair" with Tokyo. The biggest joy comes from the author. He is a gay english teacher in Tokyo with a strong pop culture sense that has his eyes open and doesnt shy from telling it how it is. but dont think about drama. This is always funny and it made me smile all the time.

This is not a book about Japan.

I loved this book, but a lot of reviews have been mediocre at best. It's not really a book about Japan in so much as it is a book about a guy living in Japan and acclimating to a very foreign country, it's a subtle difference but it's definitely there.

There are no answers here, for example the author tells of a group of men approaching young women on the street & following them for a short while, those men are partaking in "nanpa" (pick up artists) but the author doesn't tell you this because at the time he simply doesn't know quite what's happening.

This is basically a series of blog posts that have coalesced into a book, it's great & it's laugh out loud funny at times and the narrator has got the campy affectations of the author down pat and the book is all the better for it.

This isn't a book that will answer your questions about Japan or go into great depth but it's great fun. Go into this book with realistic expectations & you'll have a great time.

I enjoyed this book.

It's funny and well read. Also, the narrator seems to pronounce the Japanese words well - not that I would really know, but they sounded good!

Excellently voiced, this chronicle of culture shock when hitting Japan had been my favorite audio book to date. Some of the content is a bit inappropriate for younger listeners but I've laughed happily through it. Even keener to get to Japan now!

Fun, light ,entertaining world of drifter teaching English in Tokyo. Narration was excellent, insights gets you a little peek into fascinating world of Japanese culture. Jokes were a little forced / trying a little too hard. But overall was good listen on a commute.

if you've been to Japan, or thinking of going, then you will love this book.

Incredibly funny and down to earth

Where does Tune In Tokyo rank among all the audiobooks you’ve listened to so far?

The most enjoyable audiobook I've listened to on Audible so far! Love the narration, it's so down to earth and honest!