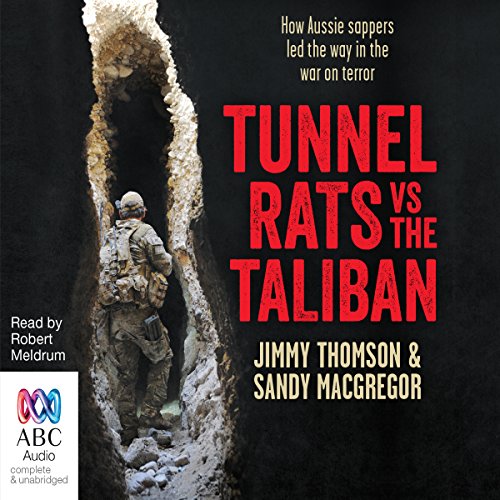 Tunnel Rats vs the Taliban

The extraordinary story of Australian sappers on the front lines of the war in Afghanistan.They are young, they are tough and they were the forward scouts in Australia's war against the Taliban.

This is the story of the sappers, the Army engineers in Afghanistan who learnt their skills from the original Australian Tunnel Rats of the Vietnam War.

Like their compatriots in Vietnam, the Tunnel Rats of Afghanistan have rutted out the enemy from deep inside their caves and hideouts, have defused thousands of improvised explosive devices (the booby traps and landmines of this most recent of wars), built bridges and schools to win a war of hearts and minds and lost mates at a greater rate than any other group of soldiers. And they, too, have returned home with the devastating baggage of war: post-traumatic stress disorder.

Inspiring and action packed, this is the story of a special breed of soldier operating in a modern war against a medieval enemy. It is a story that connects the unsung heroes of Vietnam with the modern heroes of Afghanistan.

What listeners say about Tunnel Rats vs the Taliban

'very very boring storyteller. Kept waiting for the action to kick in. The only action I got was slapping myself so I won't fall asleep.

Loved this book! As a soon to be combat engineer this was very exciting to listen to and very informative!