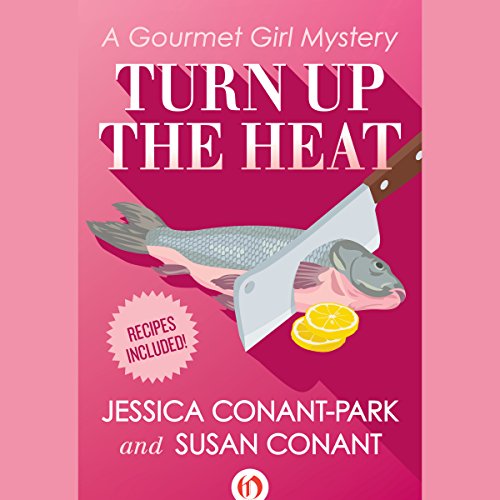 Foodie and sometimes sleuth Chloe Carter smells something fishy when a waitress from a popular new Boston restaurant turns up dead in a seafood delivery truck.

Having an executive chef boyfriend guarantees Chloe Carter the best table at Simmer, Boston's hottest new restaurant, any night of the week. But the Back Bay foodie's incredible comped dinners are usually enjoyed without Josh, whose pressure-cooker job has taken over his life. The same can't be said of Leandra, the pretty blond Simmer server whose body was just found in a seafood delivery truck. The truck belongs to Owen, the fiancé of Chloe's best friend, Adrianna. And Owen has no alibi for the night Leandra was strangled with her apron strings and dumped in his truck. But Chloe is sure he didn't do it.

There are plenty of other people with motive to off the unpleasant waitress, starting with Leandra's lover - and Simmer's owner - Gavin Seymour. And now some expensive cooking equipment is missing, including a mandolin slicer, an eight-inch chinois, and Josh's favorite knife. If Chloe isn't careful while trying to clear Owen's name, the amateur sleuth could be next to sleep with the fishes!

This audiobook features mouth-watering recipes sure to satisfy more than just your appetite for crime. Turn up the Heat is the third book in the Gourmet Girl Mysteries, but you may enjoy listening to the series in any order.

What listeners say about Turn up the Heat