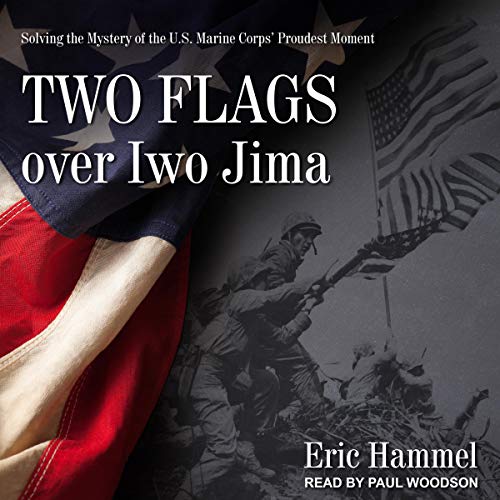 The saga of the flags on Iwo Jima has fascinated America for decades. Hammel himself grew up in the company of WWII veterans and has always been intrigued by the photo of the flag, which became a powerful symbol of patriotism and national pride. But the story of how the flag got there, and even the identity of the soldiers in the photo, has been muddied by history. Eric Hammel here sets the record straight, viewing complex events through the lens of the story of the infantry company in which all the flag raisers served.

Joe Rosenthal's Raising the Flag on Iwo Jima photo is one of the best-known images of US war history. The photo captures the moment that the first American flag flew over the core of Imperial Japanese territory on the top of Mount Suribachi. The focus of this audiobook lies on the 28th Marine Regiment's self-contained battle in February 1945 for Mount Suribachi, the 556-foot-high volcano on Iwo Jima. It was here that this one regiment defeated more than 1,500 heavily armed Japanese combatants who were determined to hold the highest vantage point on the island.

Hammel attempts to untangle the various battles that led up to the first and second flag raisings, as well as following the men of the 28th Marine Regiment in the events that took place after.