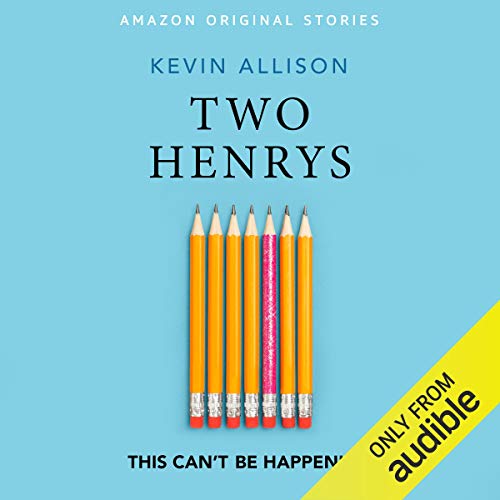 Coming out can be awkward enough. Now try it as a Catholic schoolboy in 1970s Ohio. In this fearless and funny true story, the host and founder of the hit podcast RISK! shares all.

From first grade through junior high, twelve-year-old Kevin and his best friend, Ben, were inseparable. But when Kevin divulged his biggest secret, Ben froze him out. The pint-size cold war lasted two years - until they went head-to-head for student council president. Team Ben’s smear campaign began. The school took sides. And Kevin decided to run with it.

Kevin Allison’s Two Henrys is part of This Can’t Be Happening, a collection of four true stories about making the best of a worst-case scenario curated by Kevin Allison, creator of the hit true storytelling podcast RISK! Outrageous, alarming, triumphant, and sometimes embarrassing, these fearless confessionals can be read, or listened to, in one what-on-earth-would-I-do? sitting.

What listeners say about Two Henrys

I didn’t know what to expect when I started this and I was pleasantly surprised to realize I loved it and I’m now a lifelong fan of this author! This story was beautiful, raw, funny, sad and felt very real. I highly recommend this!

Though I'm a straight old woman, I was still touched very personally and deeply by this performance. I literally laughed and cried - which I did not think would happen, going in. What a gift. Thank you.

There has never been a worse audiobook ever. The sheer way in which he speaks to his audience as though we are idiots in some lame attempt to relate childhood to his is grating and disturbing. especially when you consider the fact that this whole book is basically about sex.

Nostalgic, Funny, Compassionate! Give it a listen!

I really didn’t know what to expect , having no no knowledge of Kevin Allison. But this was funny and a great lesson on being yourself.. as someone who grew up maybe 10 years before the story takes place I could relate to a lot of the same issues. I applaud Mr. Allison for his wonderful story that hopefully teaches compassion to all who might listen

The horror and humor of coming out young

A funny and light story about a deep and painful subject for many, coming out of the closet. The younger it happens the more coping mechanisms we create to fit in or distract others from what makes us different. Kevin uses his humor and creativity to become a force of nature in his young world and refocus the attention away from his struggle with realizing he's gay and the all too real fear that being gay made him "weird" and "wrong" to those around him. A very well told story with a lovely ending.

This was a well told story.
I enjoyed it a great deal
I recommend reading it

Very sweet. I thought it was going to be all tragedy and drama - Betrayal! Prejudice! Friends become enemies, torn apart by hatred! - but instead it was quite heartwarming. Well narrated too, with just the right inflection to turn terrible kindergarten-age jokes from random nonsense into chuckling nostalgia. I liked it, and fully intend to listen again whenever I want a nice, innocent pick-me-up.

I am very picky about what I rate 5-stars...

...and I can assure you that this one is DEFINITELY a 5-star, award-worthy production.
I know that I'll be listening to it again and again... especially when I need a guaranteed 5-star listen (such as after I've wasted time/money listening to a dud). TWO HENRYS is packed with story and no filler (no wasted words/time).

OVERALL — 5 stars
I am perplexed that TWO HENRYS has received so many ratings/reviews that make it out to be less than what it is. How anyone could give less than 5-stars for this is a mystery to me—and it makes me sad to think there will be people who won't listen to this wonderful story because of those reviews, thinking it is just average (or worse). It is most certainly NOT. And I hope my review here will convince you to risk $2 to give this a listen. You will be so pleasantly surprised. I just know it. TWO HENRYS is so well done. I don't even know where to begin. It's like... WOW

PERFORMANCE — 5 stars
Let me start by saying I've never even heard of Kevin Allison, who both wrote and read TWO HENRYS. When I began listening I was not even aware that he was also the writer of this true story... if it is true—but even if it's not true, as fiction it would be no less a wonderful story. Kevin Allison really, by this performance, made it all so alive. That really sums up the performance: It was full of LIFE and full of joy and... well, riveting actually. There is true passion in this performance. Maybe that passion is why I personally believe the story is true.

STORY — 5 stars
Regardless of whether this story is, indeed, a true account from Kevin Allison's childhood, it is still a great story from it's beginning through the middle up to the ending.
(By the way, I disagree with another reviewer who said the beginning was slow. There were no slow points in TWO HENRYS and it never let up. The story grew continually and drew me in throughout).

THE BEGINNING perfectly captured the closeness of the friendship of the two Henrys and fleshed out each of them so that they were not, for the rest of the story, cardboard characters. They were real—whether they were true people or not.

There was no let-up in THE MIDDLE of the story, where stories often falter. It was fascinating to see/hear our Henry (Kevin) coming to terms with his personal revelation of who he was and how he dealt with that realization.
**I'm pausing here as I think back on it all and just marveling at how well done it was. I mean, even if a story is true, there is still great talent required in choosing which true events to include in the story and then weaving them together so well as Kevin Allison does in TWO HENRYS. For instance (without giving any spoilers here) his choosing to go from The Brady Bunch to Spin the Bottle to The Dream. [Read this review again – after you read/listen to the story – and you'll understand what is meant by those three things]**
This is truly amazing writing and TWO HENRYS should be regarded as a contemporary classic.

THE ENDING. Well, let me just say it's been a while – in spite of some recent 5-star reads I greatly enjoyed – that a story moved me to tears... and when this one did exactly that, it really took me by surprise. I mean, I already knew by that point that I was listening to a genuine 5-star story/performance, but since it was able to even bring TEARS out of me... that took it to a whole higher level in my opinion.

In summary:
TWO HENRYS really needs to be given some sort of award. It is quite simply AMAZING and should be used in writing classes as an example of how to do it right!
GET THIS BOOK! For $1.99 it is sooo worth it.
Trust me... you will love it.
If you do get it – based on my review here – and you also love it, tell me I was right by clicking the "Helpful" button below.

I appreciated that the author himself narrated the book. Gave it a great personal touch. Thought it was a nice, short story about his coming out in the mid 70s. Growing up myself in that same era, I found it hard to believe though some of the words the kids on the playground (at his Catholic school) used...at age six? Even if they heard the words from their older siblings, I don't know too many six year olds that can articulate, much less remember, words like that. Wasn't sure if that was exactly true or added to the story for a more comedic and exaggerated take. Either way, it a a great listen while doing my morning walk and shows the pains a child, or adult, goes through when making the decision to come out to their family and friends. Would recommend if looking for a short, true to life story with a touch of humor along the way.

I thoroughly enjoyed “The Two Henrys” and that the author read the story is a bonus! Kevin Allison weaves together a story of friendship that begins with very realistic little boys and develops into a story of acceptance. This clever, intimate story adds depth to ideas about growing up.