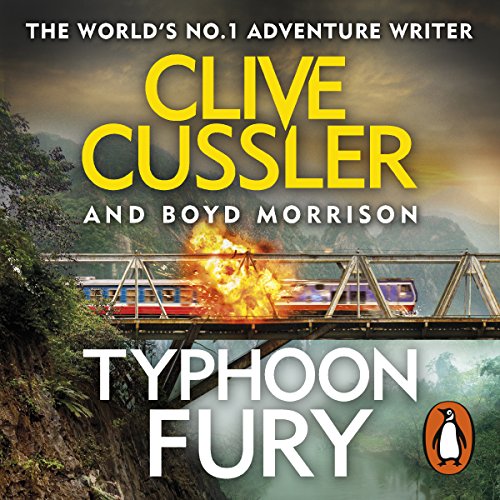 Seventy years after the end of World War II, Juan Cabrillo and the crew of the Oregon find themselves in deep waters as they try to stop a war that would engulf the entire continent of Asia. A search for an art collection worth half a billion dollars leads the Oregon to Salvador Locsin, the vicious Filipino rebel leader. But with access to a powerful serum designed to create an army of supersoldiers, Locsin's insurgency threatens more than just the Philippines.

To stop him, the crew of the Oregon must battle a ruthless South African mercenary, hundreds of swarming torpedo drones and an approaching catastrophic megastorm. If Juan and his team of elite operatives can't defeat Locsin and destroy all remnants of the horrific drug, the fall of the Philippines will be imminent. And with it, will come the beginning of a new and apocalyptic world war.

What listeners say about Typhoon Fury

well read great plot as usual from cussler and full of action, surprise and twists

A really great listen
Clive Cussler and his team are real masters of story telling.

Live the books and author but FFS. We all know an RHIB is a boat used by seals and SNB it means rigid hull inflatable boat. But please it’s pronounced RIB. Not R. H. I. B.

Phew! what a ride.

Beautifully narrated. Read or listened to all of the Oregon files up to this one. I can highly recommend them with Scott brick doing a fantastic job of bringing it to life.

Quality as usual.The writer's never let you down.


Scott Brick master narrator You forget it's one guy reading it, you just get drawn in to the story.

There’s always at least one episode in the Oregon story where there is an epic battle, in this novel there are a few! But honestly, the last five or six chapters really, really, really take your breath away! So exciting! I’m afraid that’s the only word I can find to describe it, and it’s not a very good word! But this was so enjoyable and had you cheering on the inside, for each success!

This is one of the best Oregon stories, and well worth the investment of your time.

Fantastic story,. I have read almost all of Clive Cussler's books and have enjoyed them all.

another cracking book by Mr Cussler.
gripping from beginning to end can't fault it
fantastic.

Clive Cussler has fuelled my imagination since I was a young boy, and thanks to him I have lived a life trying to attain adventures similar to his novels. I will alway continue to read/listen to these adventures and will pass them onto my family. Thank you sir! Typhoon Fury is a good novel, Oregon files are always a great way to escape the monotony of daily existence. alot of action, a great twist and a good story line. Enjoy!

really loved it. another exciting story. Would make a great movie. bring on more from clive

Another Great Book From the Master

Loved this book - as in depth as possible and easy to follow. Highly recommend it to all"readers".