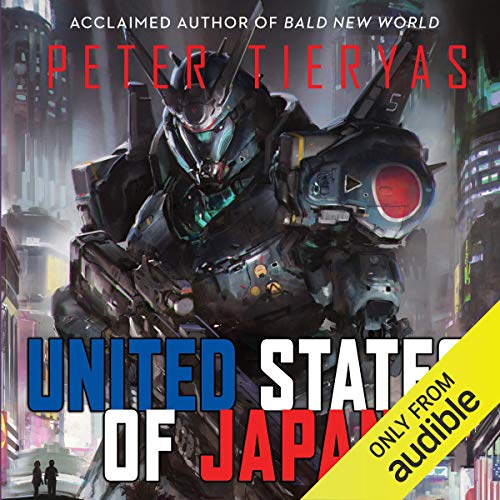 United States of Japan is set in a gripping alternate history where the Japanese Empire rules over America with huge robots. Is resistance possible in the form of subversive video games?

Decades ago, Japan won the Second World War. Americans worship their infallible emperor, and nobody believes that Japan's conduct in the war was anything but exemplary.

Nobody, that is, except the George Washingtons, a group of rebels fighting for freedom. Their latest terrorist tactic is to distribute an illegal video game that asks players to imagine what the world might be like if the United States had won the war instead. Captain Beniko Ishimura's job is to censor video games, and he is tasked with getting to the bottom of this disturbing new development.

But Ishimura's hiding something...kind of. He's slowly been discovering that the case of the George Washingtons is more complicated than it seems, and the subversive video game's origins are even more controversial and dangerous than the censors originally suspected.

A spiritual sequel to Philip K. Dick's The Man in the High Castle, United States of Japan carries on the legacy of Dick's famous alternate history, focusing on how Americans and Japanese deal with their guilt and troubled relationship to the past.

Peter Tieryas is a character artist who has worked on films like Guardians of the Galaxy, Alice in Wonderland and Cloudy with a Chance of Meatballs 2.

His novel, Bald New World, was listed as one of Buzzfeed's 15 Highly Anticipated Books as well as Publishers Weekly's Best Science Fiction Books of Summer 2014.

What listeners say about United States of Japan

An intricate look at a grim alternate history

I picked up United States of Japan on a recommendation from a friend and was expecting a fun but blockbuster-style action/adventure. Instead, I was totally blown away by the intensity and intricacy of the storyline and the ideas presented here. This is, at its heart, a very serious book. There are fun things like the huge towering mecha battles and a look at an alternate universe where technology took a very different course, but what really shines here are the characters and the decisions they make. This is not a world I'd want to live in, and it's a grim mirror to where we could have gone. The people here are making the best of a horrific society--some by trying to make it a better place, some by sinking into violence or depravity. The lines between good and bad people are almost non-existent. And in that backdrop, the story slowly and quietly spins out a tale of love, dedication, anger, and hope.

This is a brutal and often hard story to read, but one very worth reading.


the story was decent, certainly able to finish. I actually finished it in 2 days. I had some issues with the story, and some aspects seemed forced. I mean, The colored hair? why? My real issue was with the narration. The shaky voice made it almost unbearable. Also, the fact he couldnt pronounce "mecha" correctly was really annoying.

They story was well enough, not great, but definitely entertaining. The narrator on the other hand, with his shaky/nervous sounding delivery certainly took away from the overall experience.

As soon as I saw this in the Coming soon section, I put it on my wish list. I am a fan of this type of scenario. No, I don't want a foreign government to take us over, but neither do I want a Zombie Apocalypse, yet I enjoy those type of books I am a fan of Vaughn Heppner's Invasion series. I am also a fan of robots, especially giant robots. As another reviewer mentions in the first three hours, a robot is mentioned and that is it. I could not get past three hours. Peter Tieryas tells us things, but shows us nothing. Seemed more like a soap opera about some loser, than anything else. Peter has a great idea, he just needs to get a co/author to help with the writing.
The narrator sounds like he is on the verge of crying his eyes out, no matter what character he is attempting.

The pronunciation of words

The story is amazing. I couldn’t stand how the narrator would say Mecha and other words.

a great start to a very cool series!

I absolutely loved this book it was written well and the reader submerged me into the story. But and this is a big BUT the reader pronounced mecha as "meCHA" not as "meka", he was pronouncing the "ch" as "ch" would normally sound but thats not how anyone says the word mecha and to be honest everytime I heard that it drove me crazy. If your going to record a audio book about mechas or the story having mechs in them please investigate on the genere. Other than that I very kuch enjoyed the book. i recommend it.

Just an issue with one word.

Story was told well, but the word mecha is pronounced meh-ka not meh-cha. other than that, it was a really solid book and performance.

My only problem with this is the narrator. He wasn't bad, but he could have done better with pronunciation of certain words, especially 'mecha' that he continuously mispronounced as spelt instead of 'meka'. It almost threw me off the story until I figured out what was being talked about. Besides that, I totally love this story.

the story itself was great but that narrator was HORRIBLE. Constantly mispronounced words was just cringe-worthy

what kind of world would it be if Japan toke over the United States and America list WW2? it is kind of a scary thought, that is what this books is. America lost and Japan now runs the USA, with a good character story arc's. dark and grim world.

Don't be fooled by the cover..

Giants robots are mostly in the background in this novel.

Nice world building that rather overshadows the actual plot, and an ending that gives a finger to any hopes that this is not a one off.

NarratIon was good and understandable at x2 playback speed.

The performance is absolutely amazing. The setup is quite unique and well designed. The story is more like a tool that allows facts to be revealed from the past one after the the other, but still the story is pretty much OK. There is a lot of pain and violence in there, very slight optimism, but if you can live with that then you will find this book completely worth to listen.

I enjoyed the story enough to listen all the way through. It was a little ridiculous and there were parts that had me screwing up my face in disbelief. Beniko and Akiko were intresting characters and I liked both of them but I really hated the campy narration. The men sounded all sounded like teenage stoners and the women were all overly aggressive in their tone. I would reccomend as a curiosity but it's no Orwell novel.

Could have been so much better

Would you consider the audio edition of United States of Japan to be better than the print version?

If you’ve listened to books by Peter Tieryas before, how does this one compare?

First timer to this author

Could have been so much better

Good narration but the story didn't hold my attention. Struggled a bit to pay attention and finish.