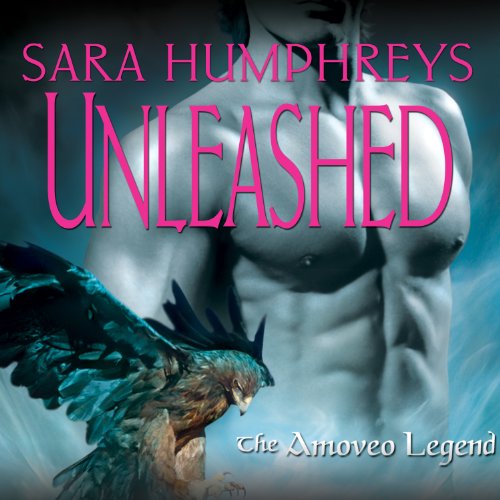 Samantha Logan's childhood home had always been a haven, but everything changed while she was away. She has a gorgeous new neighbor, Malcolm, who introduces her to the amazing world of the dream-walking, shapeshifting Amoveo clans... but what leaves her reeling with disbelief is when he tells her she's one of them. And shock turns to terror as Samantha falls prey to the deadly enemy determined to destroy the Amoveo, and the only chance she has to come into her true powers is to trust in Malcolm to show her the way.

What listeners say about Unleashed

A good start to a new series (and a not too bad cover either !!) about the Amoveo shape shifting clans (10 in all) who are being persecuted, tortured and murdered by the members of the Caedo who are humans who know and hate them.

This first book is about Malcolm, a gorgeous eagle shifter, who finds his one true mate Samantha after years of searching he finally starts dream sharing with her however she is a hybrid, part human/part Amoveo who has never heard of Amoveo and doesn't know, or want to know, of his world. Thankfully his patience, thoughtfulness and tenderness pays off as one night he flies into her bedroom and a little more (really, just a little more) than kissing goes on. Sam's life is in danger as traitors step up their game and kidnap her and her friend with deadly consequences.

SH builds the new Amoveo world, perks and abilities then the adventure soon starts as it captivates and thrills too with intrigue, danger, murder and deceit but it's also about trust, family, friendship and, of course, a sweet and tender romance. Lots of interesting, likeable, dislikable, and sexy characters are introduced to us and more slowly join the cast throughout the storyline.

Worth a credit? Yes, definitely and I'm looking forward to the next instalment.

Unleashed was completely unoriginal and predictable with a bland couple and even blander plot that could have come out of at least 100 Paranormal Romances. The writing style was choppy and brusque with ends of chapters that were uninspired and didn't make me want to read more. I finished it because I had it at 1.5x speed and the narration wasn't half bad.

Neither continuing with this series or reading this author again.

Narrator ruined it for me.

What was one of the most memorable moments of Unleashed?

It took me awhile to figure out just what I hated about the narrators performance. Don't get me wrong, she reads the story just fine, but that's just it, she just READS it. She could have been reading the phone book for all the emotion she put into it. No spark at all, it really ruined the story for me.

Also her accent's could use some work, I understand Malcom's accent was suppose to be difficult to discern (as mentioned in the story) but it didn't work for me. Worse was his butler's "British" accent, epic fail.

Yes I would, I actually invisioned this as a movie several times as I was listening to it.

This was a pretty decent story, not a knock-my-socks-off kind of story/writting, bits of it were predictable for me, but there was a "wow didn't see that one coming" element at the end, which always makes for an above adverage rating for me. I do think the author harped on just a tad too much about Sam's "independance" and made her headstrong to the point of annoyance. I think it can be tough for authors to balance female charaters, too much and you have a Sam, not enough and you have something akin to the awful charater in Kresely Cole's "A Hunger Like No Other" (GAG!!).

The story is a detailed view of a male, the mate of course, pursuing and revealing to a female knowledge of her unknown paranormal characteristics. There are some attempts at humor showcased most often in the barbed responses of the main female character and less often in the responses of her grandmother. And the approximately one-and-a-half sex scenes was hot but not explicit or raunchy. The romance might be considered hot by some, but it lacked a degree of sensuality IMO. And they were brief. The action was okay but also brief. Most of the story was teaching her about her past and herself, which just didn't work for me. And one comment was off-putting, which makes this author undesirable to me. She wrote that one desire was like a fat kid wanting cake. That comment was insensitive and ignorant, at the least, and prejudicial at the most and entirely offensive. It might have been another one of the author's attempts at humor, but it failed miserably and put a bad taste in me for any of this author's future works I come across. Finally, the story didn't hold together completely. I know this is paranormal fiction, but it still needs to be plausible and make it seem like "this could really happen. The author failed at that. For instance, the main female character, who is half-female and half-amovo, was able to perform paranormal feats that full-blooded amovo couldn't do. And she achieved it with no training. Now really! It just didn't fly, thereby calling everything into question. I was happy to get to the end of this book.