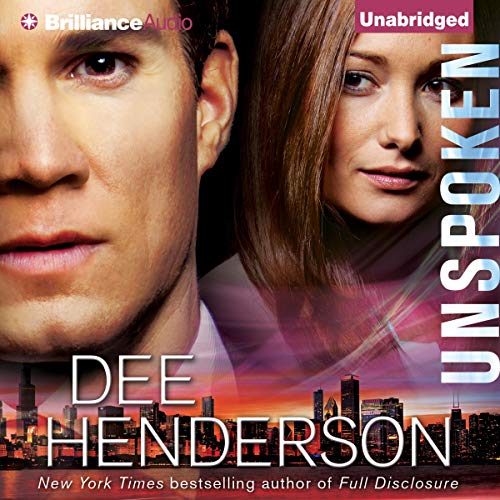 Charlotte Graham is at the center of the most famous kidnapping in Chicago history.

The FBI and local cops found her two abductors, killed them, and rescued her, but it took four long years. The fact that she was found just three miles from her home, had been there the entire time, haunts them. She’s since changed her identity, found a profession she loves, and rebuilt her life.

She’s never said a word — to the cops, to her doctors, to her family — about those four years.

A family legacy has brought her back to Chicago, where a reporter is writing a book about the kidnapping. Her options are limited: Either hope the reporter doesn’t uncover the full truth, or break her silence about what happened. And her silence is what has protected her family for years.

Bryce Bishop doesn’t know Charlotte’s past; he only knows she has coins to sell from her grandfather’s estate — and that the FBI director in Chicago made the introduction. The more he gets to know Charlotte, the more interested he becomes, an interest encouraged by those closest to her. But she’s decided she is single for life, she struggles with her faith, and she’s willing to forgo a huge inheritance to keep her privacy. She’s not giving him much of an opening to work with.

Charlotte wants to trust him. She needs to tell him what happened. Because a crime the cops thought was solved has only opened another chapter…

©2013 Dee Henderson. Scripture quotations are from the New Revised Standard Version of the Bible, © 1989, by the Division of Christian Education of the National Council of the Churches of Christ in the United States of America. Used by permission. All rights reserved. (P)2013 Brilliance Audio, all rights reserved.

What listeners say about Unspoken

Dee Henderson writes great stories. I have read several of these books and enjoyed them all.
They all seem to share a common theme - a highly traumatized woman meets a nice christian guy and by the grace of God he is able to help her heal.

I only have one semi-sarcastic complaint and that is everyone in these books says conversation constantly. Nobody ever has a meeting, discussion, argument, or talk - it's always a conversation. I don't think I have ever heard anyone in real life use the word conversation like that - kind of sounds like they have all been seeing the same therapist ;)

But in all seriousness - these are excellent stories! Well written and well narrated!

so much detail it got tiring. dragged on anticlimactic at the end. Just to long and boring details how they handled the money etc

Good story line - too long with too many details

Bryce Bishop is a coin dealer who is bored - at least that's what he tells God in a brief prayer before his life changes drastically. Charlotte Graham is the inheritor of her Grandfather's vast, vast, estate and wealth. She has ALOT of coins to sell. But she is also the subject of the most infamous kidnapping in Chicago history. She was missing for four years before she was found and she has not spoken to anyone about what happened during those four years. She changed her identity and with the help of her friend and bodyguard she had rebuilt her life and found a profession she loved that allowed her to remain anonymous. Now she finds herself burdened with managing her grandfathers estate. After some detailed research she secretly approaches Bryce with the option of being the outlet she needs to sell her coins. The price of the coins is so good he can't pass up the opportunity. And so begins a relationship like none he has ever had.

I have been a fan of Dee Henderson's for years but this is not one of my favorites. I did like the relationship between Bryce and Charlotte and how patient and tender he was with her. And I felt for Charlotte and how ugly those four years of her life must have been. And I admired her strength of character and the way she was able to re-build her life. Her struggle with God was real and believable. And I loved the characters of her bodyguard John and her friend Ellie. They did so much to support her and keep her safe.

However, there were WAY too many details about the coins!! And I just felt like the vast wealth they talked about from her grandfather's estate was so unbelievable! Maybe because I just can't imagine having that much wealth...lol. I listened to this story on Audible and maybe that's why it seemed to just go on and on and on about the coins. If I had been reading a print copy, I probably would have skimmed the majority of the first part of the book.

All in all, it had a good story line that for the most part I enjoyed. It just could have been a little shorter with less details on the coins.

Would you try another book from Dee Henderson and/or Adam Verner?

Yes to Dee Henderson. No to Adam Verner. His voice for Falcon was full of himself.

Would you be willing to try another book from Dee Henderson? Why or why not?

Yes. Based on her prior books - The O'Malley's and the True series.

Could you see Unspoken being made into a movie or a TV series? Who should the stars be?

would not make into a movie or TV series.

This book was very slow and drawn out.

I have read all of Dee Henderson's books. While it does annoy me a bit that she uses such perfect grammar because she is writing lines that a police officer would say, and they don't say things like, "I am going to the store 'via' the lake", or "'Nor' do I"... at least she stopped saying "cellular phone". lol!
Other than the grammar issue, she is a wonderful story teller and this is a really good one!

The narrator was good, but the voice he used for Paul Falcon was a bit goofy, so I only gave 4 stars on the performance. He did very well on everything else.

I tend to simply love anything by Dee Henderson -- I am fan for life!

One of the best stories

This book kept my attention all the way through! That says a lot! Lol I highly recommend it!

I really enjoyed the details of the story and the incorporation of other characters from other Dee Henderson books. This is definitely one of my favorites.

Wonderful story of emotional struggle, personal battles, and authentic love. This was my first Dee Henderson book but it won’t be my last.

I cried at the ending...

I have listened to every Dee Henderson book there is. I LOVE this author! This is a wonderful book about God's healing love of the broken.

Dull and hard to relate to

I really liked Henderson's early works, but this is the third (and likely last) attempt of reading her newer works. I don't know what has happened to the author, but all the spark has gone out of the stories and characters. I really struggled to care about the outcome and the "romance" in these newer works feels much more like an obsession with the idea of marriage than a natural progression of a relationship between the characters. I also found the super wealthy aspects of the story a real turn off. The narrator was fine.

What made the experience of listening to Unspoken the most enjoyable?

I never knew in which direction the story was going, kept me interested.

The main character, he was the MOST patient man EVER!! He really cared for the female lead.

Be patient with this one, it takes a while to get going, all that talk about coins!! It's worth it.

Great read, multifaceted and wonderful story. Can hardly wait for Dee Henderson's NEXT release. Loved their heart for giving, too!

Listened to these out of order but found this book after listening to Taken by the same author now need to go find Ann and Paul’s story. Love how the narrator changes his voice so much so easy to follow and reads at an excellent pace. The storyline is a little out there but fun and tragic at the same time would recommend to anyone who likes Dee Henderson or Irene Hanlon