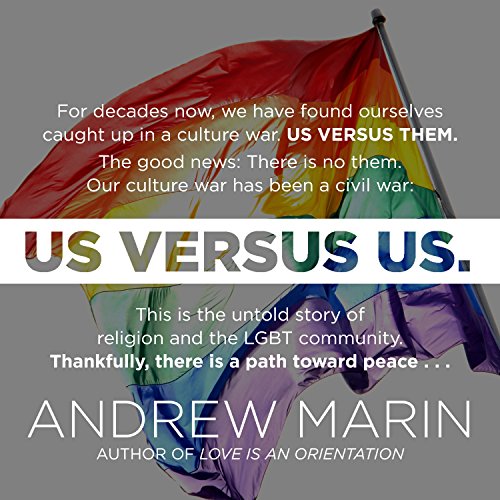 Would you believe that 86 percent of LGBT people - from the proud marcher at the Pride Parade to the quiet, closeted teen - spent their childhood in church? More than half of them left those religious communities as adults; three out of four would be happy to come back.

For decades now, we have found ourselves caught up in a culture war: us versus them. Good news: There is no them. Our culture war has been a civil war: us versus us. And there is a path toward meaningful peace.

Andrew Marin brings the startling findings of his largest-ever scientific survey of the religious history, practices, and beliefs of the LGBT community. Marin's findings offer clear direction for both sides of a long cultural battle to meet in the middle, sacrificing neither conviction nor integrity as they rediscover the things they have in common and the hope found in Christ alone.

What listeners say about Us versus Us

The value and thoughtfulness of the book kept me interested, even when the narrator seemed to be actively trying to sound like a robot. I'd recommend this book on the merits of its content only. Still, for a person like me, who may not sit long enough to read the print version, putting up with the wooden reading is worth the trouble. I ended up purchasing the e-book so I can go back and make sense of the statistics (there are lots of these, and they don't translate well to audio), and because there were points when the writing was inspiring enough to want to quote to friends.

I will recommend this book to all my friends that are Pastors, small group leaders. There was a lot of great information on how many of the LGBTQ community were raised in religious homes. I've been involved in ministry for the last 16 years and want to be a bridge between this culture war. I'm going to read your first book now.