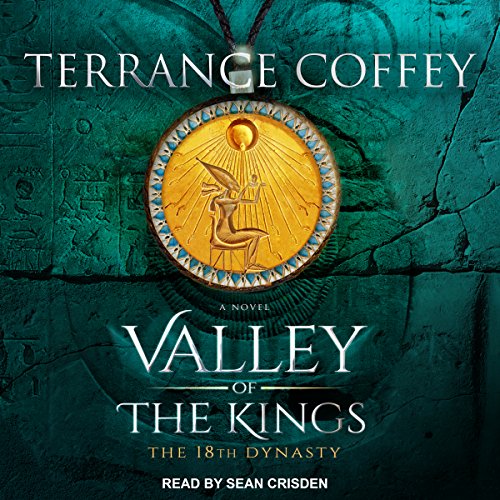 Valley of the Kings: The 18th Dynasty

After the untimely death of his older brother, six-year-old Prince Amenhotep IV becomes the unlikely heir to the Egyptian throne, the most powerful kingship in the ancient world. By the time he becomes pharaoh over a decade later, the growing influence of the wealthy and corrupt Amun priesthood threatens to undermine his sovereignty.

Desperate to maintain power, Amenhotep outlaws the Amun religion, renames himself Akenaten, and proclaims himself the living incarnation of a single, all-powerful deity - the Aten, or sun. With the help of his headstrong mother, Queen Ty, and his beautiful wife, Nefertiti, Akenaten erects a new capital in the desert and entices thousands of citizens to uproot their lives and join him there. But the magnificent new capital harbors a host of new threats: betrayals, curses, conniving relatives, murderous jealousies, plagues, famine, hidden heretics, and foreign enemies.

Inspired by the Hittite and Amarna letters of the 14th century B.C.E., Valley of the Kings: The 18th Dynasty is a novel of intrigue, passion, and betrayal, resurrecting the thrilling story of a singular leader whose beliefs were both visionary and disastrous.

story was short and rushed<br />

as far as historical accuracy dna proved nefertiri was never tuts mother no kemet language besides names as well.

Loved the book. An insight into the day to day of the most well known historical figures. Very well written.

I cringed when listening to the narrator’s female characters speak. Good story but it was hard to get past.

A better interpretation than most of Akenaten & Nefratiti

I have enjoyed interpretation of the life of Akenaten, but no one grisly knows how he and his wife died . They probably never will. He was quite mad though from the little they do know. Narrative was said to have been terrified of him near the end, but this book gives logical reasons I am going to look for book two now. Patricia Welsh

I love ancient Egyptian history, and particularly liked what I learned about Ay and the Amarna period, and thought it would make a good story, then I found this book and it did just that!