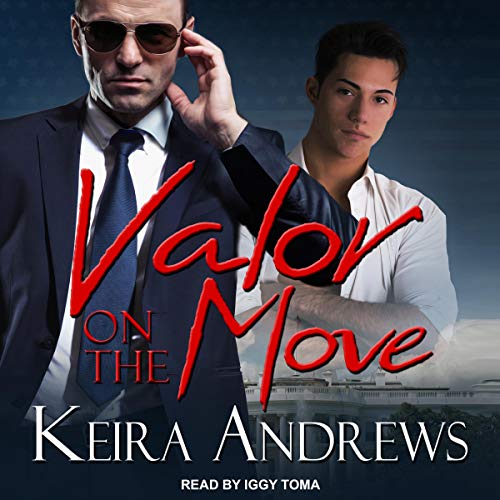 He'd give his life to protect the president's son. But he never expected to risk his heart.

Growing up gay in the White House hasn't been easy for Rafael Castillo. Codenamed "Valor" by the Secret Service, Rafa feels anything but brave as he hides in the closet and tries to stay below the radar in his last year of college. His father's presidency is almost over, and he just needs to stick to his carefully crafted plan. Once his family's out of the spotlight, he can be honest with his conservative parents about his sexuality and his dream of being a chef.

It's definitely not part of Rafa's plan to get a new Secret Service agent who's a walking wet dream, but he's made it this long keeping his desires to himself. Besides, it's not like Shane Kendrick would even look at him twice if it wasn't his job.

Shane's worked his way up through the Secret Service ranks, and while protecting the president's shy, boring son isn't his dream White House assignment, it's an easy enough task since no one pays Rafa much attention. He discovers there's a vibrant young man beneath the timid public shell, and while he knows Rafa has a crush on him, he assures himself it's harmless. Shane's never had room for romance in his life, and he'd certainly never cross that line with a protectee. Keeping Rafa safe at any cost is Shane's mission.

But as Rafa gets under his skin, will they both put their hearts on the line?

What listeners say about Valor on the Move

Narrator Iggy Toma successfully delivered a steamy, cheeky May-December MM romance. His fresh upbeat performance was flawless. He has a unique distinguishable voice, which I welcomed after a string of dark romances.

I enjoyed the story of the son of the President and his secret service agent. It was overall not a predictable plot, but rather easy listening. I loved Rafa’s personality, he grew up alone, inside a house full of people. He is independent, kind and mature. He knew exactly what he wanted, and he wanted Shane. We have some surprise action and tension, which contributed to a well developed world and character building.

I do recommend this audiobook. I will definitely listen to book 2 in the series.

I love m/m romance, coming out stories and coming of age books. This book is all of these and more. There’s action, adventure, May to September, cooking and heartache. There is a difficult bittersweet scene on the run that is just raw and beautiful. Keira Andrews ripped my heart up with the melancholy and stitched it up again with a sexy hea. On to Iggy Toma. Goodness, he is the perfect voice to tell Valor’s story. Of course, I love all his work and one click him without question.

not one of her best stories. the characters just didnt mesh together. the narration was just so-so as well. not sure if Im interested in the sequel.

I think given a different narrator, the book would have been 4 stars. As it is, it's just a basic story, nothing to write home about. there was a few scenes that I enjoyed. All in all, it's not a story I would would listen to again unless I had nothing to read

I loved how well the author brought us through the life experience these men went through together to get to where they did at the end. All of the different pieces of their lives that happened to make this work so well.

Interesting idea for a story. Certainly had some socially relevant topics. I struggled with a few suspension of disbelief moments. I wasn't quite convinced those characters would do those things at those times. That said... It was still an entertaining read, and I like the narrator.

Narrator score🎧 ; it was an incredible preference I loved it very much. the characters were

Level of steam🔥: it's a hot story especially in the second book. they have a nice relationship.

Level of anxiety and sadness0😱😢: not sad at all.

The book itself📖: this Duet is a cute story with an incredible of a fairy tail the son of the president and the bodyguard. but it's a bit deeper than that, this author just brings things to the next level the story could have been just another fairy tale and it wasn't. this author just made everything better. the Mc's felt so realistic that you felt what they did. it was amazing.

Great narration and story written by Keira Andrews. I really enjoyed how the older MC fought against giving into the attraction between him and the younger MC and how the younger MC stubbornness wouldn’t let him give up on getting what he wanted for his life.

The narrator is outstanding! The story is good! More than a 15 year age difference, u don’t usually see. But LOVE IS LOVE!

Rafi is so adorably awkward. I love that there was a real plot behind the romance. Funny, sweet, sad, and a lot of fun to read.

The ratings on Goodreads are surprisingly low for this book, but I’ve no idea why. It’s many times better than other m/m books in this genre and deserves much more. Perhaps Iggy Toma’s narration brings the book to life in a way reading the words doesn’t. He is a great narrator. Either that or people have a problem with the age difference (21 vs 39). As long as no one is a teenager I don’t really have a problem with age differences so long as everyone is happy - and I found it added to the story in this book.

I was completely engaged in this book, believed in the characters, enjoyed and story, and it was hot too. I look forward to reading the next book in the series!

Great story with some exciting moments and a love story where age differences dont matter, a great story and well narrated, enjoy

Slow moving and somewhat unbelievable plot. at least it had a happy ending. rather dissappointing

Not so Secret Service lol

Mature fully rounded full power love story. Such an amazing treat to discover this beautifully written and narrated book by an author new to me. It is rare indeed to encounter such a read, which delicately handles all MM issues, age issues, and work boundary issues with humour and good scripting, but is loaded with passion, tension, and desire.

I could not stop; listened in one sitting. There is action, excitement, stealth, tact, and positive values all displayed from MCs you come to admire, a credit to the roles they portray. There is very little swearing, a very pleasant surprize in a time where it's generally in every sentence uttered by M or F alike.

There is a Book 2: A Test of Valor. Have not had good experiences with Book 2's generally, finding they can reflect negatively on Book 1, so will not jump to get it........... yet.

Rafa aka Valor to the Secret Service is the youngest son to the US President, his new Secret service officer Shane is gay and falls for his younger protectee. He fights it until Valor is kidnapped, beautiful story, perfectly narrated

Loved the storyline but not the Aussie accent

I really enjoyed this book and the storyline but as an Australian, it’s really hard to listen to someone doing a really bad aussie accent. I’ve heard some bad ones but this was one of the worst. Why not get an Australian to narrate the Australian parts or use a voice actor that can actually do a better accent. I do normally like Iggy Tomas narrations but he should not do Australian accents as he sounded like a cross between Irish, English and Kiwi.

Sweet and passionate, I loved this tale of forbidden love. Age gap, American Royalty (aka Presidential Family) and Bodyguard all coming together to make for a sizzling hot drama with delightfully sweet moments as well as some very gasp-worthy twists in the plot. The HEA is hard fought and well deserved and brings such a wonderful feeling as you close the book.
Iggy Toma does a spectacular job narrating this story in Audio and brings our men to live with the perfect voices and an extra level of drama to the suspenseful scenes.

Rafa, 21, is the youngest son of the US President and has lived most of his life in the closet. He falls for Shane, 40, who is newly assigned to his security detail. Both have a lot to lose if things go wrong. I wondered whether this would be tacky given the age difference, but it wasn’t. It explored the pressures of keeping a lid on your sexuality for the sake of politics, had some thrilling action scenes, and developed the two characters well. Excellent performance by Iggy Toma!