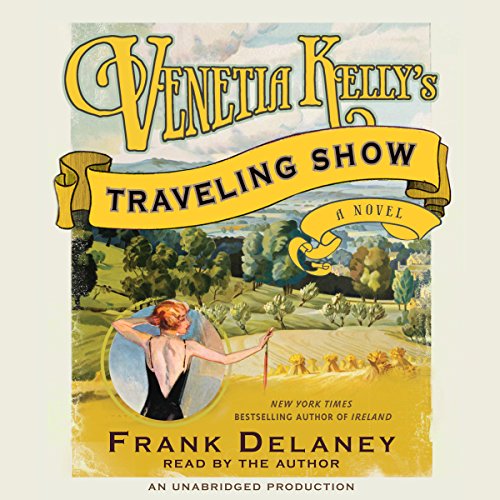 "She sprang from the womb and waved to the crowd. Then smiled and took a bow." And so we first meet Venetia Kelly, the beguiling actress at the center of this new, spellbinding, and epic novel by Frank Delaney, the best-selling author of Ireland and Shannon.

January, 1932: While Ireland roils in the run-up to the most important national election in the Republic's short history, Ben MacCarthy and his father watch a vagabond variety revue making a stop in the Irish countryside. After a two-hour kaleidoscope of low comedy, Shakespearean recitations, juggling, tumbling, and other entertainments, Ben's father, mesmerized by Venetia Kelly, the troupe's magnetic headliner, makes a fateful decision: to abandon his family and set off on the road with Miss Kelly and her caravan. Ben's mother, shattered by the desertion, exhorts "find him and bring him back", thereby sending the boy on a Homeric voyage into manhood, a quest that traverses the churning currents of Ireland's fractious society and splinters the MacCarthy family.

Teeming with intrigue, pathos, and humor, Venetia Kelly's Traveling Show explores two of Ireland's great national passions: theater and politics. Writing with his signature mastery and lyrical prose, Frank Delaney once again delivers an unforgettable story as big and boisterous as the people and events it chronicles.

Ben McCarthy is a grown man when he sits down to write about the year he was 18: the year he met Venetia Kelly. She was a beautiful 32-year-old woman headlining a stage act  the titular entertainment in Venetia Kelly’s Traveling Show  who so enchanted Ben’s father that he left his wife, his son, and his farm to join the troupe. When Ben’s mother sends Ben out on the road to find his father and bring him home, the entire McCarthy family is drawn into the tangled history of Venetia Kelly, her mother Sarah, and her grandfather King. Author Frank Delaney narrates the story, in a rich, well-paced tone that hits all the story’s emotional notes  and offers Ben a one-of-a-kind voice.

Venetia Kelly’s Traveling Show is an expansive novel, filled with strong characters  from well-meaning neighbors and ruthless criminals to shady politicians and men in love  and set against the backdrop of Ireland’s politically tumultuous early ‘30s. As a narrator, Ben makes it clear from the start that he’s prone to digression (blame the Blarney Stone) and that his view of the events has been colored by age; as a reader, Delaney gives “Important Digressions” and “Unimportant Digressions” the same care and emotion he gives to the novel’s dramatic high points. Delaney might be best known for his detailed novels about the Emerald Isle  which include the frankly named Shannon, Tipperary, and Ireland  but he also spent much of his life working for the BBC, where he covered current events and art, and hosted his own talk show in the early 1980s. His gentle Irish accent and mellow timbre are a charming complement to the novel’s witty prose and clever asides, and he handles the bittersweet ending with the proper blend of resolution and hope. Blythe Copeland

Once again, Frank Delaney has demonstrated that time travel IS possible. Delaney's reading of his own work transports the listener to Ireland at one of the most turbulent times in its resent past. Delaney is, without a doubt, the premier storyteller of our time, or should I say, Seanachai? Love this guy!

A beautiful and poignant tale

This is the fourth book I've read by Frank Delaney. I was smitten by "Ireland" and knew I had to have this new novel and it does not disappoint. What a consummate story teller! How adroitly he weaves into his stories the lore and politics of Ireland, of which he is eminently knowledgeable. He manages to make the twists and turns of the plot believable and the characters are so colorful. He does his own reading and it is superb, with his inimitable Irish accent, yet bringing to life German characters like the adorable housekeeper, Mrs. Haas. The ending is indeed bittersweet, yet somehow he manages to make us accept it, and brings the novel to a close so gently. I'm left wanting to savor it for days before I start another book.

My absolute Favorite Author and Narrator

My Fourth Book if Mr. Delaney’s and will seek out my next by him.

a glimpse to the past

frank delaney is a gift that keeps on giving intellectually and aurally.
i lost my self in this one.

Story of the Irish writ large and small

What did you love best about Venetia Kelly's Traveling Show?

Delaney wonderfully weaves together the spirit and complexities of personal loves and relationships with the national story of the emerging Irish nation.

What does Frank Delaney bring to the story that you wouldn’t experience if you just read the book?

Frank Delaney is a great reader who brings the rhythms of the language to life. I read the book and listened to it and each experience complemented the other.

At first I enjoyed the plot as a whimsical Irish tale, as that seemed consistent with the cover art and voice of the writing. But, it’s really just odd, sinister and full of distasteful characters. The book has no compass and takes the reader on an imbalanced ride that firmly ends in dissatisfaction. Sorry, I hated it.

one of my fav's

love his stories, love his voice, meter and delivery. he makes me wish i could live 12 lives in Ireland in 12 different eras

I have found a new favorite author!

And now I intend to read everything I can find by Frank Delaney. This book was captivating.

Another fantastic story by Frank Delaney

Once again, weaving through the Irish countryside, I walked through another world created by Frank Delaney, one of my favorite authors & storytellers ... I loved every minute of it. The characters developing through his magical words gave life to my commute and stretched my imagination along with my heart and my understanding of human nature and pain and forgiveness and compassion and love. Thank you, Frank & Audible!

Frank Delaney is a master storyteller. Each of his books is well worth reading. This one is no exception. I look forward to reading the second book in the series