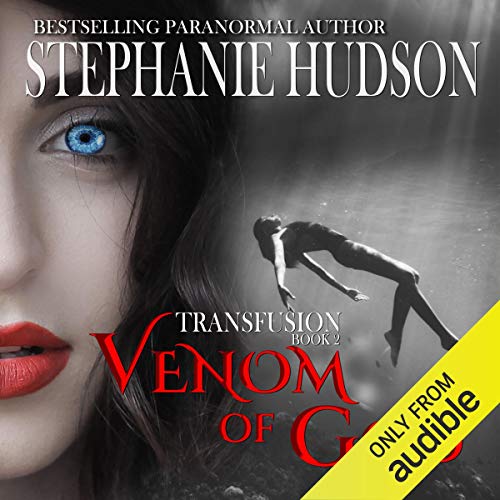 Foresight is a great thing.

It would have come in handy.

Like when I decided to try to steal from an angry Vampire King. Nope, probably wasn’t one of my better ideas. And now he’s decided he’s done waiting, whatever that means.

He tells me I have pushed the limits of his patience for the last seven years and now it is time to claim what is rightfully his.

Because now it turns out that I am not the only one with an unhealthy obsession. He just hides his better.

And as for me. I am now his prisoner who, unknowingly, just slammed the door to my own cell. And all because I stole from him.

Stole the heart of the notorious Vampire King.

What listeners say about Venom of God

Loving this series as much as the first series!

The only complaint I have is that it was decided to be done only by one reader, vs two. When the perspective changes back and forth between the two characters, both speaking in first person, it was confusing a couple of times. Otherwise the performance was great. (And really that was an editor’s error in choice, not the performer.)

Amelia is too whiny and too old to act the stupid!

Drawn out for a longer word count. Nothing has been explained as to why they are connected.

Great story with great narration. The plot is good but the series still has to much internal dialogue. It’s much improved over book 1. Amelia’s relationship with Lucian finally starts to take off and there is finally a romantic relationship between the two. Although there are still many bumps along the way. Including a nasty ex who is out for revenge!
Spoiler Alert !!!
Amelia and Lucian finally do the deed and things heat up 😈.

First book had too much internal dialogue. This book had much less. Lots of story and great imagination on the authors part, loving this story in book two.

I listened to the 1st and 2nd books and I don’t like the narrator because Clay, Pip and her mother sounds like my grandparents but actually should sound more youthful. Secondly, this girl can’t be any more of a submissive unless she gets her feelings hurts or fighting. Bipolar much?

the whining and the constant arguing got on my ner

I LOVE this series. Very addicting!! The narrator is great and the story is awesome!

could have been better

I feel like this book fell flat. I continued from the last story where I left off since I was curious to see if it got better, unfortunately I don't think it did. I felt like it just overly complicated things and the story didn't even know where it was going. I gave it a chance though.

Stephanie has an amazing mind to come up with all these story's. Her books are sexy and full of action..
Her Anti heros are just lush, Heroinws are funny clumsy and so brave...So looking forward to the nest one in the series...highly recommend her books, always....