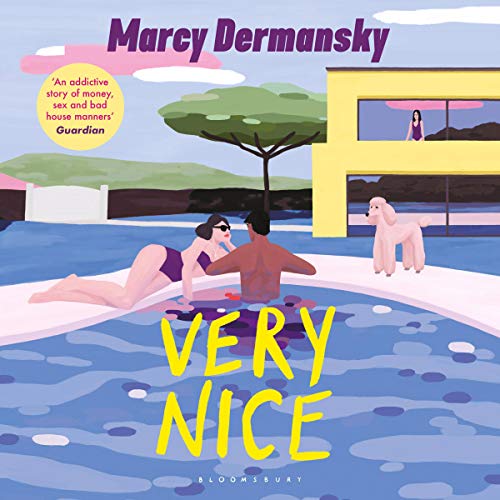 Rachel Klein never meant to kiss her creative writing professor, but with his long eyelashes, his silky hair and the sad, beautiful life he laid bare on Twitter, she does, and the kiss is very nice.

Zahid Azzam never planned to become a houseguest in his student’s sprawling Connecticut home, but with the sparkling swimming pool, the endless supply of strawberries and Rachel’s beautiful mother, he does, and the home is very nice.

Becca Klein never thought she’d have a love affair so soon after her husband leaves her for a younger woman, but when her daughter’s professor walks into her home, bringing with him a poodle named Princess, she does, and the affair turns out to be...a very bad idea.

An ingenious blend of sex, secrets and betrayal, Very Nice is a sharp, compulsive take on modern life from one of America's most exciting novelists.

"Very Nice is so sexy and reads so smooth that I was utterly addicted. Trenchantly observed and darkly funny, it will stick with you long after you finish its final, ferocious sentence." (Maria Semple, best-selling author of Where’d You Go, Bernadette)

"This is a vicious little novel, smart, efficient, mean, full of terrible people behaving terribly, incisive observations about a certain class of people pretending they had no hand in the state of the world. Writers don't come off too well, either. Absolutely delightful." (Roxane Gay, author of Bad Feminist and Hunger)

"Very Nice features a very spoiled apricot poodle, very yummy breakfasts of avocado toast, and a very naughty mother-daughter-professor love triangle - it's everything you need in your new favorite summer novel, and makes me very relieved I never got my PhD." (Kevin Kwan, best-selling author of Crazy Rich Asians)

What listeners say about Very Nice