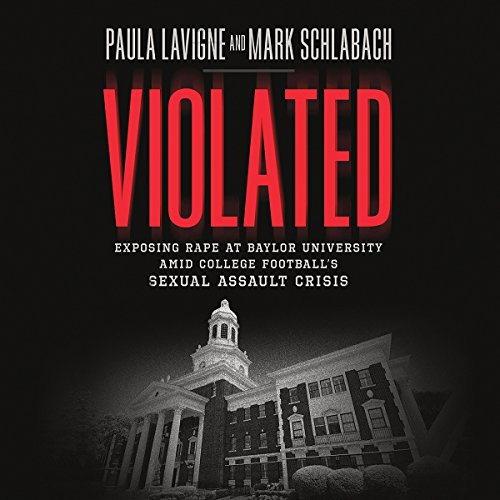 In Violated, two ESPN investigative reporters provide listeners with a shocking narrative of sexual crimes committed against women and a university's culture that kept them quiet.

Throughout its history, Baylor University has presented itself as something special: As the world's largest Baptist university, it was unabashedly Christian. It condemned any sex outside of marriage, and drinking alcohol was grounds for dismissal. Students weren't even allowed to dance on campus until 1996.

During the last several years, however, Baylor officials were hiding a dark secret: Female students were being sexually assaulted at an alarming rate. Baylor administrators did very little to help victims, and their assailants rarely faced discipline for their abhorrent behavior.

Finally, after a pair of high-profile criminal cases involving football players, an independent examination of Baylor's handling of allegations of sexual assault led to sweeping changes, including the unprecedented ouster of its president, athletics director, and popular, highly successful football coach.

For several years, campuses and sports teams across the country have been plagued with accusations of sexual violence, and they've been criticized for how they responded to the students involved. But Baylor stands out. A culture reigned in which people believed that any type of sex, especially violent non-consensual sex, simply "doesn't happen here". Yet it was happening. Many people within Baylor's leadership knew about it. And they chose not to act.

Paula Lavigne and Mark Schlabach weave together the complex - and at times contradictory - narrative of how a university and football program ascending in national prominence came crashing down amidst the stories of woman after woman coming forward describing their assaults, and a university system they found indifferent to their pain.

" Violated is a must read for athletes, coaches, administrators, and politicians who are committed to understanding the culture surrounding sexual assault that has led to its epidemic status and the inarguable need for Title IX guidelines. Violated literally kept me awake at night, not only reading it, but absorbing the many similarities to my own college experience at Nebraska." (Katherine Redmond, founder, National Coalition Against Violent Athletes)
"Lavigne and Schlabach have dug deep on the No. 1 scourge in college athletics. Violence against women in any form is unacceptable and yet it has been enabled (at least) by those who either don't want to know or are actively covering up. College athletics in general has been woefully weak in addressing this issue. Thanks to Violated the game is about to change. This is not only a Baylor problem; it is a national problem brought to light by the fine reporting of the authors." (Dennis Dodd, Senior Reporter, CBS Sports)

What listeners say about Violated

This book is informative and truly characterizes the breakdown of an institution. Very sad how this can happen at a Christian University.

Football players are guilty until proven innocent, instead of the other way around. This book reminds me of the saying “there is no worse thief than a bad book!”