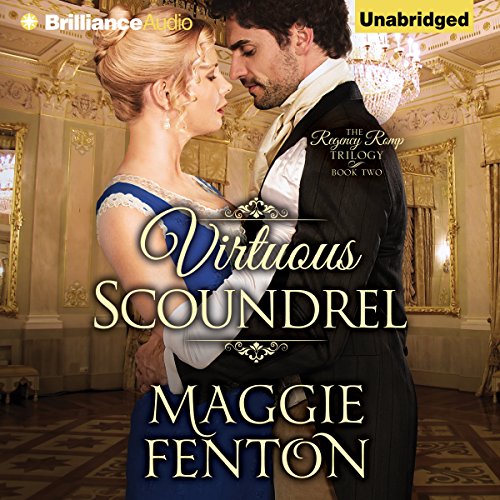 Sebastian Sherbrook, a self-proclaimed scoundrel and the newly minted Marquess of Manwaring, returns to London after his estranged uncle dies, intent on reforming his rakish image once and for all. Yet through no fault of his own, he's soon embroiled in the biggest scandal of the Season, and his secret plans to court the only woman he's ever wanted are in shambles.

Lady Katherine Manwaring knows her poor opinion of her late husband's nephew isn't about to change, even if the Times has dubbed him "The Single Most Beautiful Man in London." When fate casts Sebastian upon her mercy, however, she learns two shocking truths: he may not be the scoundrel his reputation suggests, and he's hopelessly in love...with her.

But an irate squire, an even more irate dog, several dawn appointments, meddling friends, and a touch of blackmail aren't the only things that stand in the way of their happy ending. Can Katherine accept Sebastian's love - and will he still want her if he learns her own dark secret?

Even though this is the second in series, it stands alone. But don't miss the first one because books 1 and 2 in the series are both really good. Maggie Fenton is a funny writer. The conversation among the writers is witty and entertaining. In this book the hero and heroine are both likable. She is his late uncle's wife, but he always loved her and is trying to overcome his undeserved bad reputation in order to win her love. The dogs play a big role in the plot and are very entertaining. There is a villain who has a hard time with the use of words - which is very funny. This is feel good book that kept my attention. I really liked it.

I tried to focus on the romance in the story but I laughed so hard I don't remember the couple.

The story was very comical and gave me my cheer for the day. The scenes were so ridiculous I am wondering how these characters truly function as adults .

Fun Romp through a Victorian Romance

I loved this book and her previous book. They both had me laughing out loud. Wish I could find more like them. Perfect escapism for me, light, but still well developed and a feel good ending! Thanks

My only complaint is that I now must wait for Maggie Fenton to finish her next book! Virtuous Scoundrel is a joyful continuation of the story from The Duke's Holiday with the added bonus of some excellent dogs. Sebastian and Katherine are just star-crossed enough to make their happy outcome particularly satisfactory.

I had forgotten how much I enjoy this author's work. Brilliant writing and a cute story! The characters are witty and smart and get themselves into predicaments. Well, mostly Sebastian. I enjoyed the appearance of the Duke and Duchess from the previous book. The ransom notes are laugh out loud funny. Truly a most enjoyable book. I can't wait for the next one.

The only reason I withheld a 5 star rating is the narrator, in my opinion, did not do a good job with Sebastian's voice. Made him sound like an idiot instead of a charming "rake." I still loved him though.

I adore looks like this. but, unfortunately by listening to the Books, instead of reading them; you can be listening to a perfectly good story, that's completely ruined by an terrible narrator. I can't believe they actually paid this woman to absolutely ruin my enjoyment of this book. I could not complete it. she had no talent at all. so I'm unable to read the book. I have to read it myself. note to authors. if you have a book worth reading, please choose a narrator who can do justice to it. or it will be impossible to finish for the listener.

This is a must-read for romance fans who need something lighthearted! There are a couple of way-too-serious parts for such a fantastic tale, thus the 4 stars, but other than those, this is a wonderfully written farcical comedy.

The woman who read it was amazing. She brought this (outrageous and) wonderful story to life!

This Audible book was practically perfect. The narrator lisped occasionally and two of her male characters had identical voices but otherwise she did a fantastic job. The book had several LOL places particularly a scene with 3 Regency gentlemen and a baby and the scenes involving an illiterate dog napper who thinks of himself as an 'entremanure' and meets in a 'corpse of Burch trees' to make the exchange. The book was not all lightness and fun though. There were adult references and a couple of intimate scenes which while not erotic were still descriptive. The heroine is a bit of a judgemental twit but she isn't too bad.

This was the most entertaining book I've experienced. I haven't laughed so much while reading.

I read a lot. There is nothing better than a book with romance, humor and a interesting story line.