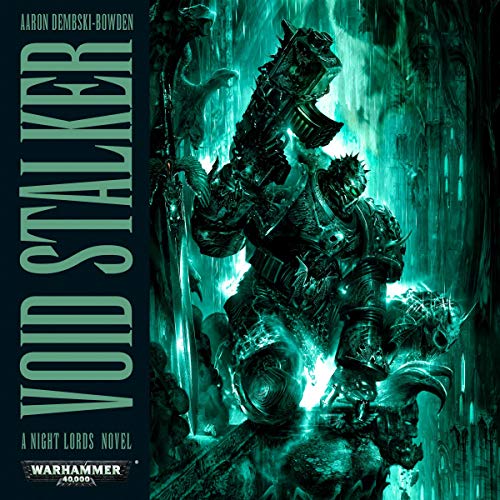 Hunted by the aeldari, the Night Lords flee to the world where their Legion was broken. Stalked by an alien assassin, they are drawn into a battle they are destined to lose.

LISTEN TO IT BECAUSE:

Fan favourite characters - who also happen to be amongst the most monstrous killers in the galaxy - in a fight to the death against the aeldari, with the fate of the future on the line? Yes please.

The hunters have become the hunted. The Night Lords flee to the dark fringes of the Imperium to escape their relentless pursuers - the aeldari of Craftworld Ulthwé. Their flight takes them to the carrion world of Tsagualsa, where their primarch died and their Legion was broken. There, history will repeat itself as a deadly assassin stalks the shadows, and the Night Lords are drawn into a battle they are destined to lose.

What listeners say about Void Stalker

I was in my seat every moment.
I hope ADB makes more night lord stuff.
Ave dominus nox!!!

I loved all three books. And I hope the Night Lords gets to continue their rampage in future books. A good ending.

There are a few black library series that I’ve really enjoyed and this one is within the top five on my favorites list.

A great ending to the series the epilogues definitely save the ending and make you hopeful for the eventual 4th book hopefully it doesnt get the gw treatment of in their time of need nonsense I would like to read that book to my children not my grandchildren.

must read. it finished up the series well. I highly suggest you read in order. have fun!

best of the trilogy!

couldn't stop listening to this book. definitely stands out amongst an already amazing trilogy. recommend!

what a story, Mark!
This was a damn treat! Where is the sequel!? I want to be a Night Lord now

A good story, made enormously better by skillful narration. I tried to read the print version, got bogged down and gave up. This audio version makes it accessible.

What an ending. What a performance. The Night Lords trilogy is an overlooked treasure and this book is its crowning jewel. Here’s hoping we get a follow up series about Decimus someday..

I can't put my finger on why, but I just wasn't as compelled by this story. Narration was excellent, but the Night Lords just couldn't find a way to worm themselves into my soul.

As with the previous Night Lords books by Aaron Dembski-Bowden this book is basically just scene after scene of appalling things happening punctuated by long scenes featuring the Night Lords being introspective, moaning about how awful their existences are. To be fair, if you were a member of the ridiculously villainous legion you'd probably be depressed as well. All the Night Lords do is do horrible things to people weaker than themselves and they do it over and over again in gruesome detail. I'm no prude but I just got sick of hearing about murder and torture at great length. It goes beyond horror and just becomes loathsome, particularly because we are then supposed to care about the miserable marines moaning about their lost golden past and the pointlessness of their aimless existence. Being a Night Lord's victim must be like being tortured to death by Morrissey. After a while you just wish they'd shut up and get on with it.

As with the previous two audiobooks narrator Andrew Wincott does a sterling job making it all sound vaguely plausible, but there's only so much he can do with the material he's given.

Amazing performance by Wincott as usual, and a poignant, gripping end to the trilogy! Aaron Dembski-Bowden is one of the most talented sci-fi writers of this generation.

this set of 3 books just gets better.
can't believe how you want the bad guys to win.
awesome

Another brilliant book in the series

What can I say, its a very well written book. The character arcs over the course of the series are great, there is a great mix of humour, darkness, introspection, action and buildup. It is well worth the listen. I just hope the series gets another installment

loved this trilogy well worth a listen, I was unsure on about the nightlords before listening to these books, but now they are amongst my favourites of the traitor legions

I thoroughly enjoyed this. Perfect ending to an epic trilogy. ADB is truly a master.

Fate is a fickle thing.
Some destinies are ironclad.
Some can be changed.
If you are here after reading the former two books you know of what I speak and will not be disappointed with the performance of this third installment. I enjoyed this immensely.
Ave Dominus Nox!

This series is just fantastic. I don't hear it mentioned alongside big hitters like Eisenhorn, Gaunt's Ghosts or Helsreach, but I enjoyed it more than any of them so far. Just incredible.

I absolutely love this series. ADB is a great author and I highly recommend him.

download is currently bugged, can successfully purchase and add to library, but cant actually listen to it. rip

The book is well written and well paced.
Characters are well developed and watching the characters mature and shift their priorities is enjoyable.
Strongly recommend reading this, specially if you’re a loyalist

do yourself a massive favour. BUY THE SERIES AND TAKE THE RIDE. absolutely amazing listen

Greatest in the trilogy

The third and final book in the nightlords trilogy is without a shadow of a doubt, the best of the three. And if you have read/listened to any of the others, you will understand how great this audiobook is.

Top quality as per usual. The characters really distinguish their individual personalities and great narration.