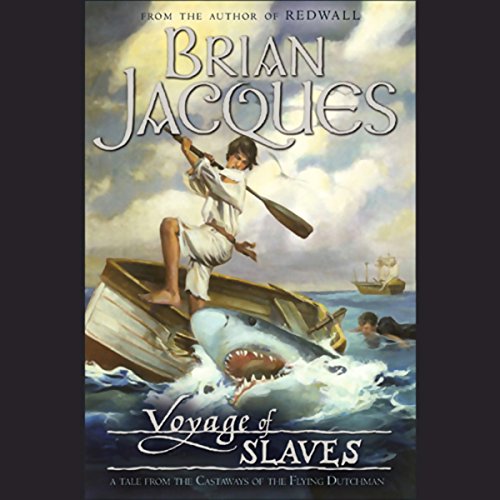 Voyage of Slaves, A Tale From Castaways of the Flying Dutchman

Adrift in the Mediterranean Sea, Ben falls captive to a band of slave traders and their leader, Al Misurata. With his faithful dog, Ned, at his side, Ben must plot escape as the ship of scoundrels sails up the Libyan coastline toward Italy, where a trap awaits.

Ruthless enemies and hard times appear around every bend, but Ben and Ned have quick wits to rely on and, just as important, one another. Fans of the New York Times best-selling Castaways of the Flying Dutchman series will only want more after this latest installment - a rousing yarn that's full of high-seas adventure!

What listeners say about Voyage of Slaves, A Tale From Castaways of the Flying Dutchman

I've loved listening to these stories and was soon to be very upset with Brian for his poor narration. Then I read the reviews... and listened clear through. Loved it. Just goes to show it's good to read the reviews :D Some stuttering, coughing (wonder if he had a cold) for a prologue but once chapter one starts it is a very well narrated story. Happy Listening.

The opening is a little odd (the author coughs and seems disoriented in his reading)! But never mind that. Afterward, it is a great listen.

don't be put off

Initially I was extremely critical with Brian Jacques narration as he is stuttery and coughs in the first 10 mins. He quickly warms up and delivers a wonderful rendition of an excellant story that kept me spellbound and not wanting to remove my earplugs. His characters are easily discernable and full of colour. I love this story and the excellant narration.

I’ve enjoyed this trilogy. It was the first of these that I have listened to on audiobook though. I eventually enjoyed the performance. I wasn’t too sure at first, especially as the reader was coughing and correcting himself in the beginning. The quality improved very quickly, however.

This is like listening to a live BBC story. really well done, great, diverse sounding cast and music. Brian Jacques has sold over 20 million books and theres a reason for that: he knows how to write a good story! i breezed through this in just a couple of days.

some of the other reviews mention that the first 10 minutes or so were not edited properly - which is correct. after that first small bit, the editing is very smooth.

I had been looking for this book in libraries and bookstores without success when I finally came across it on the audible store. I immediately bought it. It is really intriguing just like all of his books. However, in the first ten minutes or so he seems a little disoriented and coughs. But I still LOOOOOOOOOOOOOOOOOOOOVE it