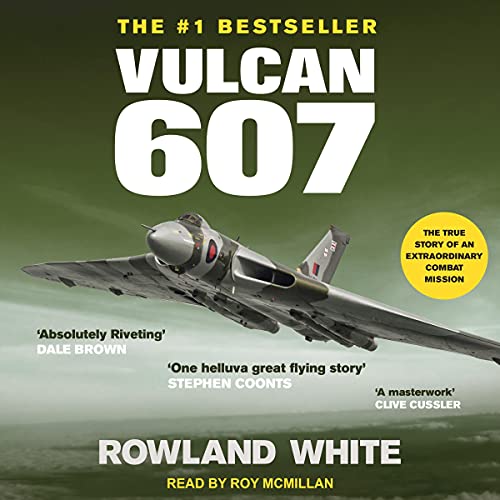 Shoulder to shoulder with Strategic Air Command B-52s throughout the Cold War, the big delta-winged Vulcans of the Britain's V-bomber force faced down the Soviet threat to the West. In 1982, they were just months from retirement when they flew in anger for the first time.

It was to be a record-breaking mission of breathtaking audacity: a single bomber launched from a remote island airbase to carry out what would be the longest-range air attack in history. An 8,000-mile round-trip. Her crew of six would be flying into a hornet's nest of modern weaponry: radar-guided anti-aircraft guns and missiles.

There would be no second chances.

Vulcan 607 tells the gripping true story of that legendary raid for the first time - an operation that many thought would turn out to be a real life Mission Impossible.

What listeners say about Vulcan 607

It just drones on and on, it was a great piece of history but the detailed description of every moment of the refueling mission bored me to death

What an incredible gem this book is
a fantastic tribute to the Blackbuck operation and to the hundreds of aircrew, engineers, technicians and logisticians that made the endeavour the triumph it was
A must read., thank you Mr White

Really good book, the reader did a fantastic job telling the story, there was a great amount of detail put in to the research of the book.

A great first hand piece of art.
Capturing the imagination what it been like flying the Vulcan 607.

An absolutely outstanding work! One of the best air war operational books listened to!